Unpacking the misconceptions marking the fight over election laws

President Joe Biden speaks in support of changing the Senate filibuster rules to ensure the right to vote is defended, at Atlanta University Center Consortium, on the grounds of Morehouse College and Clark Atlanta University, Tuesday, Jan. 11, 2022, in Atlanta. Patrick Semansky/Associated Press Photo 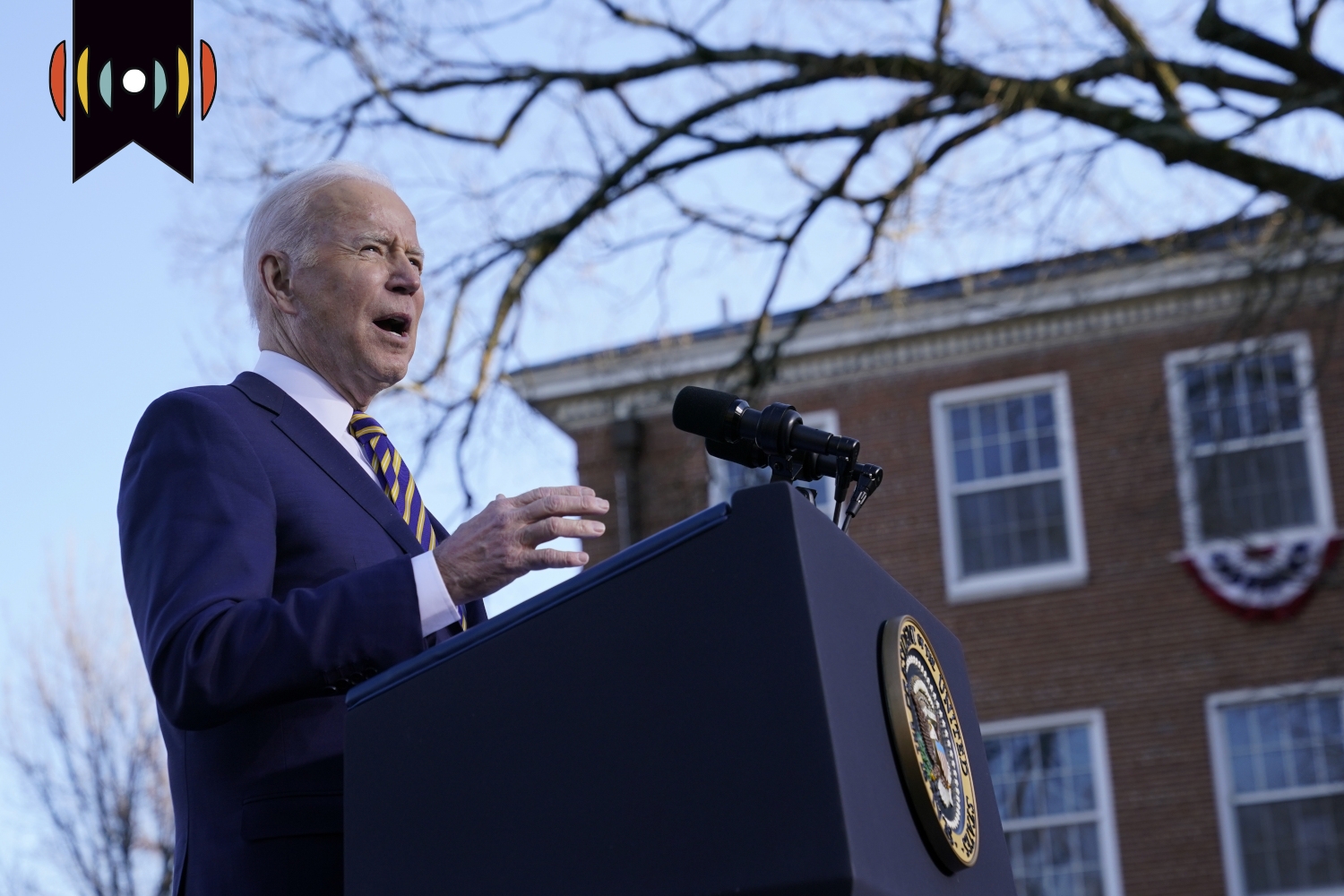 NICK EICHER, HOST: And I’m Nick Eicher. Up first: The battle over the ballot box.

Democrats recently renewed their push to pass a major overhaul of U.S. election law. They want to pass a sweeping set of changes that would shift more control over the election rules—from states to Washington.

Democrats charge that voting laws recently passed in Georgia and Texas are designed to make it tougher for minorities to vote. Some are even calling the laws—quote—“Jim Crow 2.0.” And they say that’s why the federal government must step in.

REICHARD: Republicans say it is Democrats who are playing cynical politics with race and call their charges incendiary and false. They say the changes are designed to better secure elections and help voters feel more confident in the integrity of future votes.

EICHER: But top Democrats are all-in on the issue. President Biden earlier this month made a trip to Georgia to campaign for the legislation. And he said Congress should pass it by any means necessary.

BIDEN: I support changing the Senate rules whichever way they need to be changed to prevent a minority of senators from blocking action on voting rights.

MARK CALEB SMITH, GUEST: Good morning. How are you?

REICHARD: I'm doing well. Thanks for being here. Let’s start with the election laws that sparked this battle. Those were the laws passed last year by Republicans in Georgia and in Texas. What was it about those laws that upset Democrats? What provisions were most controversial?

SMITH: I would say the Georgia law is probably the most controversial one. And it's certainly the one that I'm the most familiar with. I went to graduate school in Georgia and still keep a pretty close eye on what's going on there politically. A couple of things they attempted to do. One is to use voter ID more extensively so that people at a poll would have to present identification to vote, as opposed to a matching signature technology. They also tried to limit or reduce the amount of absentee voting that could occur. And limit, to some extent, early voting also. There's an awful lot of discussion about the limitation of food and water from being handed out during you know, from from the line of voting. And so those things probably got the most attention and certainly sparked a lot of pushback.

REICHARD: Speaking to the provision about people coming down to the polls to hand out food and water, I was an election judge years ago in another state, and there were strict rules about approaching anyone for any reason within 150 feet of the polling place, so is that really so unusual?

SMITH: Yeah, I think there's an awful lot of misconception about the Georgia law, to be honest with you. And I think your question highlights some of it there for sure. It was trying to get rid of campaigns and candidates and other people coming into a line and handing out food and water in order to attract voters in order to influence voters in a particular way. The law would certainly still allow government officials themselves to distribute water, especially on certain days and certain kinds of weather patterns. But just wouldn't allow other people to do so within a particular distance of a voting place. And so, you know, like everything in our current political culture, the Georgia law sort of got swallowed in the vortex of political polarization where we are. I think some of it got distorted as a result. However, let me say, you know, had the Republicans won Georgia in 2020, had they held onto those Senate seats, I'm not sure they'd have been quite as motivated to enact these laws. Let's be honest about it. I mean, I think they are trying to maybe nibble around some of the margins, perhaps, but certainly no way that comes close to resurrecting the ghosts of Jim Crow.

REICHARD: Republicans argue that Democrats are making over-the-top charges about these new laws in red states, when some provisions in blue states are just as tough or tougher. Do they have a valid point there? How do these laws and their provisions compare to those found in some blue states?

SMITH: Yeah, I think it's a reasonable argument for Republicans to make. You know, talking about early voting. There's a big push to extend early voting so that people can up to 15 days before the election go in to cast a ballot. Well, as of right now, neither Delaware nor New York nor Massachusetts allow that kind of early voting to take place. Those are very deeply blue states and they don't have the kind of provisions that—Georgia would exceed those provisions pretty significantly with their current law they have in place now. And so I mean, if we’re honest about it, there's an awful lot of demagoguery going on here surrounding the issue of voting rights. Fear is a very powerful motivator. And if you can convince people that something is on the line—they're going to lose their right to vote if they don't jump into this election with both feet—then it can certainly be a strong inducement to become active.

REICHARD: Well let’s talk about the national bill that Democrats want to pass. Give us a summary of what’s in that bill.

SMITH: There's an awful lot there, so a summary is all we can do. 735 pages was the last count that I saw. Just a few of the highlights: It would water down voter ID laws pretty significantly. So states that have Voter IDs requirements would now have to accept things like debit cards, utility bills, bank statements, or any other kind of document that has a name attached to it. If a voter didn't have that, they could provide what's called a sworn written statement, where another adult signs an affidavit effectively saying this is the person they claim to be and I'm willing to sign it. Other things that it does is it would have more absentee voting. Every person in America would be getting an absentee ballot under this legislation. It would have drop boxes be widely available. It would require early voting in states up to at least 15 days of early voting to occur. Maybe most significantly, it seeks to limit partisan gerrymandering. And so, as you know and your listeners know, states do an awful lot of redrawing of legislative districts in order to advantage their political party. This bill would try to limit that by forcing states to enter into, you know, a non-partisan commission process for redrawing their boundaries. Those are just some of the highlights. I mean, they deal with felons and former felons. They deal with campaign disclosure and other things like that. But it's a pretty big bill. It's a massive piece of legislation.

REICHARD: Let’s talk foundations now. What are the constitutional guidelines here? With regard to overseeing elections, what powers are specifically granted to states?

SMITH: Yeah, if we look at Article One of the Constitution, in Section Four there's this very clear language that says the time, place, and manner of elections, shall be “prescribed by the legislature thereof.” However, it does also allow for Congress to make exceptions or to alter those regulations as Congress sees fit. So historically, what's developed out of this is the state governments have a lot of latitude to set their own election laws. And generally the federal government has stayed out of it. But through this provision in the Constitution, Congress does have a role to play. And so they can pass federal legislation like the Voting Rights Act, for example, that limits some of what goes on at state governments. So the ideas that we see here being proposed by Democrats don't necessarily conflict with the Constitution. However, it would alter, I think, the historic balance of power when it comes to our campaigns and elections.

REICHARD: Well, as we noted, Democratic leaders want to use the nuclear option to change the rules and overcome a filibuster. But two moderate Democratic Senators oppose that move.

Democrats already used the nuclear option once before, in 2013 to pass President Obama’s judicial nominations. That paved the way for Republicans to use it in turn to confirm President Trump's Supreme Court picks. So many would say it backfired on Democrats.

And while they’re unable to use the nuclear option again, could their loud declarations that it’s time to go nuclear, backfire on them again? Do you think this tells Republicans that when they are in a position to change the Senate rules, they should do it and beat the Democrats to the punch?

SMITH: You know, I think that's kind of if we keep with this rhetoric and keep this line of argument, that's kind of the inevitable outcome we're going to see at some point in the near future. One of the major parties is going to gain enough control over the Senate and get enough votes—at least 50 votes plus the Vice President—in order to alter the rules of the Senate and remove the filibuster when it comes to either legislation in general, or certain kinds of legislation. Harry Reid, when he went through that process to remove the filibuster from judicial nominees, really some nominees, Mitch McConnell was very clear. You know, if you do this, and we're going to strip it away for Supreme Court nominees in the future, and this is the direction it's going to go. And lo and behold, as you said, that's exactly what happened. You know, I'm a political scientist, I don't see things the way that other people might see them. I'm not a partisan politician. You know, but my fear would be this would just create an awful lot of instability in our political system. If that majority of the Senate can simply willy nilly change massive pieces of federal legislation, like campaign law that we see here, when they get control the Senate, even if it's a narrow control, we could be looking at really big standards shifting very quickly every year, every two years, every four years. I'm just not sure that's good for the country when it comes to something as critical, like campaigns and elections.

REICHARD: Mark Caleb Smith from Cedarville University has been our guest. Professor, thanks so much!