In this Oct. 6, 2021, photo, the light in the cupola of the Capitol Dome is illuminated, indicating that work continues in Congress, in Washington. J. Scott Applewhite/Associated Press Photo 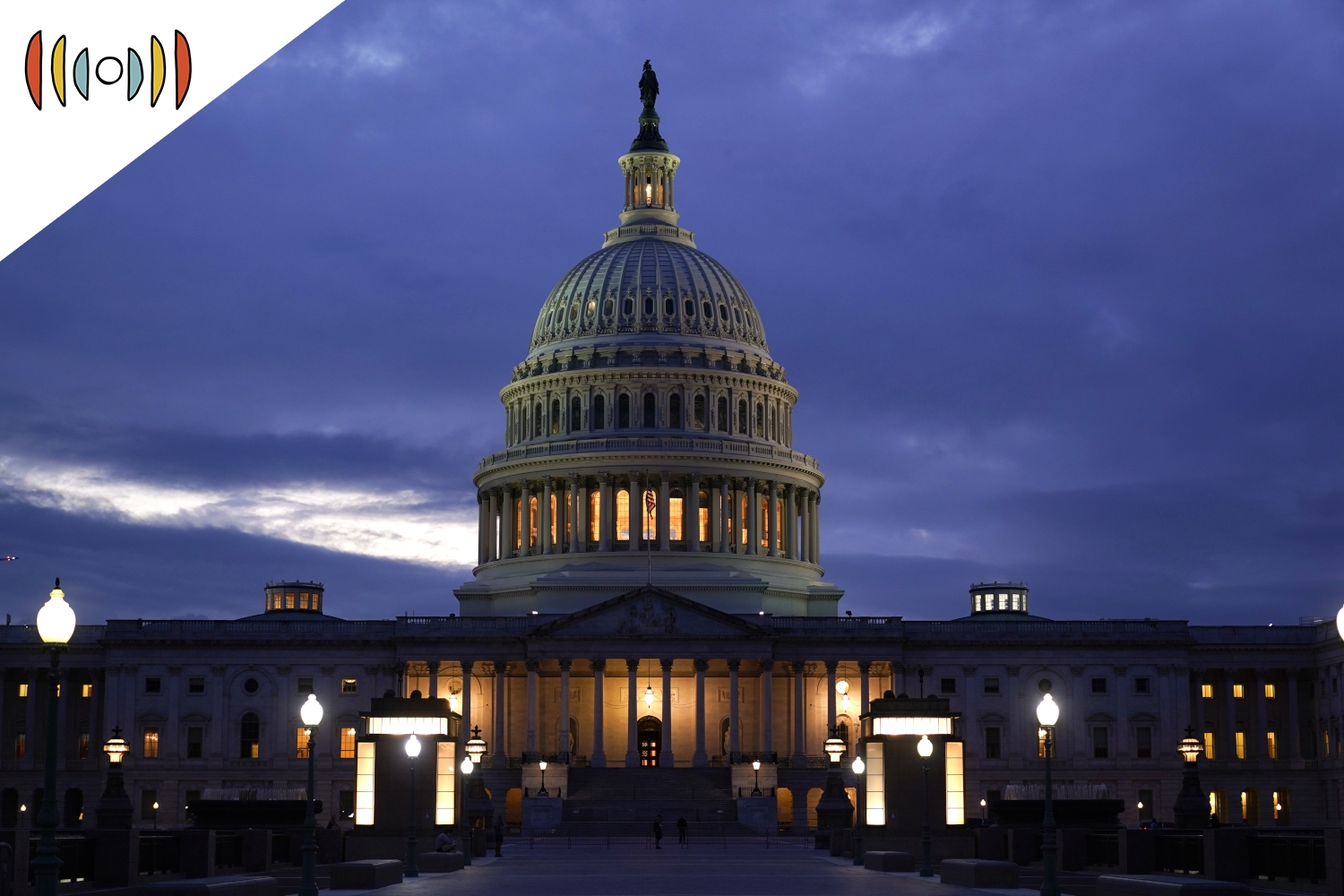 First up: Democrats are plowing ahead with their attempt to pare down President Biden’s massive social spending package—to an amount moderate members of the party can stomach. Despite weeks of pressure from progressives, Senators Joe Manchin and Kyrsten Sinema have held the line on their refusal to pay the $3.5 trillion price tag. Manchin has said $2 trillion is more in line with what’s reasonable. So now, Democrats are trying to figure out where to cut.

BROWN: The first draft of the spending package included expanding programs related to a wide swath of American life—health, education, childcare, and climate change. All are priorities for the Biden administration. Many were part of campaign promises the president and his allies made in 2020. So how will they decide what to keep and what to give up?

Joining us now to break it down—line by line—is Brian Reidl. He is a senior fellow at Manhattan Institute.

BROWN: Ok, so paring down this bill from $3.5 trillion dollars to around $2 trillion seems like it could be pretty hard. But that’s assuming they actually do pare it down. You recently wrote that the bill’s backers may use some political tricks to make the smaller version actually look smaller than it really is. Can you explain what you mean and what that might look like?

REIDL: Sure. Democrats have already done some of this with the current version of the bill. And what they do is they use what's called timing gimmicks to make the bill appear smaller. For instance, the Democrats want to continue the extended child tax credits. That was raised to $3,000 or $3,600 for a child under six last year. They don't want that to expire and have it go back down to $2,000. But it costs $130 billion a year to continue that program. What they're going to do is they're going to have it expire at the end of 2025. Now what the gimmick here is that everybody knows it's not actually going to be allowed to expire. There is no way either a Democratic or Republican Congress at the end of Christmas 2025 is going to take away a popular middle class benefit like the child tax credit once it's already been in place for five years. So everyone knows it's going to continue. But by having it expire in the bill, they don't have to pay for it after 2025. And that lowers the cost of the bill by $750 billion over 10 years. Now that the Democrats need to pare back the bill even further, there is talk that other policies—such as childcare, pre-k, paid leave, expansions of the earned income tax credit—could also have fake expiration dates after just a couple years in order to make the cost appear smaller. Similarly, there's a Medicare dental benefit that Democrats want to create and they would not have that actually be created until the eighth year of the 10 year window so that the 10 year cost looks small, but the permanent cost blows up after 10 years. These are kind of the games that are being played. So ultimately, if you assume that these policies will be extended, the ultimate cost of the policies still could end up being $3.5 trillion to $4 trillion.

BROWN: Is this the kind of financial shell game that could give moderates like Manchin and Sinema some political cover for supporting the measure, even though it might not be substantively different from the original version? In other words, is this going to work, do you think?

BROWN: We hear a lot about Senators Manchin and Sinema. But are they the only ones holding out here?

REIDL: There's kind of a joke in Washington policy circles that Manchin and Sinema, they're not two senators. They're a broad concept. Manchin and Sinema really, in many ways, refer to as many as eight to 10 senators, and many House members who are all uncomfortable with the cost of this package, but a lot of them aren't saying anything because it's a lot easier to let those two senators take all the incoming fire, all the criticism, all the hate mail, all the harassment, all the people following them in the bathrooms yelling at them.We saw this with the minimum wage. Democrats talked about raising the minimum wage to $15. And one or two senators said we aren’t comfortable with this. But then when they actually voted, I believe 12 Democratic senators actually voted no, including about 10 more who had kind of been quiet about their reservations.

BROWN: Democrats have set themselves an Oct. 31st deadline to pass both the social spending package and the infrastructure bill. Do you think they’ll reach a compromise by then? And if not, what do you think might happen?

REIDL: Democrats may reach a compromise by then on the basic outlines of a deal. I think that could happen anytime they sit down at the table and negotiate the outlines of how to get to $1.5 trillion. They're not going to pass the bills by October 31 however, because the bills aren't written yet. And it is an extraordinarily complicated task to write bills that are in the trillions of dollars that cover dozens of different areas of government. The 2017 tax cuts took about 10 months to put together and write. And the Democrats are trying to pass this bill in as little as two months. Not only is there a negotiation delay, but it just takes a long time to actually craft the bills, and then get them scored and ready to pass. I can't see this happening before Thanksgiving. But even then, that would still be pretty fast given the huge magnitude of these bills, and how long it has taken to pass and write other similar bills historically.

BROWN: Any chance the social spending package won’t get passed at all?

REIDL: There's always a chance that the entire house of cards could collapse. Passing bills in Congress this big is very rare and very complicated. That being said, I think that at least something will pass because there is a Democratic consensus for at least a small package of policies. There is a Democratic consensus for extending the child credit, more money for child care, pre-kindergarten, money for paid family leave. That smaller set of policies unites virtually the entire Democratic Party and could even pick up a few Republican votes. Ultimately, Democrats, even if they lose Congress next year, have about 14 months to pass a bill like this and even if they brawl and fight for the next several months on the size of the bill, at some point, it would be inexplicable for them to just not pass the basic low hanging fruit that they all agree with even if it's a smaller package.

BROWN: One last question before we let you go. Democrats had planned to raise taxes to help cover the cost of the original bill. If they cut back the spending, will they also cut back the tax increases?

REIDL: The tax increase portion is a challenge in that, clearly, they're not going to tax more than the spending. In fact, one would assume the taxes will be less than the spending levels. But it's not just a matter of paring back the taxes to match the spending. There's also the bigger issue that Democrats have had trouble actually building support for their tax policies. It turns out that for all the talk about taxing the rich $2-3-4-5 trillion, when you actually design the policies and the rubber meets the road, a lot of these policies are much more complicated, much more damaging, and much less popular than they thought. And even bigger, a lot of them won't raise as much revenue as they thought. So all of a sudden Democrats are going to have a problem even getting to a trillion dollars in taxes. I think ultimately, we're probably going to end up with the corporate tax rate rising from about 21 to 25 percent. The individual top tax rate will probably rise from 37 to 39.6. I think there'll be more money for tax enforcement, maybe a slight increase in capital gains tax rates, but that might be about it. The big overhauls, the creation of brand new tax systems and whole new overhauls of the tax code for upper income individuals has turned out to be much more complex, unpopular, and low revenue raising than they thought.

BROWN: Brian Riedl is a senior fellow with the Manhattan Institute. Thanks so much for joining us today!

REIDL: It's been a pleasure. Thank you.