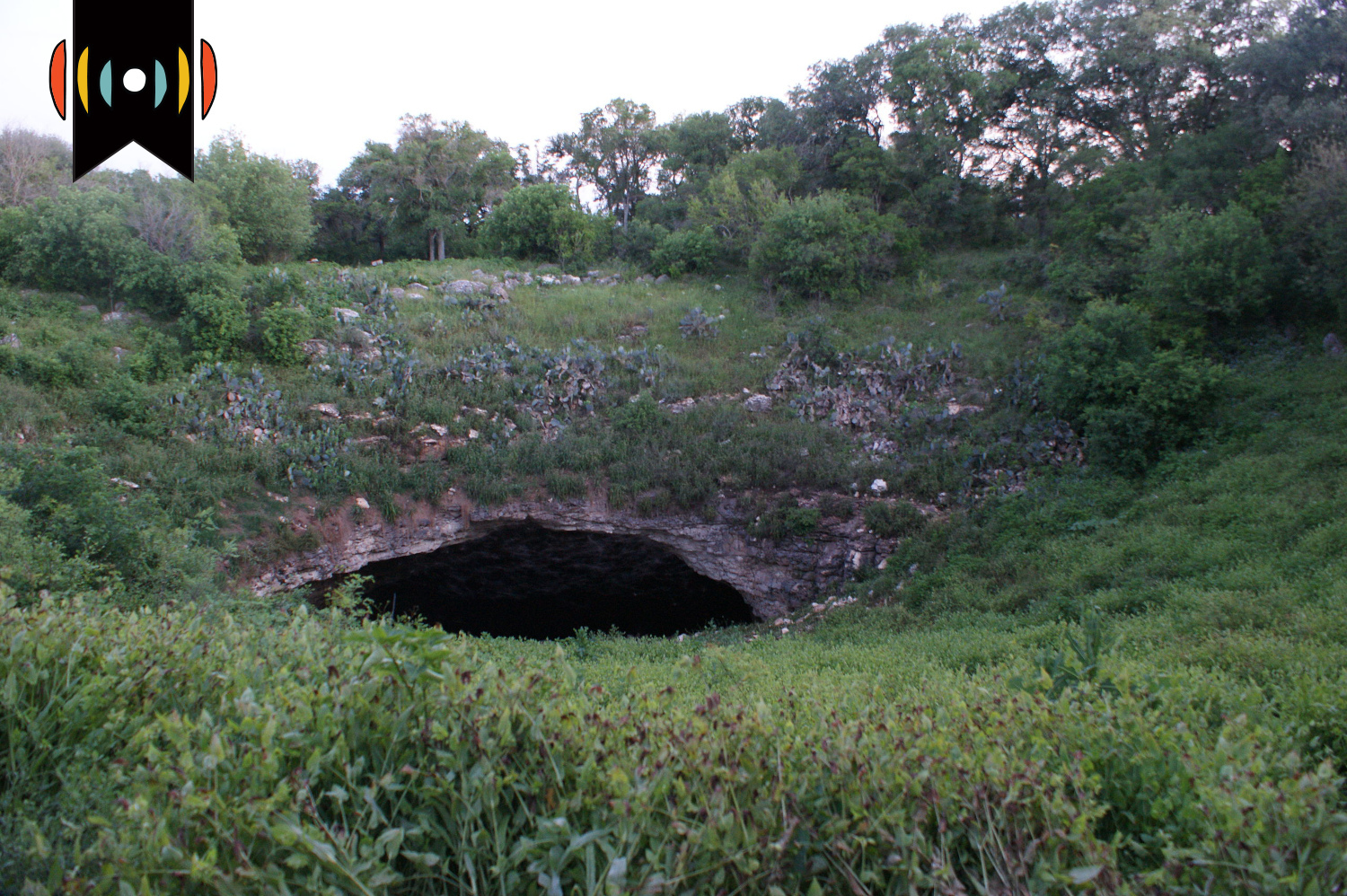 MARY REICHARD, HOST: Today is Thursday, September 15th. This is WORLD Radio and we thank you for listening.

MYRNA BROWN, HOST: And I’m Myrna Brown. Coming next on The World and Everything in It: An unusual group of colonists.

These colonists migrated to Central Texas generations ago. Maybe even thousands of years ago, long before settlers from Mexico or Europe moved in.

REICHARD: Those early colonists lived in relative obscurity. Today, they number in the millions but remain in the shadows. WORLD Reporter Bonnie Pritchett visited their home and has their story.

HUTCHINS: We’re always looking to add acreage to the preserve…

From the dirt parking area, it’s a short walk to the heart of the preserve.

FRAN HUTCHINS: We’re going to go here to the left…Yep. This is what all the hubbubs about…

The ground suddenly falls away into a dark gaping maw. Prickly pear cactus, yaupon hollies, and scrub grass cling to the sharply sloping ground as if to keep from sliding into the abyss.

HUTCHINS: The mouth of the cave is at the bottom of the sinkhole, which is about 80 feet deep.

Because of its limestone terrain, Central Texas is pocked with caves. Some are open for public tours. Not this one. It’s occupied.

Still, the preserve hosts private visits to Bracken Cave on summer evenings. Guests sit on simple wooden benches and stare into the cave’s blackness. And they wait.

Hutchins spots the evening’s first flutters at the cave’s mouth.

HUTCHINS: You can see the bats on the right-hand side. So, they're starting to move out. So, they’ll be out any minute… 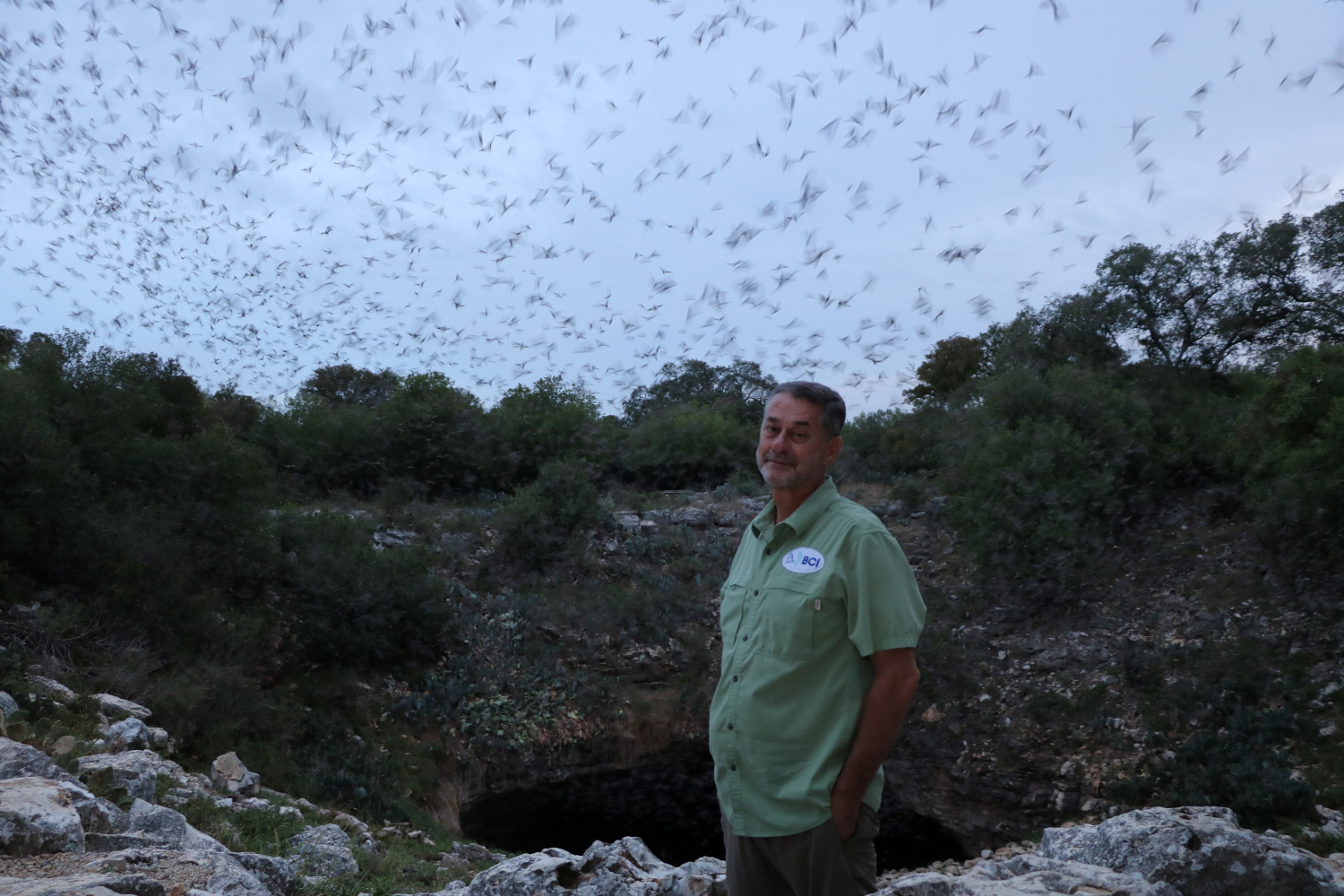 Fran Hutchins, director of Bracken Cave Nature Preserve and some of the 20 million bats that call the cave home Photo by Bonnie Pritchett

Bracken Cave is home to the largest colony of bats in the world.

HUTCHINS: So, we’re looking at 20 million Mexican Freetail Bats calling this cave home…The bats are roosting all over the walls and the ceiling. You're looking at around 500 bats per square foot…

The Mexican Freetail Bat is small - only weighing as much as two 25-cent pieces. Hutchins placed his thumbs together and fanned out his hands to illustrate the bat’s shape.

HUTCHINS: But their body size is about as big as my two thumbs together with a 10-inch wingspan…They look a lot bigger when they're flying. And they're gonna go out at least 60 miles from here one way…

The bats are heading to farms and orchards where they’ll consume 150 tons of bugs in one night. That’s about the same weight as 20 school buses.

HUTCHINS: But these guys are targeting our agricultural pest, which is why they're such beneficial to us… 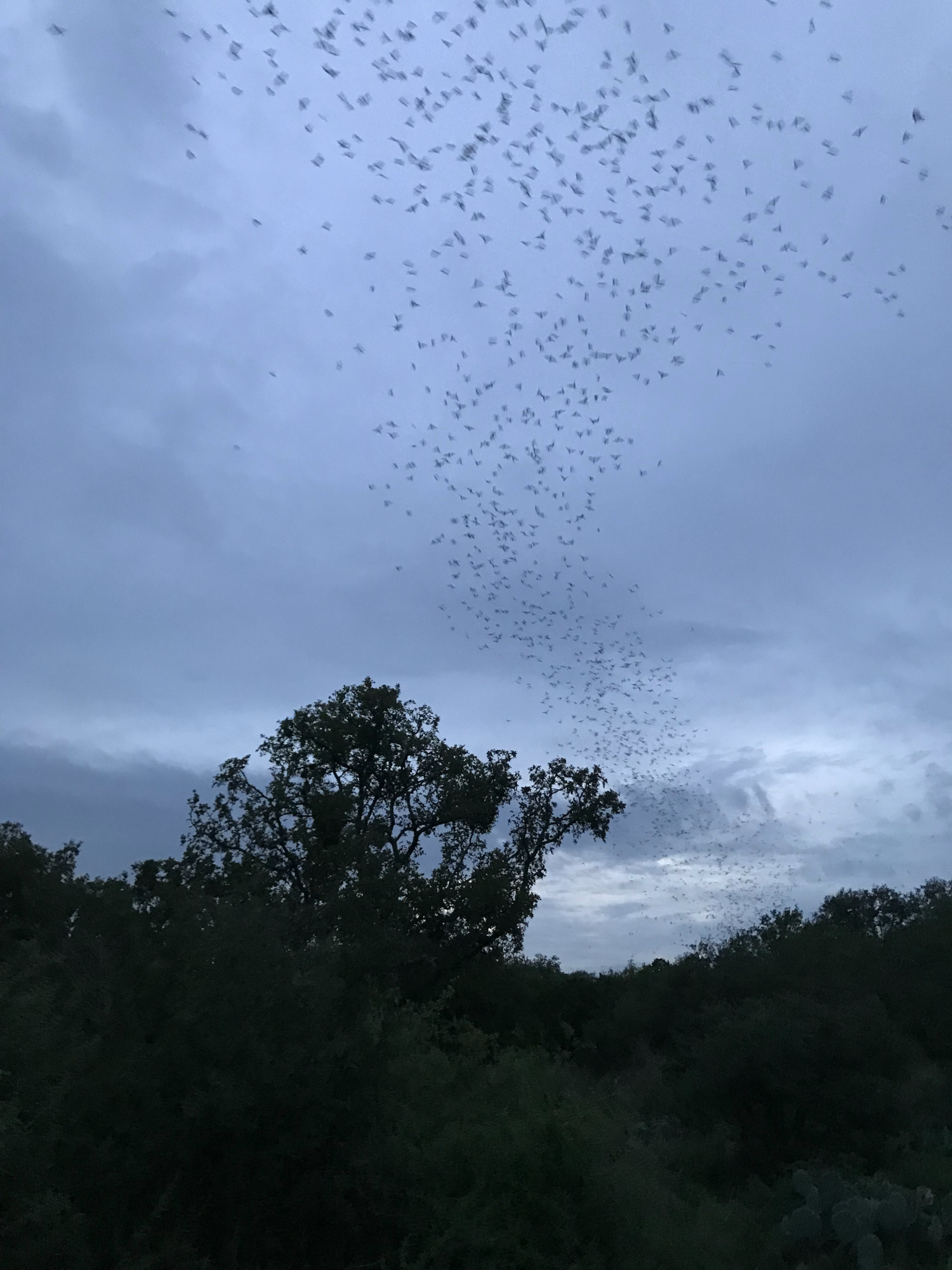 Getting people to appreciate the role bats play in the environment is part of Hutchins’ work. Bracken Cave Preserve is part of Bat Conservation International, an organization dedicated to protecting endangered bats.

HUTCHINS: One of the biggest effects worldwide, not just in Texas, but worldwide on bats is loss of habitat…and if we can protect the habitats for these bats all the other wildlife in that area is going to benefit as well…

Watching 20 million bats emerge from their roost is quite a show.

From a distance, they look like smoke. On a weather radar the bats billow into a 20-mile-radius cloud. Planes flying into the San Antonio airport give it a wide berth.

The bats begin emerging at dusk.

HUTCHINS: This is the beginning of the batnado…

HUTCHINS: The vortex literally starts in the back of the cave. So, because this is 1000s of smaller colonies, and we know how hard it is to get like our family from the front door of the house into the minivan…But imagine if there's like 100,000 in your family unit. So, when they drop off the ceiling and start flying around that vortex that, that pattern, allows everybody to get together in the vortex. And then when they then the vortex moves from the back of the cave, out into the front room, to the mouth of the cave and then out into the bowl of the sink hole…

The multitude of wings in flight sounds like rain. When they’re about 15 feet directly overhead, you can hear the beat of individual wings.

Once the vortex clears the treetops about 100 feet up, the bats peel off and become black rivers flowing through the deepening blue twilight sky.

The maelstrom will continue for 3 and a half hours.

For Hutchins, it never gets old.

HUTCHINS: To sit here and watch and see 10s of 1000s of one species of animal doing its thing that we benefit from. They're going to come out, and they're going to eat over 150 tons of bugs tonight, whether we're here or not…For a lot of people makes that connection with, “Hey, you know, this probably needs to be protected. We don't want to lose this.”