Japan's Naomi Osaka reacts after lighting the cauldron during the opening ceremony in the Olympic Stadium at the 2020 Summer Olympics, Friday, July 23, 2021, in Tokyo, Japan Ashley Landis/Associated Press Photo 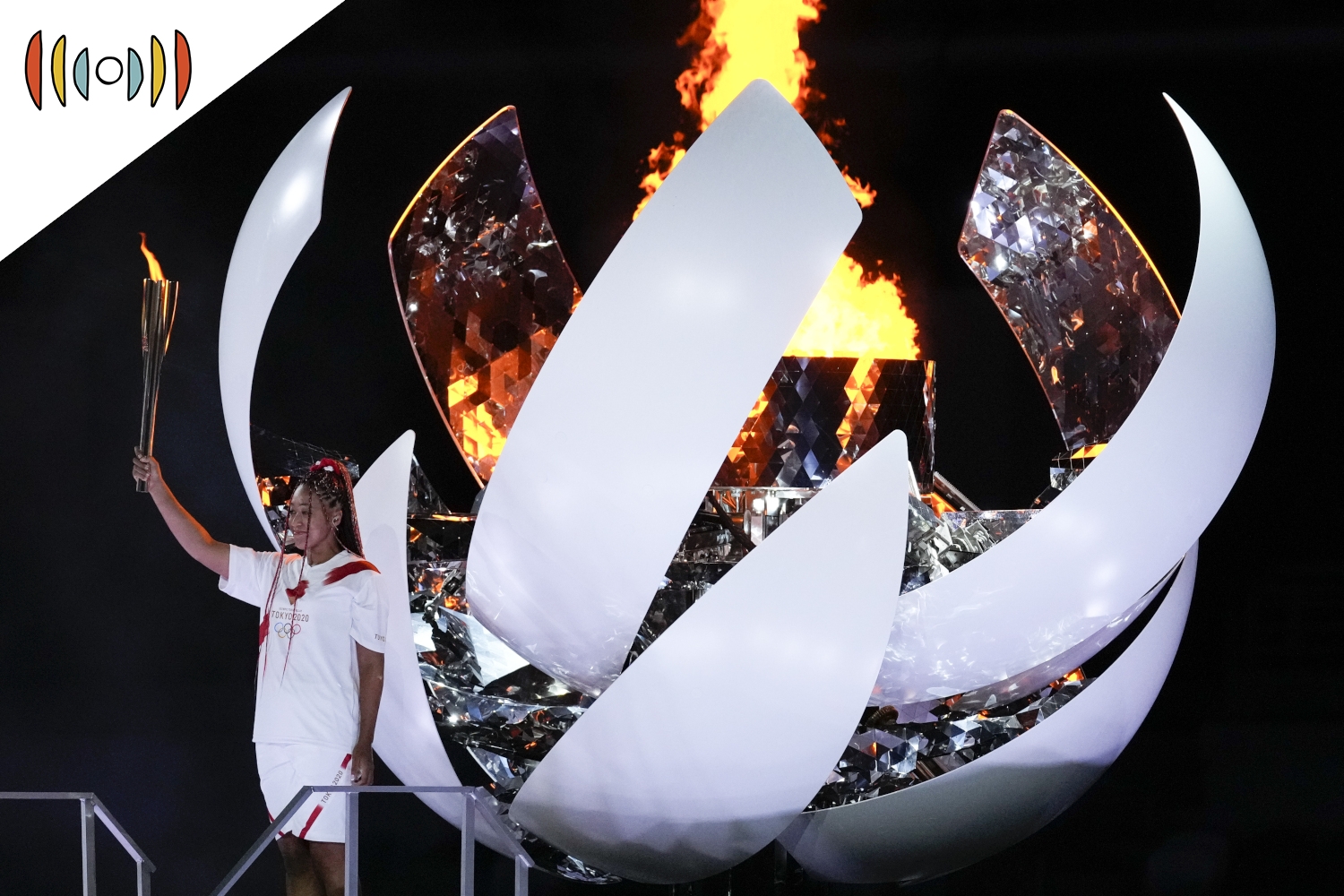 You’re listening to WORLD Radio. We’re happy to have you along with us today.

PAUL BUTLER, HOST: And I’m Paul Butler. Coming next on The World and Everything in It: the Summer Olympics.

Every four years, thousands of athletes from dozens of countries come together and compete.

In 1964, Japan hosted its first Olympics:

NEWSREEL: OLYMPIC GAMES COVERAGE “Tokyo is dressed in her holiday best for the opening of the 18th modern Olympics...

AUDIO: NEWS COVERAGE OF OLYMPIC GAMES IN TOKYO “And the 32nd Summer Olympics are officially underway in Tokyo tonight...

The games were supposed to happen in 2020. But like so many other events, it was postponed. Earlier this year, things were looking pretty good for the now 2021 Summer Olympics. But then, the Delta variant showed up. To prevent another delay, the Japanese Olympic Committee put in place strict COVID protocols, mask mandates, and even prohibited fans from attending the events.

BUTLER: Even so, officials warned they might have to stop the competition—but last Friday, the games opened as planned.

BUTLER: As the opening ceremony began, there was a collective sigh of relief that the Olympic Summer games were finally underway. The pageantry was as grandiose as ever.

As usual, the final leg of the flame relay through the Olympic Stadium was an emotional one. Torch bearers included a former New York Yankee and Japanese baseball legend, a pandemic doctor and nurse, and children representing survivors of the 2011 earthquake and tsunami that killed nearly 18-thousand people.

The final torch bearer was Japanese tennis star Naomi Osaka. She slowly mounted the imposing staircase of the Mount Fuji shaped cauldron to ignite the Olympic Flame. Then pyrotechnics lit up the entire rim of the stadium. For a moment, the whole venue appeared to be aflame.

But one of the most memorable moments of the ceremony came in an aerial display by 1,800 lighted drones flying over the stadium. They began in the shape of the Tokyo Olympic logo, and morphed into a three dimensional spinning globe.

NBC reported that 17 million Americans watched the ceremony, down 36 percent from the last Olympics. However, 70 million Japanese viewers caught the event online or on broadcast TV.

A week into the competition, the top five medal earners by country include Japan, the United States, China, Great Britain, and the Russian Olympic Committee—or ROC. Russia was banned from international competition two years ago after a doping scandal during the 2016 Olympics. So athletes from Russia can unofficially represent their country under the Olympic flag.

As with every Olympics, there’s always an underdog that beats the odds and defeats the worlds’ best. This year is no exception as a couple of unknowns shocked both the men’s swimming and women’s bicycling fields with unexpected winning performances.

There have also been a few surprising losses and withdrawals. The U.S. women’s soccer team lost their first game 3-0 to Sweden. They’re not out of contention, but the pressure is on. U.S. gymnast Simone Biles—who many thought would dominate—is out with a medical issue. Japan’s tennis great Naomi Osaka was eliminated in the third round. And China’s seemingly unbeatable mixed table tennis team lost to Japan.

Each Olympics, the IOC introduces new sports to the games. This year athletes are demonstrating Kite Foil Racing ahead of the 2024 Summer games in Paris where it will be a medaling sport.

ACKERMAN: So it's a lot of fun to see some of these new sports get some new athletes involved in the Olympics.

Jon Ackerman is the managing editor at Sports Spectrum. He’s no stranger to the Olympics: He covered the Athens, Beijing, and London Games for NBC before coming to Sports Spectrum four years ago.

ACKERMAN: These new sports aren't always guaranteed to have another run in the Olympics. And so the athletes who get to compete in these new sports, really want to give it their best...

He says it’s been fun watching the new sports as they bring a very different kind of athlete to the games:

ACKERMAN: What's cool about skateboarding is...two of the medalists from the other day, we're 13 years old. So we have some young teenagers that are able to compete in the Olympics.

Though Ackerman acknowledges the decision to introduce new sports is primarily a marketing strategy.

The competition is often exciting. And the athleticism on display these two and a half weeks is remarkable. But for Jon Ackerman, what keeps him watching is more than “the thrill of victory and the agony of defeat.”

ACKERMAN: Well, it's a lot of fun to find these athletes who are unashamed about their faith in Christ and want to share about it. Because athletes do have a unique platform that many people don't have...

In his role at Sports Spectrum, Ackerman gets to meet a lot of Christian athletes. And he’s closely following two at the Tokyo Olympics.

ACKERMAN: One that comes to mind is Kyle Snyder, he's an Olympic wrestler for the US. He won the gold medal five years ago in Rio. And a few years ago, Kyle Snyder lost to this Russian wrestler and somebody asked him. How will this loss define you? And he's said, without hesitation, wins or losses don't define me. What defines me is my identity in Jesus.

The other stand out is 400-meter hurdler Sydney Mclaughlin.

AKERMAN: At the Olympic Trials last month, she set the world record and she is 21 years old and within minutes of setting that new world record in the 400 meter hurdles. She was praising God, she was being interviewed by NBC and other media members. And she's like, the biggest difference for me this year has just been my faith in God and my trust in God. And I can do nothing but but praise him right now. So it's a lot of fun to see athletes like that when they're competing when they're among the best athletes in the world. And they're praising God the whole lot the whole way.