Ukrainian soldiers on an armored personnel carrier pass by people carrying their belongings as they flee the conflict, in the Vyshgorod region close to Kyiv, Ukraine, Thursday, March 10, 2022. Efrem Lukatsky/Associated Press Photo 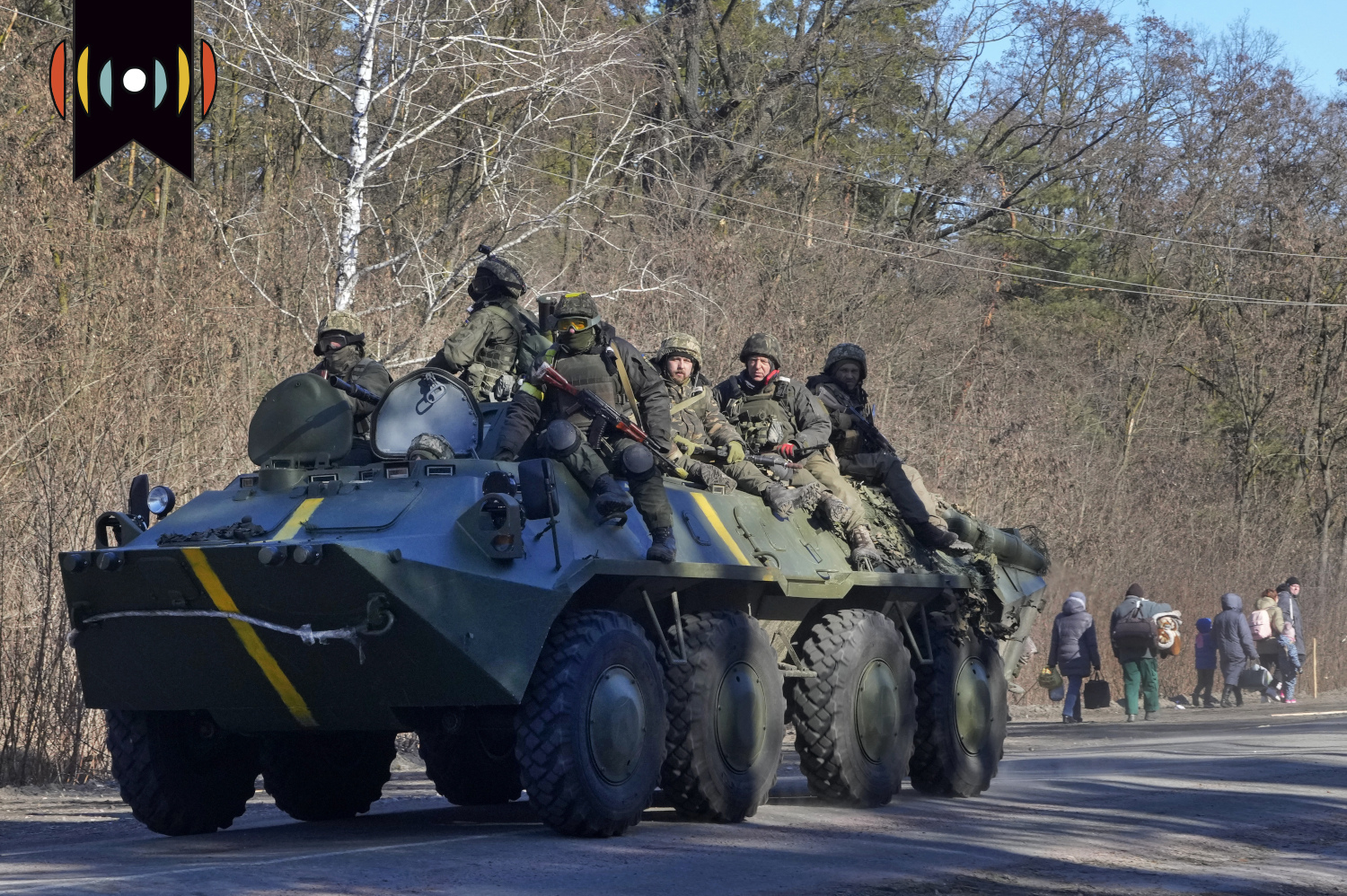 The Russian invasion is now in its fourth week, and nearly three million people have fled the country. Russian shelling has leveled cities and killed nearly 700 civilians.

Now, it appears that Russian troops are regrouping and preparing to make a run for the capital. WORLD’s Jill Nelson reports on how Ukrainians are preparing to protect their prized city.

MAGDYCH: So that’s how Kyiv looks these days. There is some traffic on the roads because not everybody has left Kyiv. A lot of people stayed.

JILL NELSON, CORRESPONDENT: Oleg Magdych is a 44-year-old pastor who has been in ministry for more than 25 years. Now he spends his days training young soldiers and preparing Kyiv for a Russian invasion.

Earlier this week, he went to pick up five sets of steel plates for bulletproof vests. Somehow, he is able to drive and take video of road blocks he encounters as he weaves his truck to the right and to the left.

MAGDYCH: There’s a lot of roadblocks like this with anti-tank constructions, and at some road blocks there are checkpoints where you have to stop and they will search your car and check your documents.

Military analysts believe Russian troops are regrouping and waiting for deliveries of fuel and ammunition. Magdych says Russian forces fire missiles daily, and they are expecting a full assault on the capital.

MAGDYCH: When it's done, they're going to strike. They're going to try to break through the defense line on the northern side of Kyiv. So we're getting ready for that and we're trying to cut the supply chain for them.

Russian forces in the past few weeks pummeled cities on the outskirts of Kyiv. They tried to break through defenses in the northeast suburb of Brovary and the northwest city of Irpin—a hub for Christian ministries.

Verified reports of Russian troops targeting and killing women and children fleeing these towns have angered the international community.

It has also emboldened the Ukrainian resistance. Magdych says the people who have stayed in Kyiv are creating their own barricades made out of sand and cement blocks. And Magdych says they are prepared to destroy all eight bridges straddling the Dnieper river if Russian troops try to cross.

MAGDYCH: So this is one of the bridges that is closed to the public, and you can only cross it if you are military personnel or some kind of special force. The bridge is empty and it’s ready to be destroyed if the enemy comes close to the bridge.

Ukrainian forces already destroyed the bridge between Irpin and Kyiv.

Oleg Vasilevsky operates Christian camps for children in Ukraine and a distant learning school. He says so many Ukrainians have joined the territorial defense that it takes days to get accepted into a unit.

VASILEVSKY: So my former staff have joined territorial defense, and it's civilians who help the army. So all of a sudden, the Russian Army is against hundreds of thousands of Ukrainians, not just our army.

His 26-year old son joined the Kyiv unit, and Vasilevsky is worried that he could be a target for Russian saboteurs who began infiltrating the city in December.

Some military analysts say Ukraine’s unconventional tactics and sheer grit have caught the Russian military off guard. And Ukrainians have the home court advantage.

Ben Hodges is a former commanding general of the U.S. Army forces in Europe and now works with the Center for European Policy Analysis. He recently met Ukrainian President Volodymyr Zelensky, and he doesn’t think Russia troops will be able to conquer the capital.

HODGES: I say it is extremely unlikely they can do this. They don't have enough people, Kyiv is a massive city. I was there five weeks ago; It's very complex, urban terrain. Now that doesn't mean they can't sit back and launch missiles into it like they're trying right now.

Hodges says the next week of this war will be decisive, and the West should give Ukraine as much military assistance as possible.

Oleg Magdych says Kyiv is the most protected city in Ukraine, but he has two big concerns:

MAGDYCH: We can beat them on the ground, but we can't take all the rockets they're launching.

Ukrainian forces in Kyiv shot down several Russian helicopters. And they’ve prevented a miles-long armored column from entering the capital. But a barrage of missiles would spike the death toll and could damage historical buildings, like the thousand-year old Saint Sophia Cathedral.

Magdych is also concerned about the 80 men in his unit, should Russian troops storm the city. Around 30 have combat training, but only 10 have been in active combat.

MAGDYCH: Very soon I have to make a decision: Who do we send to the front lines? Most of them are not ready yet, but all of them would go.

The day after we spoke he sent a video clip of his young men preparing their weapons.

MAGDYCH: Here I am watching my guys spending every single minute they have cleaning their weapons. They have to be ready in a combat situation when bullets are going to be flying over their heads so they have to do it with their eyes closed.

Magadych knows they could soon be facing life or death situations, and he leads his men in prayer each morning and evening.

And he adds this prayer request:

MAGDYCH: Please pray with me for every civilian, every soldier to just stay alive. Or if they have to die, I want them to die knowing Jesus. That’s my prayer.