Police investigate at the scene of a crash involving multiple people and injuries at a holiday parade in Waukesha, Wis., on Sunday, Nov. 21, 2021. Mike De Sisti/Milwaukee Journal-Sentinel via Associated Press 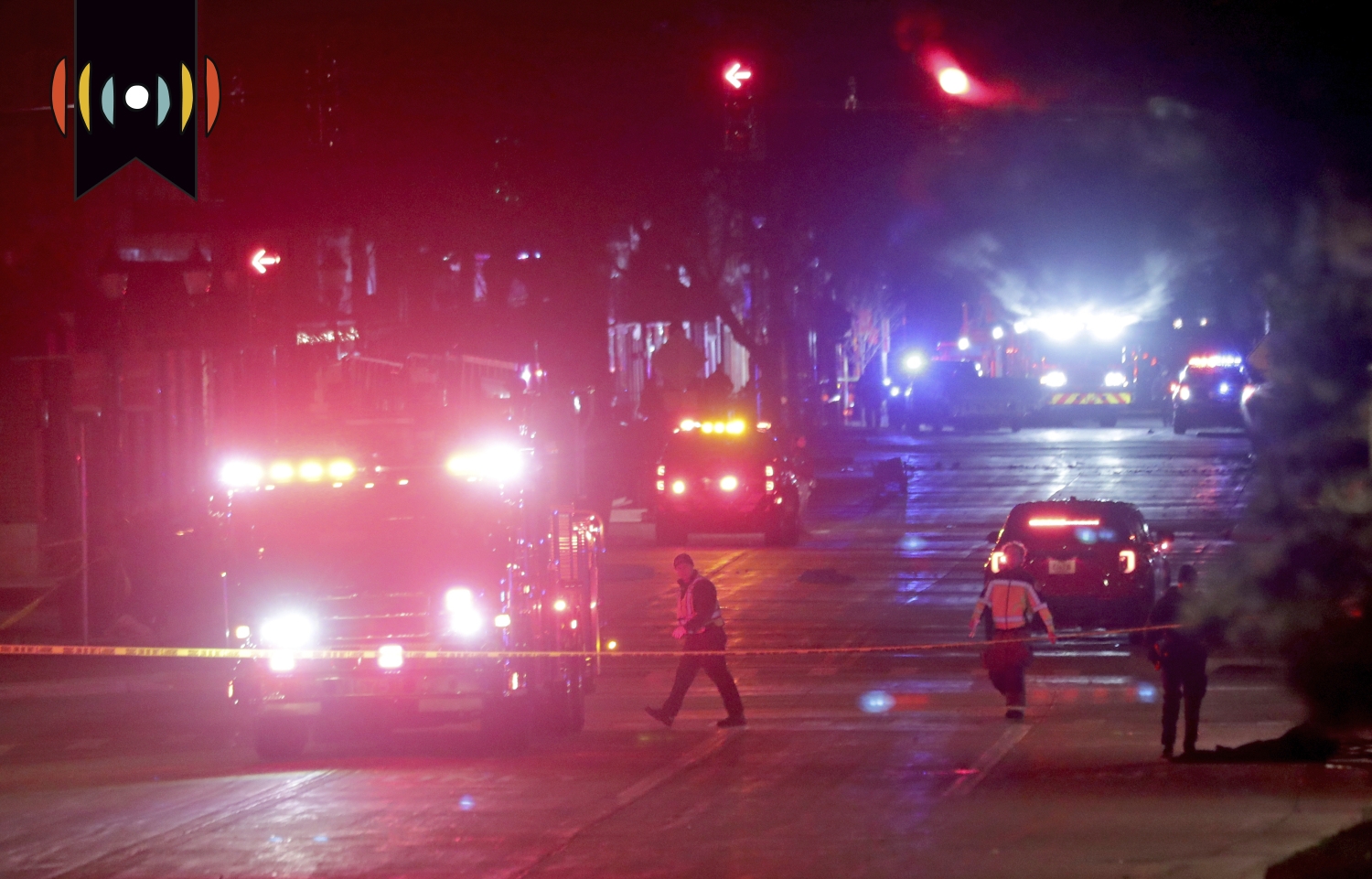 Waukesha parade suspect has long rap sheet, no evidence of terrorism » Police in Waukesha, Wisconsin say the man who allegedly drove his speeding SUV into a Christmas parade on Sunday had a long rap sheet and was leaving the scene of a domestic dispute.

THOMPSON: [Suspect] was taken into custody a short distance from the scene and we are confident he acted alone. There is no evidence that this is a terrorist incident.

The suspect is 39-year-old Darrell Brooks Jr. He has been charged with crimes 16 times since 1999 and had two outstanding cases against him at the time of the parade disaster. In one of those cases, he was accused of deliberately running down a woman with his vehicle.

At least five people died after being struck by the SUV. Thompson said Brooks will now face five charges of intentional homicide.

Thomas Kluka was at the parade with his 14-year-old daughter when the red SUV sped into the parade route.

KLUKA: When I noticed the car coming, I stood up and said ‘on no!’ And then my daughter stood up and I pushed her aside to the right, and then I just basically yelled get out of the way.

Officials said four women died in the incident, ages 52 to 79, and one 81-year-old man.

Another 48 people were injured, including two children who were in critical condition as of Monday night.

The president on Monday said Jerome Powell, who often goes by “Jay”, was a steady hand through a brutal pandemic recession.

BIDEN: When our country was hemorrhaging jobs last year and there was panic in our financial markets, Jay’s steady and decisive leadership helped to stabilize markets and put our economy on track to a robust recovery.

Many progressives preferred Lael Brainard for the job. She is the lone Democrat on the Fed’s Board of Governors. Biden said he would nominate her as vice chair.

Progressives complained that under Powell, the Fed has weakened bank regulation and has been slow to take account of climate change in its supervision of banks.

In a second term that begins in February, Powell would face a difficult task of trying to rein in inflation without denting job growth.

October existing home sales hit fastest pace since January » Sales of previously occupied U.S. homes ticked higher in October, marking their strongest annual pace since January. That was in spite of the fact that fewer available homes on the market pushed prices higher.

Existing homes sales rose 0.8 percent last month from September. That came out to a seasonally-adjusted annual rate of 6.34 million units. That was stronger than expected.

But it offered some new details on other matters, namely, Cuomo’s $5 million private book deal.

Cuomo had promised state ethics officials that no state resources would be used on the book. But the report outlined evidence that the governor ordered his staff to spend a great deal of time on the project.

After 10 years in office, the Democratic governor resigned in August of this year under the weight of mounting allegations.

DUNIKOSKI: All three of these defendants made assumptions, made assumptions about what was going on that day, and they made their decision to attack Ahmaud Arbery because he was a black man running down the street.

In February of last year, father and son Greg and Travis McMichael grabbed guns and pursued Arbery in a pickup truck after spotting him running in their neighborhood. A neighbor, William “Roddie” Bryan, joined the chase and recorded the video of Travis McMichael opening fire as Arbery threw punches and grabbed for his shotgun.

Dunikoski said the defendants cannot claim self-defense, because they attacked Arbery. And she said it was the 25-year-old Arbery who was trying to defend himself.

But defense attorney Jason Sheffield argued that the men engaged Arbery not because he was black, but because they had reason to suspect he was a burglar.

SHEFFIELD: They told you that what was happening in their neighborhood scared them. It caused them concern.

The defense argued that the defendants only opened fire when Arbery violently resisted a legal effort to detain him until police arrived.

All three men face counts of murder and other charges.

No one was charged in Arbery’s death until a video of the incident leaked online two months later and the Georgia Bureau of Investigation took over the case from local police.