Command handover in Afghanistan, protests in Cuba, Biden addresses crime surge in U.S. cities, and an arrest in Haiti 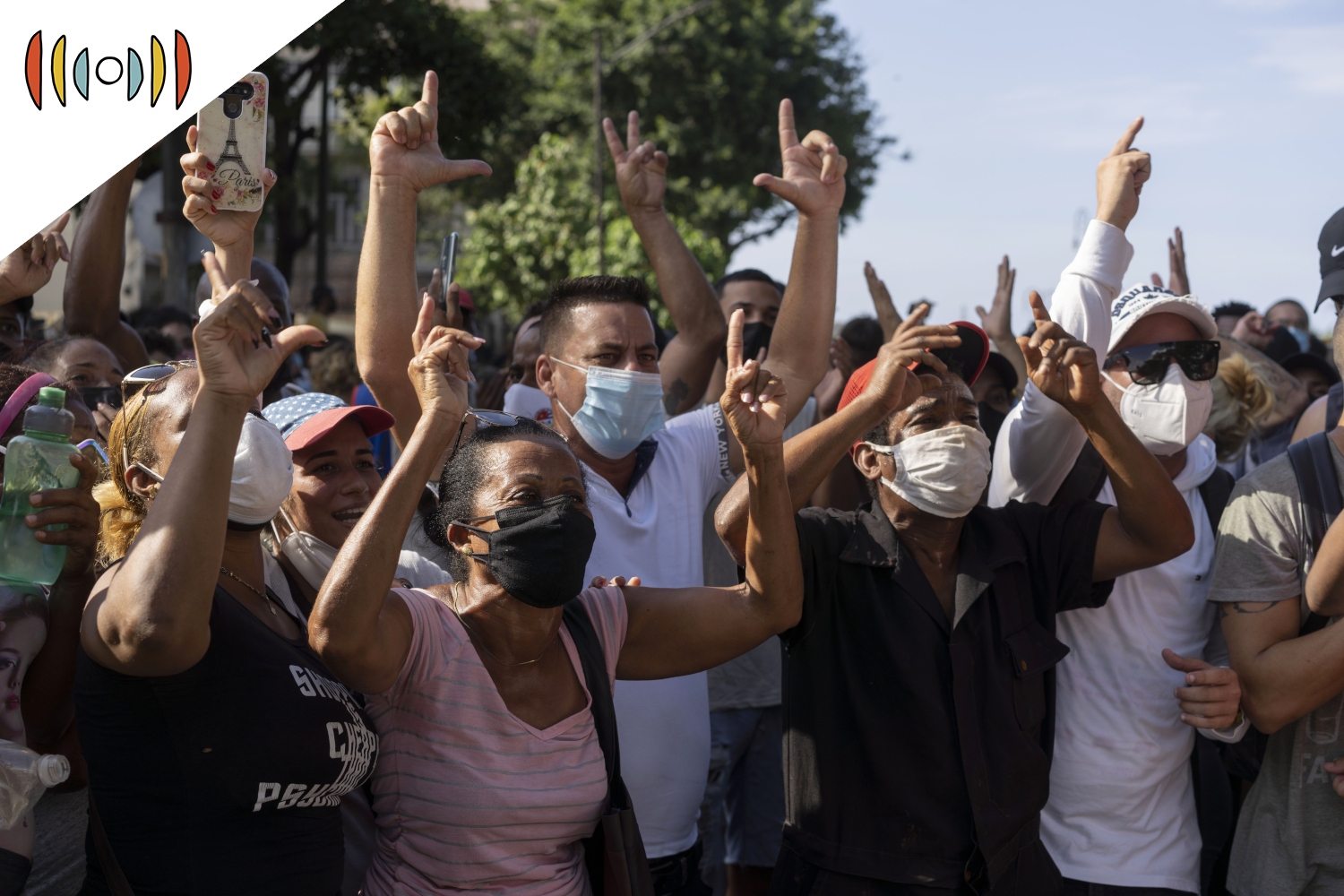 Gen. Scott Miller handed off the command to Marine Gen. Frank McKenzie, who said Monday’s ceremony marked—quote—“an important milestone in the transition of our involvement in Afghanistan.”

MCKENZIE: But it’s not the end of the story. It’s rather the end of a chapter. More chapters will be written and the narrative will continue. What it does signify—the ceremony today signifies—is our renewed commitment to our Afghan partners.

He will have authority to conduct possible airstrikes in defense of Afghan government forces at least until the U.S. completes its withdrawal next month.

The handover ceremony came as the Taliban continues to conquer more territory throughout the country.

Afghanistan’s National Security Adviser Hamdullah Mohib said the U.S. and NATO withdrawal has left a vacuum. As a result, he said, already Afghan forces have been left stranded on the battlefield without supplies, sometimes running out of food and ammunition.

Biden voices support for Cuban protesters » President Biden said Monday that the United States stands with Cuban protesters who have taken to the streets, demanding changes from Cuba’s communist regime.

BIDEN: The Cuban people are demanding their freedom from an authoritarian regime. And I don’t think we’ve seen anything like this protest in a long, long time.

Thousands in dozens of cities are publicly protesting food shortages and high prices amid the pandemic. It’s one of the island's biggest antigovernment demonstrations in recent memory.

Cuban dictator Miguel Diaz-Canel said the United States is fomenting unrest. He blamed the protests on what he called a deceptive social media campaign.

CANEL (translated): In the last couple of weeks, a social media campaign against the Cuban Revolution increased, setting out the root source of the problem around issues and shortages we are facing because that’s the way it’s created to try and create dissent, dissatisfaction.

Citing that supposed campaign, the Cuban government has blocked social media sites within the country.

Biden hosts White House meeting on crime reduction » President Biden hosted city and law enforcement leaders from around the country at the White House on Monday to talk about surging crime rates and what to do about it. The president told reporters:

BIDEN: While there’s no one-size-fits-all approach, we know there are some things that work. And the first of those that works is stemming the flow of firearms used to commit violent crimes.

Shootings and killings are up around the nation, with local politicians and police struggling to manage the violence.

The president recently announced a slate of proposals to address the problem, including plans to provide funding to cities that need more police. But many of the proposed measures are little more than suggestions to local governments.

PSAKI: Certainly the safety and security of the people of Haiti is of great interest to the president and to the administration.

A 7-member team of U.S. security officials returned home from Haiti on Monday after a short visit. They met with top government leaders in Haiti and reviewed the security of critical infrastructure there.

BIDEN: People Haiti deserve peace and security and Haiti’s political leaders need to come together for the good of their country.

The White House suggested that Haiti's political uncertainty was a complicating factor in determining whether to grant the government’s request for U.S. troops.

Meantime, Hatian authorities have arrested a Haitian businessman living in Florida in connection with Moise’s assassination. They identified the suspect as 62-year-old Christian Emmanuel Sanon, who once expressed a desire to lead his country in a YouTube video.

Authorities also suspect dozens of former Colombian soldiers in the killing. Twenty-three of them are in custody, along with three Haitians.

BURKETT: The search continues until everyone trapped in the debris is pulled out.

Burkett said officials have decided to increase security around the debris pile to help ensure that possessions are returned to their rightful owners.

Workers have recovered everything from jewelry to several paintings.

Police said there has been “no criminality” at the site, but officials want to make sure the area is secure.