Emilia Emig, of the North Side, clears snow from her car, Monday, Jan. 17, 2022, on the North Side neighborhood of Pittsburgh, Pa. Alexandra Wimley/Pittsburgh Post-Gazette via Associated Press 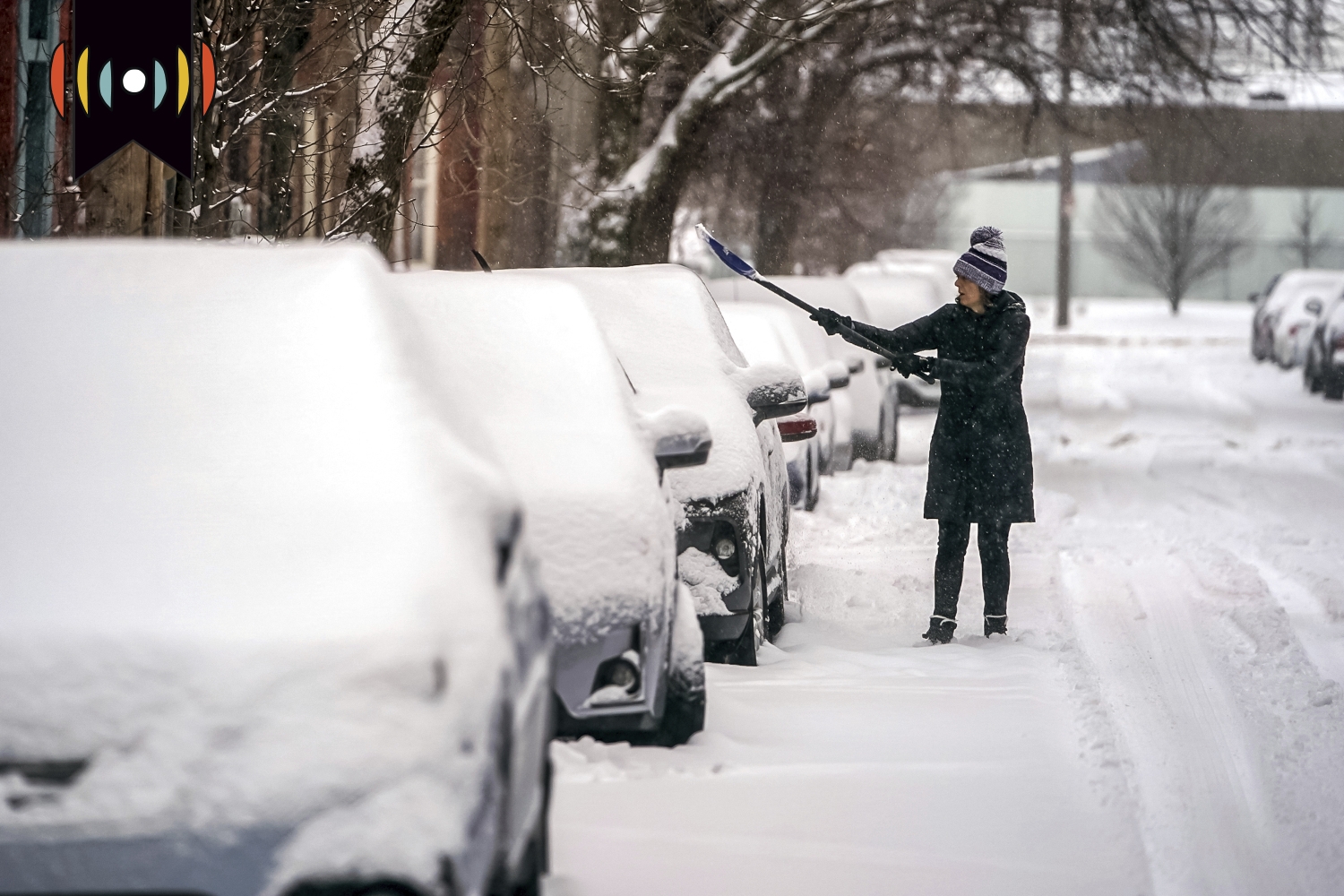 Lots of fun for the kids! Not so much for those who had drive on the frosty pavement.

A pickup truck heard there, skidding across a North Carolina road.

The winter weather snarled traffic and cancelled thousands of flights once again over the past few days.

More than 50 million people across the eastern United States were under winter weather alerts yesterday.

Many businesses closed their doors, but others soldiered on. Amanda Yarber manages Dolly’s Diner in Princeton, West Virginia.

YARBER: The owner here, he has a 4-wheel-drive and a snow plow and all that, so if anybody ever needs a ride, he’ll come pick us up.

While snow turned into rain and slush by midday, temperatures plummeted in some places last night, making many roads treacherous again this morning.

Virginia State Police responded to nearly 1,000 car crashes and stranded vehicles on Sunday alone. And two drivers died in North Carolina when a car slid off the road and into a tree.

Rabbi describes gunman’s “terrifying” siege of Texas synagogue » The rabbi of a Texas synagogue where a gunman took hostages during a Saturday service is revealing new details about the incident.

WALKER: It was terrifying. It was overwhelming, and we’re still processing.

Rabbi Charlie Cytron-Walker told “CBS Mornings” that he let the gunman inside the synagogue in suburban Fort Worth because he appeared to need shelter.

WALKER: When I took him in, I stayed with him. Making tea was an opportunity for me to talk with him, and in that moment, I didn’t hear anything suspicious.

But a short time later, he heard a gun click behind him.

The rabbi said he eventually threw a chair at his captor before escaping with two others after an hours-long standoff.

During the standoff, Akram repeatedly demanded the release of a federal prisoner convicted for trying to kill U.S. Army officers in Afghanistan.

The investigation stretched to England, where police in Manchester announced that they had arrested two teenagers in connection with the standoff. Authorities are holding them for questioning.

The missiles launched four minutes apart and reportedly flew more than 200 miles before crashing into the waves off the country’s northern coast.

U.S. military officials say the missiles did not pose an immediate threat to U.S. personnel or territory, or to its allies.

But it does show once again that Pyongyang is opting to flex its military muscles rather than return to the bargaining table to resume nuclear talks.

SOLTVEDT: It’s a very complicated regional picture at the moment. It’s also likely that suspicion is going to fall on Iraq-based groups, who have recently made threats to carry out attacks against the UAE.

The UAE has supported Yemen throughout a six-year civil war with Iran-backed Houthi rebels. Recently, Houthi troops have suffered major losses as Yemeni troops pushed them back, thwarting their goal of controlling the northern half of Yemen.

Houthi rebels have used drones to attack Saudi Arabia and the UAE in the past.

China birth rate falls for 5th straight year to record low » The number of babies born in China fell again last year. And some analysts say the country is facing a demographic time bomb. WORLD’s Josh Schumacher has that story.

JOSH SCHUMACHER, REPORTER: The Chinese government reported Monday that about 10.6 million babies were born last year, down from about 12 million in 2020. It’s the country’s lowest birth rate on record, and it marked the fifth straight year that the birth rate has fallen.

The Chinese government has enforced birth limits since 1980 to restrain population growth and conserve resources. But that strategy is now backfiring.

Authorities eased birth limits starting in 2015, but couples are put off by high costs, cramped housing, and job discrimination against mothers.

The economic output per person in China is already below the global average. And many analysts warn that with the fall in population growth, China may be facing a demographic time bomb. The country may eventually have too few workers to support a growing number of elderly people.