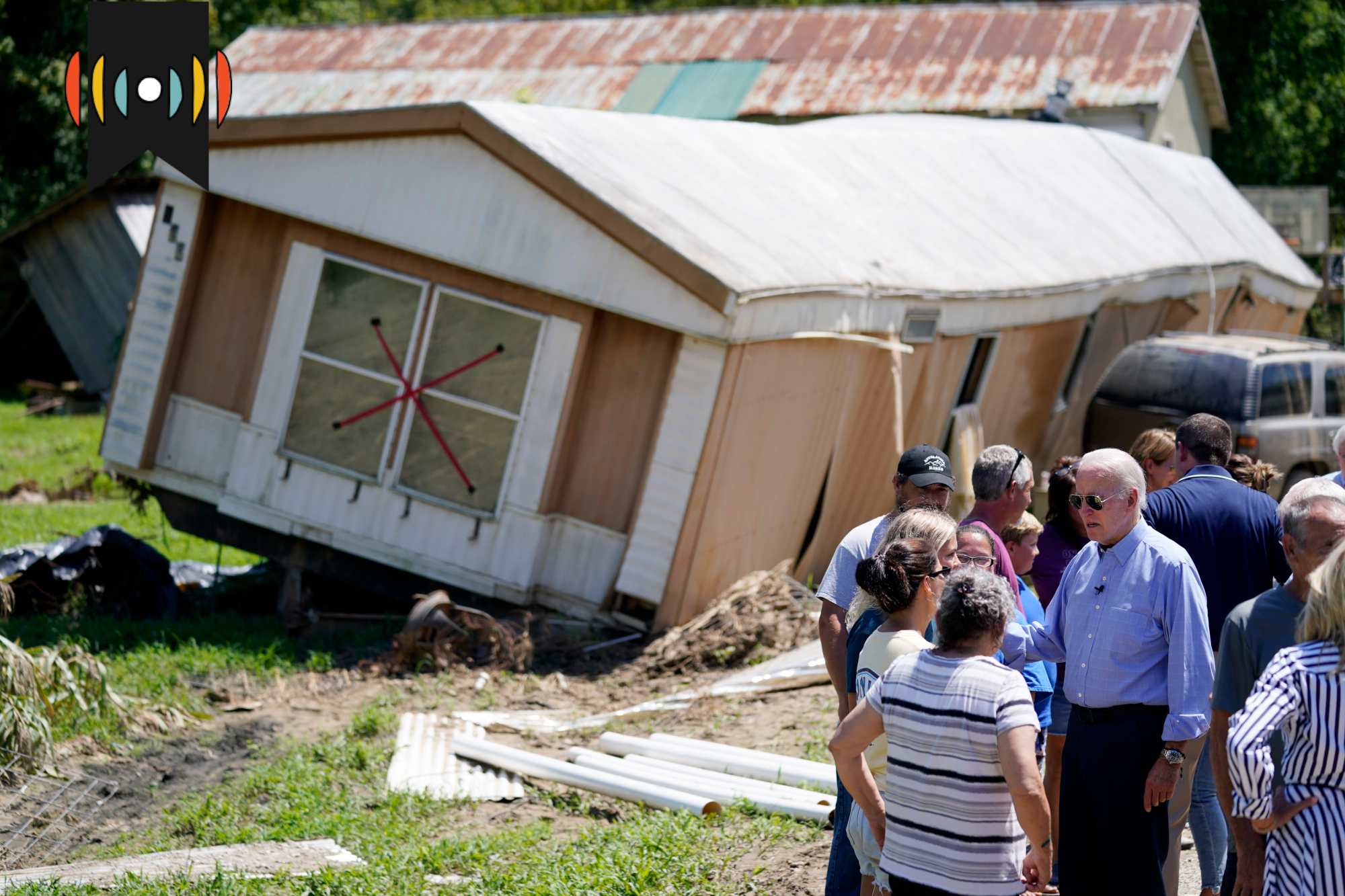 Biden in Kentucky » President Biden was on the ground in Kentucky on Monday to witness the damage from historic flooding.

BIDEN: I promise you, we’re staying until everybody’s back to where they were.

Behind him as he spoke was a single-story house that the storm had dislodged and tilted sideways.

More than a week ago, torrential rains dropped nearly a foot of water in some places in the span of just 48 hours.

BESHEAR: Sweeping them clear off their foundations, crashing them into bridges. And for some, their home’s just gone. We may not even know where it is. Maybe not one scrap that we can locate.

Officials raised the death toll from the flooding on Monday to 38.

JOSH SCHUMACHER: Twelve ships have been authorized to transport grain across the sea. Ten will haul grain out of Ukraine, another two will ship it into the country.

Russia, Ukraine, and Turkey will be inspecting all the ships leaving and entering.

Meanwhile, Moscow and Kyiv are both accusing each other of shelling the Zaporizhzhia nuclear facility in southeastern Ukraine.

UN nuclear chief Rafael Grossi says is calling for a military-free zone around the plant.

And he wants an independent third party to take over operations of the facility to avoid a potential disaster.

Israel/Palestine » In Gaza, a fragile cease-fire appeared to be holding on Monday as Israeli and Palestinian officials argued before the UN Security Council.

Dozens of Palestinians died, including children, during three days of fighting.

Palestinian diplomat Riyad Mansour asked the council, “How many more years does Israel get to impose its inhumane blockade on 2 million people?”

MANSOUR: How many more children do we have to bury until someone says enough is enough.

But Israel points to evidence that a misfired Palestinian rocket was responsible for many of the deaths over the weekend. And Israeli ambassador Gilad Erdan told the council …

ERDAN: The Palestinian Islamic Jihad deliberately fired 1,100 rockets at Israeli civilians, with roughly 200 landing inside the Gaza Strip, killing innocent Palestinians and among them young children.

Muslims killed in New Mexico » Albuquerque police said Monday they are searching for a car believed to be used by a suspect in the shootings of 4 Muslim men over the last nine months.

BARKER: If you see a dark-colored, four-door sedan Volkswagen Passat or Jetta we encourage you to call the police with that information.

Three of the killings took place in the past week. The other occurred last November. Police say they have reason to believe that the killings are related.

McMichael life sentences » The father and son who chased and killed Ahmaud Arbery in a south Georgia neighborhood have each received a second life sentence.

A federal judge on Thursday announced the new sentences against Travis and Greg McMichael after convicting them on federal hate crime charges.

A third man, William “Roddie” Bryan, who recorded cellphone video of the shooting. He received another 35 year sentence.

Arbery’s mother, Wanda Cooper-Jones, said she wanted to hear from him in court.

JONES: So it really showed the court, it showed the family, it showed everybody who’s been saying justice for Ahmaud what kind of people really took my son away.

The state court sentenced both Travis and Greg McMichael to life without parole earlier this year.

Olivia Newton John » SONG: [You’re the One That I Want]

Grammy-winning superstar Olivia Newton-John has died. She topped the charts with songs like “Physical” and “You’re the One That I Want.”

And millions will remember her as Sandy in the blockbuster film version of “Grease.”