Training the next generation of journalists

WORLD Radio - Training the next generation of journalists 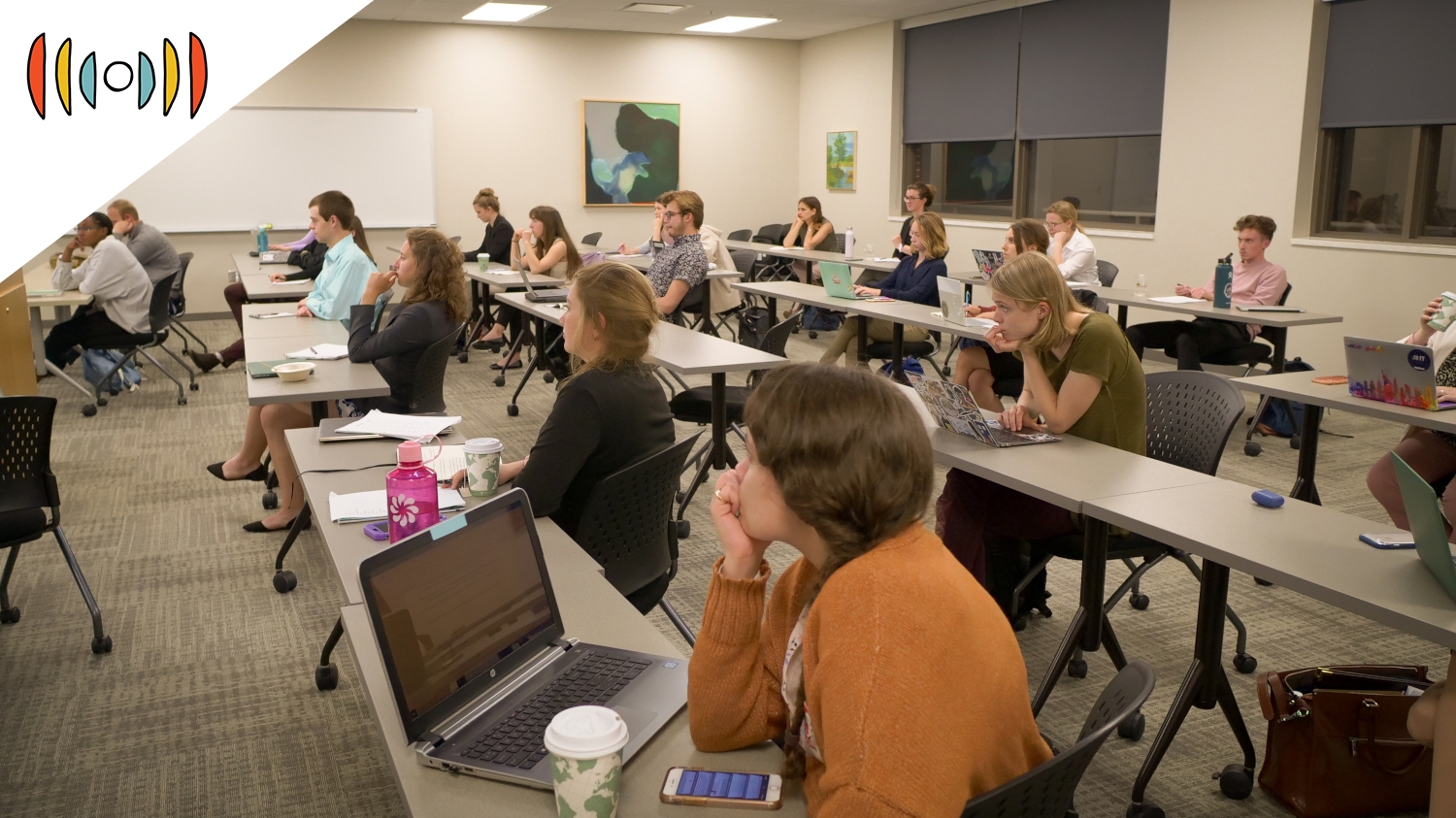 This is WORLD Radio, and we thank you for turning to us to start your day.

I’m on campus at Dordt University in Sioux Center, Iowa, here for the 21st World Journalism Institute. More about that in a moment.

If this month you became a first-time donor, thank you. As we’ve said, some families stepped up and provided money to triple match all first-time gifts of support this month up to $40,000.

And guess what? You really stepped up and used up all of that match already. So you met, and exceeded, the goal we’d set out with five days to spare. If you were part of that, again, thank you so much.

That gives us good momentum going into the month of June. That’s when we will ask those who give regularly to support our end-of-fiscal-year giving drive. And nothing’s more encouraging than to hear about new supporters coming alongside to help make WORLD’s journalism possible. That’s why we ask, that’s why you give.

Every dollar goes to programming, to journalism, and even helps make journalism training possible. That’s what we’re doing this week, now in Week 2 of our World Journalism Institute.

You heard students handle Culture Friday questioning last week and we’ll do that again this week. But today, we want you to hear from some of our students in the broadcast track. We’re training both for radio and for television and we have several of our WORLD Watch team working alongside the students. Brian Basham is here, Benjamin Owen. Myrna Brown, too. She’s on the WORLD Watch team and, of course, our radio team. Paul Butler is here with me. Sarah Schweinsberg last week.

But Paul lined up several students to talk a bit about their experience here. Let’s listen to some of that. I think you’ll be encouraged as you hear them.

CALEB BAILEY: My name is Caleb Bailey. And I am from Camarillo, California. I spoke to my parents on Saturday, and told them that I'm pretty sure in the seven days that I've been at WJI I've quite near learned more than I have in four years at college. And part of that is due to the fact that I'm getting hands-on experience.

I've also really enjoyed just being able to tell people's stories, whether they're in town or fellow students. Being able to tell their stories is something that's impactful and has helped me grow and understand the Lord better.

RACHEL MCCLAMROCK: I am Rachel McClamrock. I'm from Greensboro, North Carolina. My senior year, I didn't do as much reporting. And then I graduated in September. And so a large part of why I applied to WJI was that I felt I'm so out of practice. So it was really cool to come here and kind of relearn, like, “Oh, this is how you go up and interview people on the street” that “oh, this is how you put a video together.” And this time learning it from people who are currently in the field was really cool. And a really big confidence booster.

NEVA PIOMBINO: I'm Neva Piombino. I just graduated from Liberty University. And I live in Columbus, Georgia. We've learned a lot about the Christian worldview, and how it impacts our work as journalists, and just as professionals in general. Specifically, we have been learning from Marvin Olasky, about his work in reforming journalism. And he shared a lot of things with us about how we can approach our work in a godly mindset, how we can interact with the culture around us, and just also professional ethics that we can apply as journalists.

MIKAELA WEGNER: I'm Mikaela Wegner from Edmonton, Alberta, Canada. I'd say I've both enjoyed the most and the least just how hard I've been pushed. I've really enjoyed all the things that I've learned and how difficult it's been, but at the same time, yeah, it has been hard. But through that I've been able to learn a ton and be encouraged both in my faith and what I'm doing.

KATHERINE FUTCH: I'm Katherine Futch from Peachtree City, Georgia. I think one of the most beneficial things for me, I've been at WJI is definitely learning how to pursue a story with a Christian worldview. I come from a public university, and it's definitely very refreshing to look at journalism and in a whole other aspect of like looking at it through the Bible. And I think that's also been one of the things that I've enjoyed most is just having instructors that also care about your work but also about your spiritual life. Just whenever we first got here, I mean, Lee Pitts would pray with all of us. And that's something that I haven't got a lot of in my college experience. And it was just so refreshing, even like before we go to lunch, and everything Marvin takes time to pray with us. And I think also Marvin Olasky talks about reforming journalism has been so helpful and learning how to pursue a story and show compassion to whoever you're interviewing, show compassion whenever you're writing about maybe a difficult subject or a controversial subject. I think that's been really helpful.

LILLIAN HAMMOND: I’m Lillian Hammond from Rome, Georgia. Well, we have a couple classical pianists that love to play for us, which is really cool. I think I've enjoyed the most the fellowship with people from all kinds of different backgrounds and Christian upbringings. I think it's been really refreshing. And sometimes we'll stay up and have theological talks, which is really fun.

ABBI-RAE DE LA ROSA: My name is Abbi-Rae De La Rosa. And I'm from San Antonio, Texas. Since I've gotten here at WJI, I think the most that I've really enjoyed is the friendships I've developed as well as the hands-on experience. And learning how a journalist’s life goes from morning to night. And the least that I've enjoyed is the lack of sleep. But that hands-on experience has really, really helped me come to reality what life is going to be like in the future, and I look forward to it now.

REICHARD: It’s useful to hear these young people tell what World’s journalism training is doing for them. It mirrors what I learned at the mid-career course: our unique approach to reporting, along with like-minded people, who understand we’re aren’t only bodies and minds, but spirit filled, too. And I’ll add- a dose of reality about the long hours of broadcast journalists. It’s a fact of life.

EICHER: Exactly. They’re working on real-world projects that we may be able to use on this program and on WORLD Watch. That’s the goal.

We are in the thick of working on individual projects. Other students are busy writing daily news. The managing editor for our daily news online—that’s Lynde Langdon. She’s working directly with students. Lee Pitts—formerly with WORLD, now a professor here at Dordt—is also working with those students, as is WORLD editor Michael Reneau. Marvin and Susan Olasky are working with a half dozen students on more-involved feature stories, the kind you’d read in WORLD magazine

Last week, we introduced all the students to broadcast. All of them did brief television pieces after our friends at Alliance Defending Freedom put on a mock press conference for the students at which they learned about an important case at the Supreme Court.

Then they had to turn around all that material and produce and edit their own video story. So it’s been—and it continues to be—a great experience.

REICHARD: Love to hear that they’ve worked on the legal beat! There’s so much more we could be doing in that realm. I say, come on in, the water’s fine!

EICHER: Again, a few very long days ahead, but I expect to leave this year as I always do: exhausted but encouraged about the future of Christian journalism.

You can be discouraged or encouraged by the state of higher education today. But the caliber of students who sign up for this and endure all the work we throw at them. I have to say, that’s encouraging.

So do pray for these students. And, one more time, thank you for supporting our work financially and allowing so many of us to invest in them, drag up all our gear, and teach and work and keep it all going.

I read the blog that's being written by the WJI students, and am particularly impressed with Caleb Bailey's, Lauren Dunn's, Christine Grube's and Elaina Bals' entries. They clearly already possess a knack and a skill for writing! Bravo!