Hurricane Ian slammed the southwest coast of Florida, President Biden said he’ll ask federal officials to investigate any potential price gouging in Florida, much Havana and other parts of Cuba remained without power on Wednesday, the U.S. government is shipping another round of military aid to Ukraine, the White House once again denounced Moscow-backed referendums, European companies are ramping up security after the suspected sabotage of two underwater gas lines, Vice President Kamala Harris called out China over its recent behavior

King Point resident Maria Esturilho is escorted by her son Tony Esturilho as they leave behind the damage from an apparent overnight tornado spawned from Hurricane Ian at Kings Point 55+ community in Delray Beach, Fla., on Wednesday, Sept. 28, 2022 Carline Jean /South Florida Sun-Sentinel via Associated Press 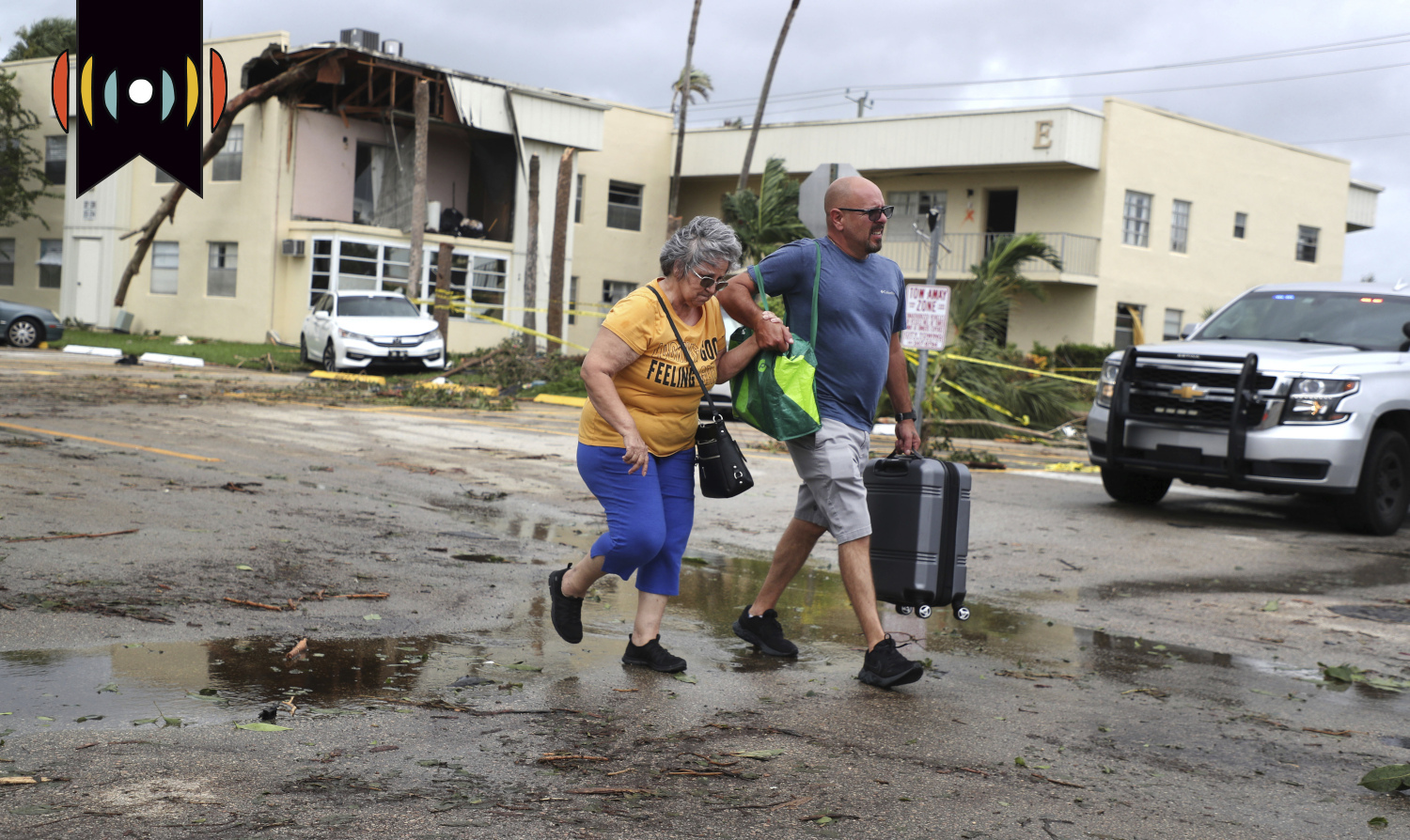 Hurricane Ian » Hurricane Ian pushed inland this morning, blasting central Florida with driving sideways rain and winds around 70 miles per hour or more in some places.

DESANTIS: That’s gonna rank as one of the top-5 hurricanes to ever hit the Florida peninsula.

The governor has requested a major disaster declaration from the federal government. And Florida Emergency Management Director Kevin Guthrie said Wednesday that help is on the way.

GUTHRIE: We literally have, with first responders across the state and additional ones coming in, there’s well over 10,000 responders statewide ready to do stuff.

Storm gas prices » With the storm bearing down Wednesday, President Biden said the hurricane “provides no excuse for price increases at the pump,” and he’ll ask federal officials to investigate any potential price gouging.

BIDEN: Do not - Do not use this as an excuse to raise gasoline prices or gouge the American people.

There were few signs that average gas prices jumped significantly in Florida as the storm approached. AAA put the statewide average at just under $3.40 a gallon, almost identical to a week earlier.

As of now, the storm is not expected to affect major oil and gas refineries.

Cuba aftermath » In Cuba, lights started to flicker on in the capital, Havana, but much of the city and other parts of the island remained without power on Wednesday.

That after Hurricane Ian knocked the nation’s power grid offline.

One longtime Havana resident says he doesn't remember an island-wide blackout ever happening before.

The storm also devastated some of the country’s most important tobacco farms. And officials blame Ian for the deaths of at least two people.

Ukraine aid » The U.S. government is shipping another round of military aid to Ukraine. White House Press Secretary Karine Jean-Pierre.

PIERRE: The United States is announcing an additional $1.1 billion dollar package of weapons and equipment for Ukraine.

That will include HIMARS rocket systems, armored vehicles, radars, and counter-drone systems.

That brings the total of U.S. aid to Ukraine to nearly $17 billion dollars.

PIERRE: And the Russian government falsified the results to advance the lie that the Ukrainian people want to be part of Russia.

She noted that armed Russian officials forced many residents to vote. And Moscow was celebrating the results before the balloting was finished.

Meantime, at UN headquarters in New York, the United States and Albania are jointly pushing a resolution to condemn the illegitimate votes.

GREENFIELD: We reject Russia’s action unequivocally. And we will continue to work with our allies, partners, and likeminded to impose costs on Russia.

Moscow claimed on Tuesday that voters overwhelmingly favored joining Russia. That sets the stage for the Kremlin to annex those regions of Ukraine.

Europe steps up security around pipelines » European companies are ramping up security after the suspected sabotage of two underwater gas lines. WORLD’s Mary Muncy has more.

MARY MUNCY, REPORTER: Explosions that damaged two pipelines from Russia to Europe highlighted the vulnerability of Europe’s energy infrastructure. And that prompted the EU to warn of possible retaliation if its pipelines are attacked.

Natural gas prices are climbing again in Europe after a recent dip. Russia benefits from higher energy prices and economic anxiety across Europe, but investigators have not yet determined whether Russia was behind the alleged sabotage.

Energy companies and governments said Wednesday that they’ve already begun to fortify their infrastructure and security to guard against future pipeline attacks.

Kamala Harris Asia » In Japan on Wednesday, Vice President Kamala Harris stood on the deck of an American destroyer at a naval base and called out China over its recent behavior.

HARRIS: We have witnessed disturbing behavior in the East China Sea and in the South China Sea. And most recently, provocations across the Taiwan Strait.

Harris said the United States will—quote—“deepen our unofficial ties” with Taiwan, which China claims is part of its territory.

To face down Chinese aggression, the U.S. will depend heavily on two key regional partners—South Korea and Japan. And relations between those nations have remained frosty since World War II.

One of the aims of the vice-president’s four-day trip to the region, is to help mend ties between the two U.S. allies.