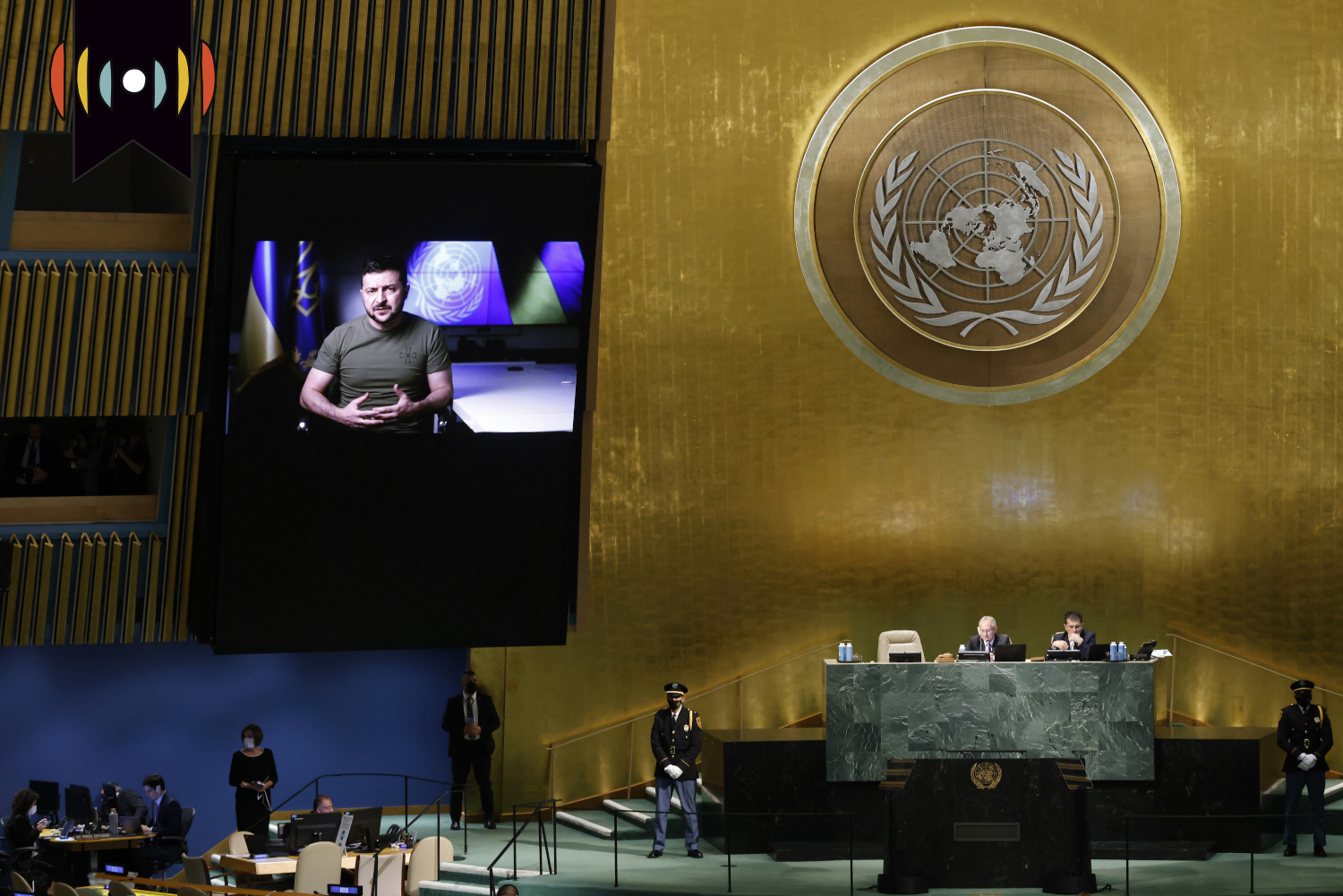 Russian representatives and their allies, of course, remained uncomfortably seated after Zelenskyy delivered a historic wartime video address from Kyiv.

ZELENSKYY: A crime has been committed against Ukraine and we demand just punishment.

Zelenskyy’s voice heard there, not a translator.

He said Russia’s decision to mobilize some reserve troops showed that Moscow isn’t serious about negotiating an end to the war.

Zelenskyy said after his troops chased Russian forces out of the town of Izium, they found tortured and mutilated Ukrainian soldiers and civilians in mass graves.

ZELENSKYY: We must finally recognize Russia as a state sponsor of terrorism.

He called for more sanctions against Moscow. He also urged world leaders to strip Russia of its vote in international institutions and take away its U.N. Security Council veto power.

The assembly voted overwhelmingly in March to condemn Russia’s aggression against Ukraine.

BIDEN: A permanent member of the UN Security Council invaded its neighbor, attempted to erase a sovereign state from the map.

Biden said reports of Russian abuses against civilians and its efforts to erase Ukraine —quote—“should make your blood run cold."

He condemned Putin’s latest nuclear threats against Europe and the sham votes this week that will proclaim that several Russian occupied regions are now part of Russia.

Biden also highlighted consequences of the invasion for the world's food supply.

SULLIVAN: They simply need more personnel and manpower given the success that Ukraine has had on the battlefield.

The Kremlin could mobilize as many as 300,000 reservists as it tries to regain momentum. A Ukrainian counteroffensive recently retook large swaths of territory.

The first such call-up in Russia since World War II also brings the fighting home in a new way for Russians.

Putin’s decree sparked anti-war protests and flights out of Russia have surged.

She claims Trump, his children, and his company also gamed the system to pay lower taxes and to get more favorable terms from insurance companies.

James' lawsuit is the culmination of the Democrat’s three-year civil investigation of Trump and the Trump Organization.

James wants Trump and his business to pay at least $250 million in penalties.

Lawyers for Trump say the lawsuit is baseless political grandstanding by James.

POWELL: Inflation is running too high. You don’t need to know much more than that.

The Fed is raising a key interest rate by three-quarters of a point for a third straight time. It’s hiking its benchmark short-term rate, which affects many consumer and business loans, to a range of 3% to 3.25%. That’s the highest level since 2008.

That raises the risk of a steep economic downturn. The White House says the United States can avoid that. But Powell told reporters …

POWELL: We don’t know. No one knows whether this process will lead to a recession - or if so, how significant that recession would be.

He said that will depend on a range of factors.

Technically, by some definitions, the U.S. is already in a recession, but the economy and the job market remain relatively strong for now.

Powell also signaled further rate hikes in the near future.

MARY MUNCY, REPORTER: Sales of existing U.S. homes slowed in August for the seventh month in a row. That as sharply higher mortgage rates make it more expensive to finance a home.

That’s a bigger drop than economists were expecting.

Last week, the average rate on a 30-year home loan rose to just over 6 percent for the first time since 2008.