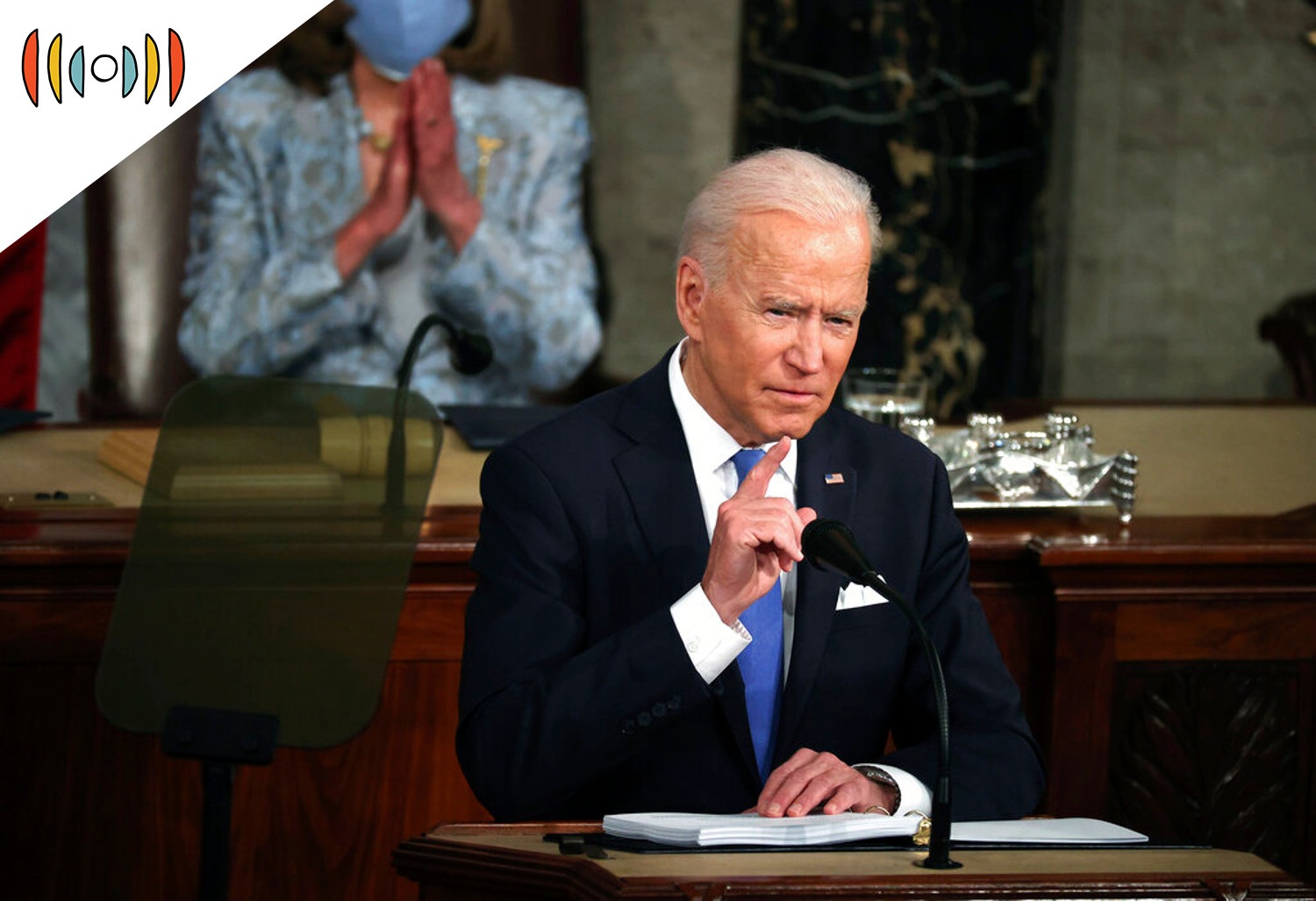 President Biden addressed a joint session of Congress for the first time last night speaking to a smaller than usual crowd.

Instead of a packed chamber of 1,600 people, just 200 attended—by invitation only.

The president said when he took office in January, “America’s house was on fire.”

BIDEN: Now, after just 100 days, I can report to the nation, America is on the move again! [CHEERS]

He highlighted recent successes in the COVI-19 vaccine rollout and his biggest legislative victory with help of a Democrat-controlled Congress:

BIDEN: Together we passed the American Rescue Plan, one of the most consequential rescue packages in American history.

The president also highlighted a recent employment boom as businesses reemerge from the pandemic. And he took the opportunity to pitch the final piece of his $4 trillion dollar spending proposal.

He said Washington must keep spending big to keep America on the road to recovery.

BIDEN: But we can’t stop now. We’re in competition with China and other countries to win the 21st century. We have to do more than just build back. We have to build back better. We have to compete more strenuously than we have.

He also took aim at voting rights laws, and he called on Congress to send him a police reform bill named after George Floyd. He added that he aimed to root out what he called systemic racism in housing, education and public health.

To the president’s call for police reform, Scott, who is African American, noted that Senate Democrats scuttled a police reform bill he authored last year.

SCOTT: My friends across the aisle seem to want the issue more than they wanted a solution.

He also charged that Democrats are weaponizing race for political gain.

Scott repeated GOP criticism of President Biden’s big spending plans, calling the proposals liberal wish lists. And he said the president’s plans to raise taxes on upper income families and corporations to help pay for it will kill jobs and hurt Americans at every income level.

And he called on the president to work with Republicans on bipartisan solutions.

Judge declines request to release video of Brown shooting » A judge on Wednesday denied requests to release body camera video in the case of Andrew Brown. Deputies fatally shot Brown inside of his car last week in Elizabeth City, North Carolina as they tried to arrest him on drug-related warrants.

Judge Jeffery Foster said he believed the videos contained information that could harm the ongoing investigation or threaten the safety of people seen in the footage. He said the video must remain out of public view for at least 30 days.

Attorney Michael Tadych is a petitioner for media outlets asking for release of the footage. He said he may appeal the judge’s decision.

TADYCH: And as I said in my argument, I think our clients through the First Amendment have a right to those records.

However, the judge said Brown’s family can view videos from multiple cameras.

The family and its attorneys saw a 20-second portion of one body camera video earlier this week. And after viewing that footage, the attorneys suggested Brown’s car was stationary and that he had both hands on the wheel when deputies shot him.

But District Attorney Andrew Womble on Wednesday disputed that.

WOMBLE: The next movement of the car is forward. It is in the direction of law enforcement and makes contact with law enforcement. It is then and only then that you hear shots.

The FBI this week launched a civil rights probe to investigate the incident.

Recorded COVID-19 deaths in India surge past 200k » Deaths from COVID-19 in India officially surged past 200,000 on Wednesday.

That is the recorded number deaths attributed to the illness. The actual number is believed to be far higher. Some experts believe it could be several times greater.

Mortality data in India was poor even before the pandemic, with most people dying at home and their deaths often going unregistered.

Deaths have skyrocketed as a recent surge in coronavirus cases blindsided authorities.

Dr. Lance Pinto is a respirologist at a hospital in Mumbai.

PINTO: I think nobody anticipated the scale and the magnitude of what we are facing right now. I think all of us got a little complacent based on the numbers reduced to such low levels in the month of January—that we thought that the worst was behind us.

Hospitals are scrambling for more oxygen, beds, ventilators and ambulances.

The United States, other countries, and the World Health Organization are sending emergency supplies. And they can’t arrive quickly enough.

India's daily recorded deaths have nearly tripled in the past three weeks.