What do billionaire trips to space mean for the rest of us? 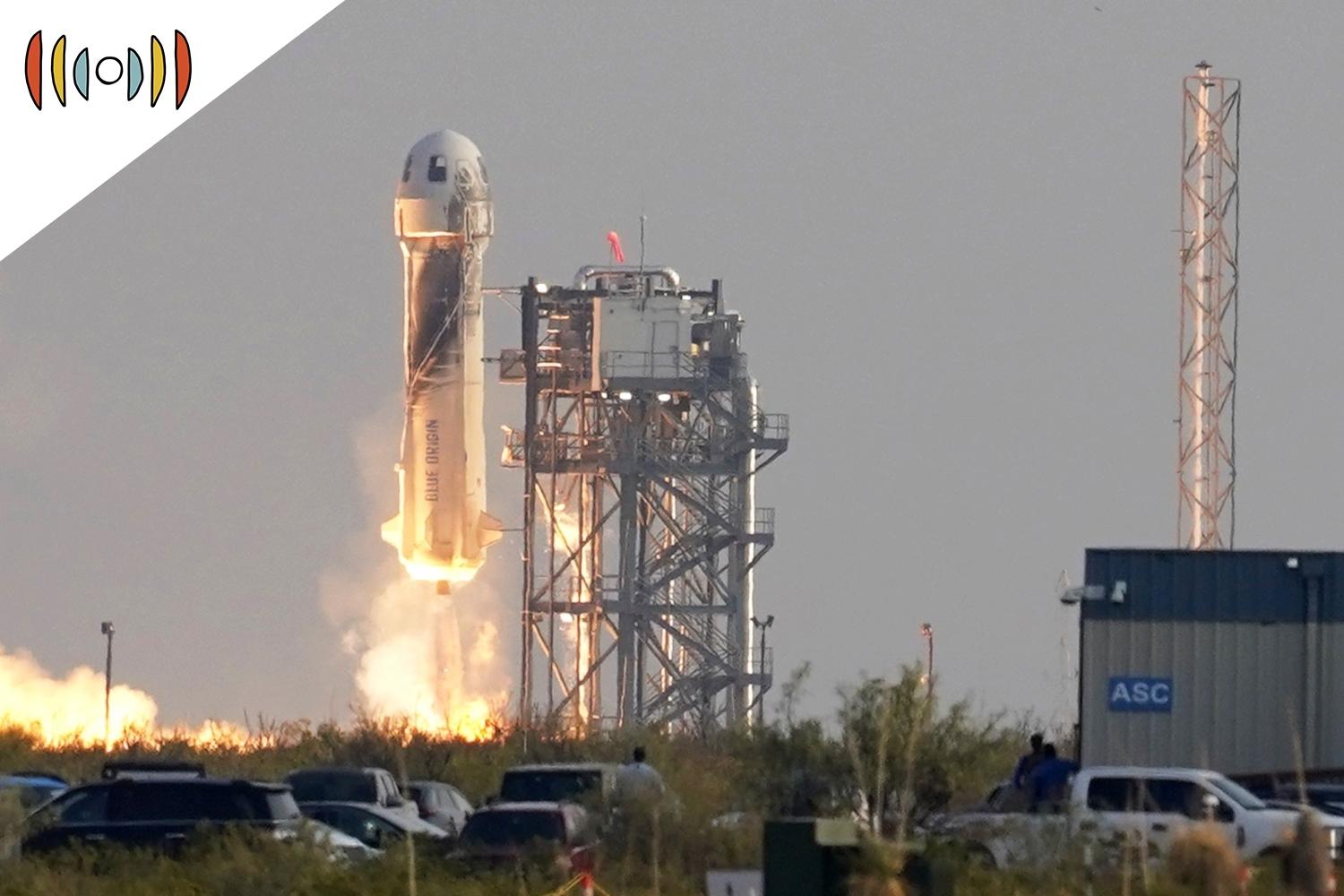 NICK EICHER, HOST: Today is Wednesday, July 21st. Thank you for turning to WORLD Radio to help start your day.

AUDIO FROM LIFT OFF [COUNTDOWN]

As you heard just a moment ago, Amazon founder Jeff Bezos and three other passengers blasted off from a launch pad near Van Horn, Texas, this morning.

AUDIO FROM LIFT OFF [SOUND OF ROCKET TAKING OFF]

The booster that got them off the ground is called the New Shepherd—it’s reusable—and it was the first to return to earth. A few minutes later, the RSS First Step capsule took over.

EICHER: With two successful private missions to space in recent weeks, the concept of “Space Tourism” is fast becoming a reality, though not everyone is ready to sign-up, as WORLD interns Caleb Bailey and Josh Schumacher found out when they conducted a straw poll in Asheville, North Carolina.

AUDIO: [“WOULD YOU GO TO SPACE IF YOU HAD THE CHANCE?”]

Well, more than 60 percent of those we polled in our very unscientific survey said “No. They wouldn’t go to space if they could.”

REICHARD: But both Jeff Bezos and Richard Branson say there’s already a long waiting list of those who would. So what might that mean for the rest of us?

PAUL BUTLER, REPORTER: Billionaire Richard Branson had 17 years to think about what he’d say after Virgin Galactic’s first successful crewed space flight. But at his July 11th press conference, he struggled for words.

BEZOS: The most profound piece of it for me was looking out at the earth and looking at the earth’s atmosphere. Everybody that’s been up into space, they say that it changes them.

For nearly 20 years, a handful of private companies have vied for the top spot in the civilian space race. Space X was an early leader with its commercial, communication, and government contracts.

But Blue Origin and Virgin Galactic had much smaller goals. This month, they both took a giant leap toward their vision of accessible space travel.

FAULKNER: The emphasis of these two is pleasure craft.

Danny Faulkner is astronomer for Answers in Genesis.

FAULKNER: When you go on vacation, you can go to the Grand Canyon, go to Hawaii, go on a cruise, or you can go into space.

That’s right. They want to make a run at making space tourism a reality.

Virgin Galactic uses a rocket plane strapped to the underbelly of a large aircraft—the VMS Eve. It takes off from a long airstrip. Once the two vehicles reach about 45,000 feet, they separate, and pilots in the smaller spacecraft burn the engine for 60 seconds. The ship reaches an altitude of about 50 miles...NASA’s definition of space.

Last Sunday, Branson’s crew included two pilots, and three additional aeronautic specialists. The crew experienced weightlessness for about five minutes. Before floating about the cabin, Richard Branson addressed the children of the world:

BRANSON: To all you kids down there. I was once a child with a dream, looking up to the stars. Now I’m an adult in a spaceship with lots of other wonderful adults looking down to our beautiful, beautiful earth. To the next generation of dreamers, if we can do this, just imagine what you can do!

The VSS Unity re-enters earth's atmosphere at a much lower slower speed than most spacecraft, so it doesn’t require much heat shielding. Like NASA’s space shuttle, the craft glides to its landing site.

The short rocket burns liquid hydrogen and liquid oxygen for about two minutes. A fully autonomous capsule sits atop the rocket. There are no pilots aboard. No interior controls.

During its maiden voyage with human passengers it crossed the Karman line—the international definition of space—62 miles above the earth’s surface. It reached its apogee, or high point, four miles later.

Once there, Jeff Bezos and his three fellow travelers threw Skittles candies across the cabin into each other’s mouths. They floated ping pong balls, and performed summersaults before buckling back in for re-entry.

Once the First Step capsule is within 10,000 feet of the ground, parachutes emerge, and slow its descent to 15 miles an hour. When it’s just a few feet from the ground, a strong blast of air cushions the landing.

FAULKNER: We’ve been putting people into space for 60 years…

FAULKNER: ...and for much of that time, everybody assumed it was a government program—you just couldn’t do that privately, but history has shown that private initiative always comes into play in these sorts of things.

In the midst of all the positive press, some have been critical of this “Billionaire Space race.” Private funding has made travel to the edge of space more affordable, but it’s still way out of reach of many.

Faulkner believes that over time, that may change.

FAULKNER: When people argue that only the rich can do something, that's fine until everybody can afford it. Only the rich could afford an automobile—at one time they were very expensive. But Henry Ford took it upon himself to make it the common man car. So yeah, it might be a rich man's game to go and put a guy into space, but it's conceivable that in a few decades, we could actually have affordable space travel for everybody...

Watching the post-flight press conferences, it was clear that organizers had done their market research. They attempted to convince their critics of the value of these ventures. Both crews described their flights in historic terms—riding the tails of earlier explorers. Bezos brought along Amelia Earhart's goggles and fabric from the Wright Brothers. Branson took a more emotional approach, carrying pictures of his kids and a deceased team member.

They both took the opportunity to announce undefined climate research initiatives. And Bezos even used the press conference to unveil a $100 million award for people fighting for social change.

For Danny Faulkner though, these flights provided a great opportunity for a different kind of message.

FAULKNER: It's like a giant billboard, the world around us, the space around us, advertising the fact that there is a creator and that brings up the whole question of sin, the fact that there's a great gulf between us and our Creator. But God has provided a way of salvation through the finished work of His Son, Jesus Christ on the cross and his resurrection and faith through him. That His finished work can bring us to that proper relationship to God. That's, I think, the most important thing in life. And that is the thing that's most important in this that people need to see that rather than just the cool factor of going into space.