The start of market season 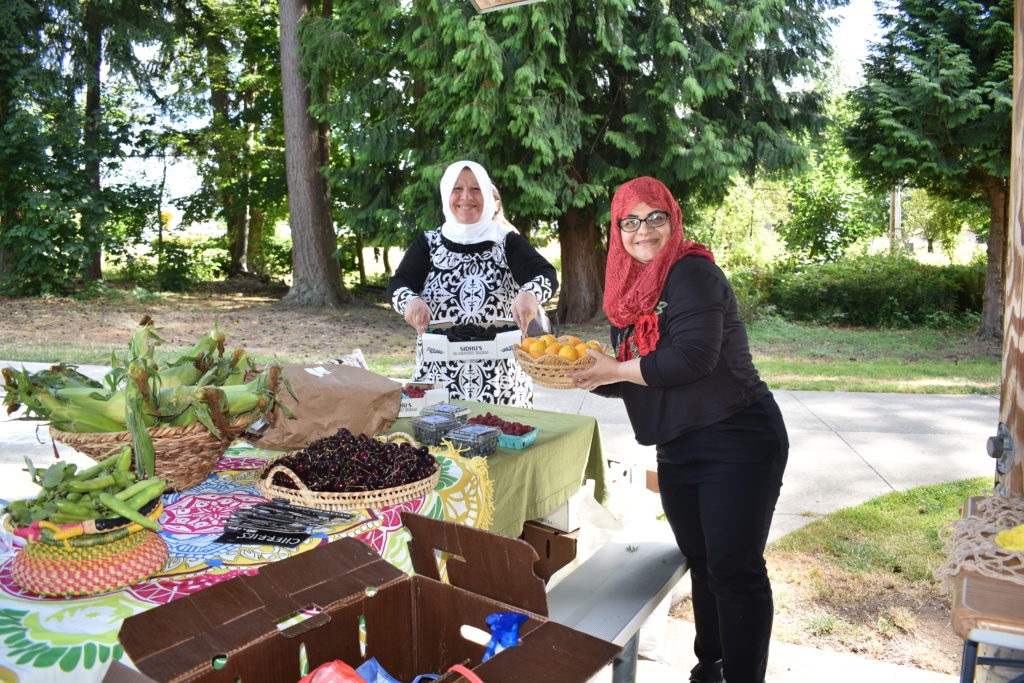 NICK EICHER, HOST: And I’m Nick Eicher. In many parts of the country, next week is the beginning of “market season.” Fresh baked breads, grass-fed beef, raw honey, and of course unique fruits and vegetables.

The farmers market in Kent, Washington, is set to open. Last fall, WORLD Radio’s Jenny Lind Schmitt spoke with the farmers who are going to make it happen next week.

JENNY LIND SCHMITT, REPORTER: When Noel Fadonougbo moved to the United States, he missed the vegetables he ate growing up in Benin. Then he heard about the East Hill Farmers’ Market in Kent—a Seattle suburb. The market specializes in produce native to Africa and the Middle East:

FADONOUGBO: It’s like an American who goes some part of the world and there’s no cheeseburger, and they give you space to make a cheeseburger! That’s how I feel!

Fadonougbo is more than a customer—he’s one of 12 immigrant farmers growing produce for the market.

FADONOUGBO: There are some typical beans from West Africa that we don’t see in the market here that we grow on that farm. And there is okra! We don’t often find okra here.

The Kent East Hill Farmers’ Market is the handiwork of Shamso Isaak, a longtime resident of Kent and immigrant from Somalia.

ISAAK: When we first started in 2014…we dreamt about bringing healthy foods to our community….

Over the last decade, lower-income populations have moved into Kent. At the same time, local stores started disappearing. Isaak saw increasing health concerns among the immigrant population, and looked for a way to help.

ISAAK: When we find out that a lot of stores have been closing in Kent, that’s when we said, okay, what is the definition of a food desert? And that was us: living in a place where we have to drive to go get food.

But since many refugees don’t have cars, Isaak began dreaming of a local farmers’ market within walking distance from the low-income apartments where many live.

The Kent East Hill Farmers’ Market began in 2016. Risho Sapano is the co-founder.

SAPANO: And we hosted a couple of meetings with the community, too, and we invited others farmers’ market communities who did it so we can learn from them.

Sapano is originally from Sudan. She wanted the market to do more than provide affordable, healthy food for her community. She wanted to offer produce that immigrants were familiar with—food not found in most local stores.

At first, Isaak and Sapano couldn’t find vendors who would commit to a once-a-month market. So they approached immigrant farmers at local Pea-Patch Gardens—offering them free vendor space in exchange for growing traditional vegetables. The plan worked.

The first year there were only three farmers. Four years later, that number has quadrupled.

Meanwhile, not far away were eight abandoned greenhouses. Northwest Harvest, a local food non-profit, arranged access to the greenhouses for Kent Market volunteers.

Hillary Bii grew up farming in Kenya. He was part of the group that got the greenhouses ready to use again.

BII: It was bad. All the weeds grown, everything was left the way it was. So we had to clean it up, move everything out and started building boxes and putting all the soil and manure to make things grow.

Bii and other farmers tended greenhouse crops evenings after work and on weekends. They grew common crops like cucumbers, tomatoes and kale, but also planted collard greens, okra, spider plant, cowpeas, and amaranth—vegetables that don’t usually grow in Washington’s cool climate, but thrived in the greenhouses.

BII: We had a lot of the African community in Kent coming and buying the amaranth. We also had another traditional green called mulukhiyah and they also loved those greens that reminds them back in the country that they’re came from.

Amaranth and spider plant were big sellers. Kale—not so much.

AUDIO: Camels are milked on the weekend.

The market has also attracted other ethnic food vendors. One sells milk from a camel dairy in Colorado.

ISAAK: We use for drinking. In our culture, camel milk is more nutritious than cow milk, so we drink a lot of camel (milk).

This market provides much more than food, it’s a gathering place — a melting pot– for the many different cultures present here.

Saadiyah Albdri missed her daily visits to the bazaars of her native Iraq. So she comes here for the fresh produce—but also finds connection with her neighbors.

AUDIO: She says I’m so happy about this farmers’ market. She interested in all kinds of people here. And she say she lives close to this space, this park.

In addition to selling his produce, vendor Hillary Bii says he also appreciates the exposure to different cultures and the chance to sample the various ethnic cuisines—like camel’s milk!

The Centers for Disease Control and Prevention awarded the Kent market a grant, allowing it to expand this year’s market to twice a month. So Isaak and the others are busy recruiting more farmers—immigrant and non-immigrant—to expand the greenhouse project and provide more diversity in market offerings.

Meanwhile, Fadonougbo grew garlic through the winter, and has planted for spring.  And he’s also tending a different kind of crop. When he heads to the greenhouse, he takes his daughters with him: teaching them how to farm, to care for themselves and for others.