The race to Mars

WORLD Radio - The race to Mars 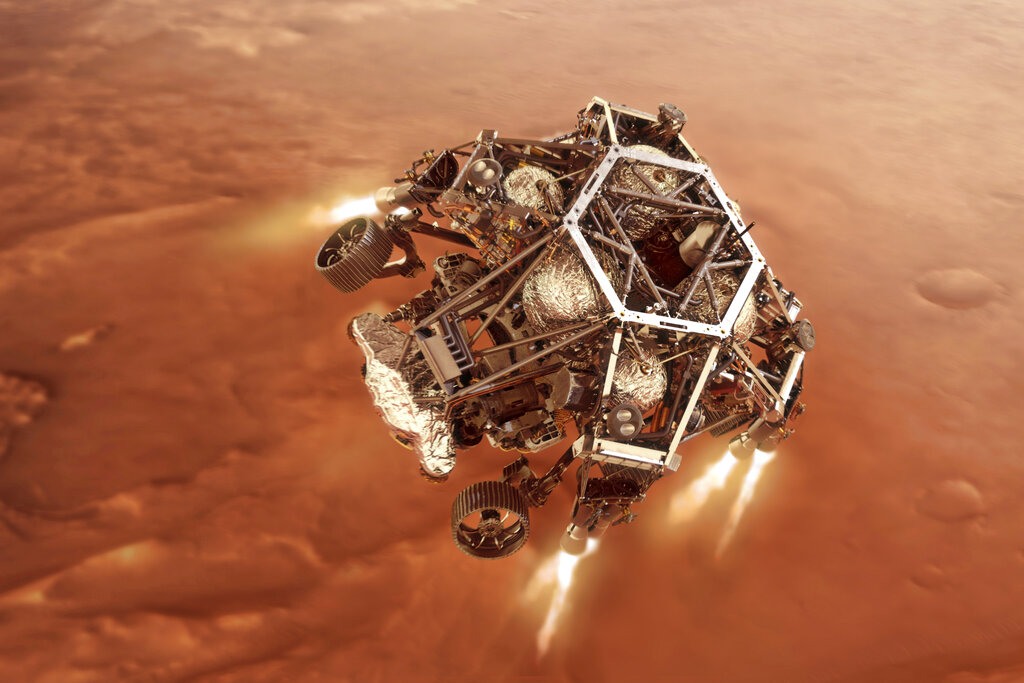 MEGAN BASHAM, HOST: Coming up next on The World and Everything in It: Mars.

At about 4 p.m. Eastern time today, NASA’s Perseverance rover will touch down on the Red Planet. It took off from Cape Canaveral in July and traveled nearly 300 million miles to get to its final destination.

MARY REICHARD, HOST: The $2.4 billion mission is designed to hunt for signs of life. What kind of signs? Well, joining us now to answer that question is Jim Murphy. He’s an astronomy professor at New Mexico State University and his research focuses on the weather and climate on Mars.

Professor Murphy, thanks so much for joining us today!

JIM MURPHY, GUEST: Thanks for the opportunity to talk about this.

REICHARD: Start by telling us where Perseverance will be landing and what the conditions are like there.

MURPHY: Alright. It’s targeted to land in an impact crater called Jezero Crater. It is about 25 miles across, maybe a little less than a kilometer deep. So not huge compared to some of the really big craters on Mars. The interesting thing about Jezero Crater is when you look at it from orbit, it looks as though water flowed into it at some point in the past, and it actually looks like a river delta that we see here on Earth where large rivers deposit their water and material into a large body of water. And the purpose of going there is, well, gee, if there was water there in the past—either standing water as a lake or a river flowing into it—river sediments apparently are pretty good at preserving evidence of past biological activity within the minerals themselves and being laid down. So, within the materials that would have been laid down by water in this location, maybe there’s some chemical signatures that life existed there in the past.

REICHARD: Why did NASA pick that spot for the landing?

MURPHY: Specifically because those people who are knowledgeable about such things and looking at geological features and correlations here terrestrially with where you might find chemical evidence that life exists. There were probably five or six locations that were tentatively listed as being a possibility for the location for this lander or rover, really, to set down on the surface. So, the physical characterization not just for science purposes but for safe landing and then the ability of the rover to rove around would come into play as well. When all those pieces were put together, it was determined that Jezero is the best location to send this mission.

REICHARD: So it’s looking for signs of life. What kind of signs? And what kind of life?

MURPHY: The signs of life, it’s really looking for chemical signatures of previous life. I tend to think of coral reefs. Coral reefs are living structures, but they don’t survive forever. But it’s not as though the coral reef “dies” and then just disappears. It stays around. So, you could go a thousand, a million years subsequent to that and possibly still see the chemical signature and say, oh, this was a living organism at some point in the past. And I think it’s similar to what is being hunted for with the instruments aboard Perseverance, and that is chemical signatures that suggest life existed there previously.

REICHARD: NASA isn’t the only space agency landing on Mars this month. Who else has missions there and is it going to get crowded?

MURPHY: It is. So, last Tuesday, the United Arab Emirates had their Hope orbiter mission arrive on Mars. It’s focused on atmospheric science of Mars, so characterizing the atmosphere from the surface to thousands of kilometers above the surface and understanding the vertical interactions between the layers in the atmosphere. And that’s very exciting. The Chinese space agency had a spacecraft arrive last Wednesday. It is a spacecraft that has an orbiter component, but it also has a lander rover component. All three of those pieces have gone into orbit around Mars successfully and I think it’s probably several months before the lander rover system will be dropped off and descend through the atmosphere and land on the surface. So, yeah, it’s an exciting time for Mars exploration.

REICHARD: Revoice: Not everyone is a space fan, so for those people: Why should we be excited about this?

MURPHY: I remember the first time I looked through a telescope and saw the moon and the craters on the moon and was kind of awed that I could sit here, be on the surface of the Earth and see that. I’m excited scientifically because it is a compelling question: did life ever exist on Mars? And now we have much better technology. We’re better able to ask these interesting questions. And for my own bias, I’m pleased that this rover has a meteorology package on it. It’ll measure wind and temperature and humidity and ground temperature and some characteristics of dust in the atmosphere. Those of us who study the atmosphere can learn that much more.

REICHARD: Jim Murphy is an astronomy professor at New Mexico State University. Thanks so much for joining us today!

MURPHY: Oh, it’s a pleasure. It’s a fun thing to talk about.

(NASA/JPL-Caltech via AP) In this illustration provided by NASA, the Perseverance rover fires up its descent stage engines as it nears the Martian surface.