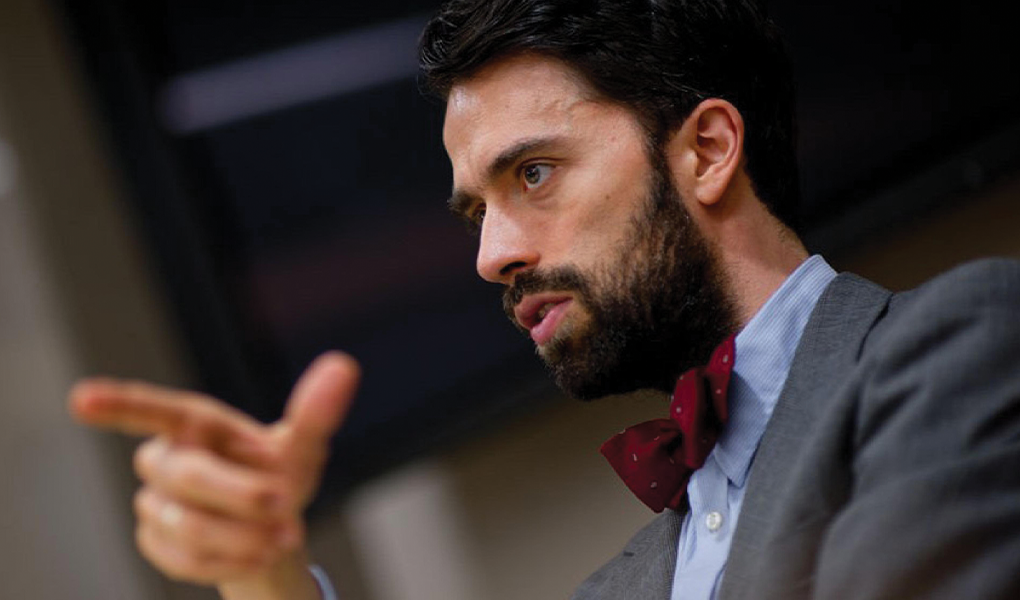 Today, a conversation with Stephanos Bibas—a U.S. Court of Appeals judge for the 3rd Circuit. In 2012, he wrote an analysis of the American criminal justice system called The Machinery of Criminal Justice.

EICHER: What Bibas found was that in the early years of our republic, courts were run mostly by laymen. Victims and defendants often interacted face to face. And jury trials frequently passed moral judgments. Justice, in other words, was more than punishment; it also sought reconciliation and healing.

REICHARD: Today the plea bargaining system often silences the parties. And while it may be more efficient, or at least faster, it frequently sacrifices redemptive justice. Judge Bibas believes criminal justice reforms ought to include a return to some of those founding ideals.

Here’s an excerpt of Marvin Olasky’s conversation with Bibas from earlier this year.

MARVIN OLASKY, EDITOR IN CHIEF: If you’ve been reading news over the past year, there’s been an interesting emergence of a certain liberal and conservative coalition around criminal justice reform—which used to be a liberal issue—and very properly, it is not a liberal issue, or it is not just a liberal issue.

Conservatives care a lot about that and so there’s a lot of stuff bubbling around. There was a First Step act that actually Congress passed and President Trump signed into law involving some questions of what happens to people in prison. Groups like Prison Fellowship, which has its headquarters not all that far away from here, have certainly been involved in this over the past 10 to 20 years. There are lots of questions about whether nonviolent offenders should be in prison, how long sentences should be. But I want to start off by just noting what gets this book off to a fast start is that—even in the first 11 pages—28 times you used the word “moral” or “morality:” words that are rarely found in discussions of criminal justice these days. Why are you doing that and what influence would that have on our thinking about the larger criminal justice problem?

BIBAS: Well, it’s (an) important question how you think about the point of criminal justice. For centuries, ordinary people have understood that criminal justice has a point, has a purpose. It’s supposed to figure out who did it. If the person did it, blame them appropriately: Punish the person with appropriate consequences. But then heal the wrong, or the wound of the crime. And if we look at our history, that’s the way it’s been done.

People have a misunderstanding about the past. Only a small sliver of people wound up getting executed, or exiled, or branded. Most people had a punishment, it was short term, and often they would admit or confess what the crime was. I stole the pig or sometimes they’d say: “No, that was my pig – I just lent it to you.” You’d have a jury. The jury would hear it out and they would decide who was in the right, who is in the wrong, and implicitly—at least how—what kind of punishment the person deserved.

And nowadays we’ve moved very far from that idea towards controlling crime, or just about public safety, or about processing cases. And that kind of misses the way that non-lawyers understand the point, and it misses the way that we talk about with our own kids. When we discipline our kids, are we doing it merely to stop the naughty behavior? No, we’re doing it to teach lessons. We’re doing it to vindicate the injured sibling. We’re doing it to kind of restore order in the family. And I don’t mean to say we can just reduce the polity down to a family model, but I do mean to say there’s something deeply intuitive about it’s being connected. Justice being about right and wrong: Albeit, cabined within the laws of a state, but you can’t just divorce the two entirely.

OLASKY: Judges are supposed to be teachers.

BIBAS: Right. And what the judge does in announcing the jury’s verdict or in proclaiming a sentence is itself a morally fraught act. If you ever go to a courtroom, maybe the most you’ll hear of it is when the judge pronounces a sentence. The judge lets you know, talks about what the victim endured and the defendant may, sob, may apologize, the defendant’s families may be there and sometimes it’s done in a way that is cathartic and vindicating. And then sometimes it’s done in a very mathematical, bureaucratic-speak way that just kind of rushes it along. And you know, [it’s done] in a few minutes and gets it off the table without doing any of that moral judgment.

OLASKY: So what reforms have you seen so far that actually are hopeful? For example, on the question of prison work rather than idleness? Is there anyone, is there any model out there of how to do this?

BIBAS: Yeah, so if you look at—it’s funny, people like to stereotype Southern States, but go look at—Texas, Louisiana…their prison systems actually have a fair number of inmates performing work and productive work. Not just ridiculous “make work.” Um, you know, the federal prison system has more prison industry than most. And as long as you can deal with the church-state challenges—I mean you started out by mentioning the Prison Fellowship—I’m a big fan as long as non-believers or those who choose not to take part, don’t receive any worse treatment. If congregations want to partner with a prison and go in and minister to the prisoners and connect them up, [then] when that prisoner comes out, that person may have an apartment, may have a congregation, may have a job lined up for him or her. And if you don’t…you know what prisoners come out with? They come out with a bus ticket and $20, maybe $50, right? So they’re going to go right back to dealing drugs on the same street corner.

If prison fellowship or some other group like that’s connected up with them, they have a community. And we human beings, we are…my own faith is, we are persons in relation to one another. We belong in communities and if we can welcome people back… and like you’re not the sum of your worst actions. You are not forever an “ex-con” brand on your forehead. You’re still a human being. We can figure out a way we appropriate skepticism and caution to, bring people back. I mean, that is the greatest gift that you can give. And Jesus did say go minister to those in prison, and I’m very glad that Prison Fellowship takes that command very seriously. And it’s the kind of thing that has to bubble up from the bottom up from the grassroots. I don’t see a single bill or a single national reform doing it.