The livestock show must go on

WORLD Radio - The livestock show must go on 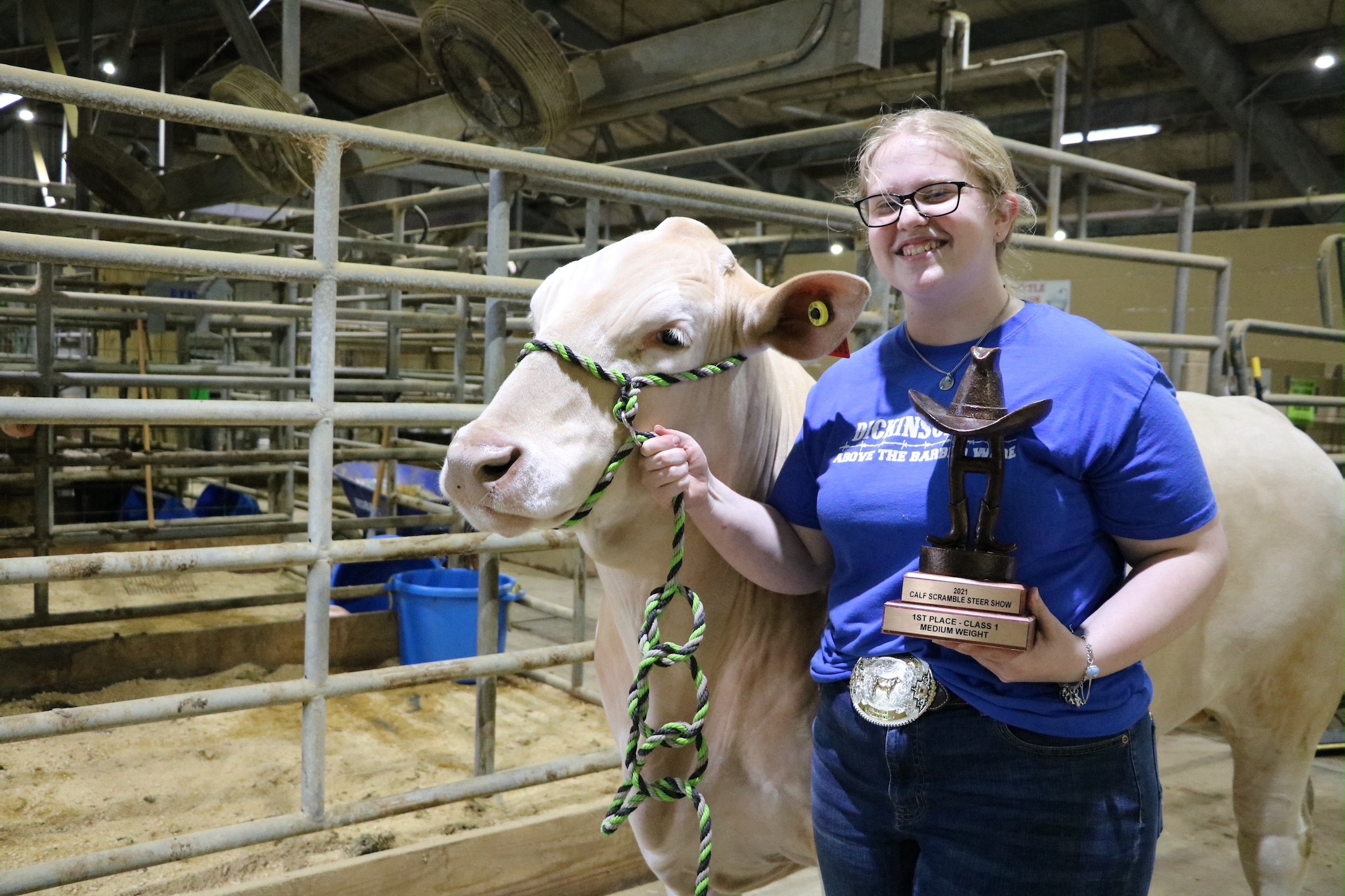 When Covid began to emerge around this time a year ago, the Houston Livestock Show and Rodeo shut down. Thousands of students from across Texas lost their chance to show and sell their livestock and compete for scholarships.

EICHER: Brooke McCrumb was one of those students and we introduced you to her last year.

This year, the disappointed, frustrated, yet determined young lady and her peers set their sights on the 2021 show.

They invested time and money in new livestock projects with the hope that the show would go on.

MCCRUMB: I had two steers and four lambs this year so I was extremely busy…

BONNIE PRITCHETT, REPORTER: Brooke McCrumb stands by the stall holding one of her sheep. His name is Springer. It’s March 1st but fans drone away overhead in an effort to keep flies at bay inside the Dickinson High School Ag barn.

Her two steers—August and Blue—are penned on the other side of the barn. She points to August, the white 1200-pound American Breed Cross, or ABC, steer. Their first meeting last spring wasn’t pretty. As a 650-pound calf, August dragged McCrumb and her parents across a muddy field, fighting their attempts to load him in a trailer.

MCCRUMB: He’s a sweetheart. Unlike my other ones he isn’t that big of a handful. I mean, besides from getting drug at the beginning of it all, I feel like a week later he was halter-broken and a perfect angel…

McCrumb won August last year through the Houston Livestock Show Calf Scramble, a highlight of the rodeo events. Students who wrangle a calf get a $1,750 check to buy one of their own. But with no rodeo last year McCrumb got her calf in a lottery.

JUDGE: This yellow steer, I think ties together a lot of things I value pretty high…

MCCRUMB: You write your monthly reports. You do your monthly expenses. You do certain essays. Shows I went to, anything that happened, major occurrences…

It’s like running a one-head cattle company. All of that work culminates at the next Houston Livestock Show—if there is one.

It’s days before the Houston Livestock Show is scheduled to start, and students and parents are on edge. Clay Menotti is a teacher and the Future Farmers of America adviser at Dickinson High School.

MENOTTI: They’re very nervous as well as I am. Every time I talk to, whether it’s a student or a parent, I just say, “As of right now, they’re still doing this…”

Their anxiety is not unfounded. Last year his students got word the show was canceled as they waited in line with their show heifers to enter the Houston livestock barn.

MENOTTI: This year it’s been a roller coaster up and down…

Houston is in Harris County where authorities have not reduced the COVID-19 alert level from its highest warning since June. Discussions between event organizers and local authorities provided a few assurances that, at least, the livestock show would go on.

MENOTTI: Well, they’ve never really necessarily said, ‘No, we’re not having it. There’s always been some speculation that they would cancel. So, for instance, the Fort Worth Stock show that’s always in January, it was canceled this year. When we found out about that, it kind of didn’t bode well for the shows later on in the Spring…

On February 3rd, organizers cancelled the rodeo. But Menotti held out hope for the livestock show.

MENOTTI: I kind of applaud the Houston Livestock Show Committee because they have stayed true to their word that they want it to be about the kids, about the students and their projects and they were adamant about having the Livestock Show the whole time…

Their bullheadedness paid off on March 15th.

The steer division—and the auction for its Grand Champion—is probably the most anticipated event of the livestock show.

ANNOUNCER: The next up in our main arena is our Class 3 medium weight steers weighing in between 1198 lbs to 1270. We have 28 head in this class and we’re placing 9…

McCrumb and August are in this round, the first of many that will showcase hundreds of steers. The students, clad in blue jeans, boots and neatly tucked-in shirts, parade their steers into the arena.

ANNOUNCER: Thank you and here are your results…

At least $6,000 in feed and enough chores at the ag barn to fill a part time job culminated in a few minutes of showmanship in the arena of the world’s largest livestock show. August doesn’t make the cut.

But the day before, McCrumb and August competed in an exclusive show for the 103 calf scramble steers.

JUDGE TALKING: There’s no doubt this Class 3 offers us…

But the day before, McCrumb and August competed in an exclusive show for the 103 calf scramble steers. As the ABC steers line up for the final viewing the judge describes what sets the winner apart from the rest of the herd.

JUDGE TALKING: This calf that comes in in our top spot. His presence in the front in and the way the young lady gets him set up. He is a stand out…

MCCRUMB: Honestly, I didn’t realize I got first until he pointed to me. He, like points the number one to you. And it was very breath-taking and I actually started crying a little bit. And I got an H trophy which was, it’s pretty much been my dream for a very long time was to get an H trophy

August helped McCrumb realize her dream. Now she’s already dreaming of next year, her senior year, her last year to enter the Houston Livestock Show.  If a random steer won by drawing lots performed so well, McCrumb wonders what more could be accomplished with her hard work, accrued knowledge and a more intentional livestock selection.

MCCRUMB:  We’ve been looking at some steers and heifers. And I think I’m going to do one steer and one heifer. We’re going to do either one really good sheep or two sheep from my breeder. And then I graduate. [LAUGHS] Yes, this is the one that’s going to count.