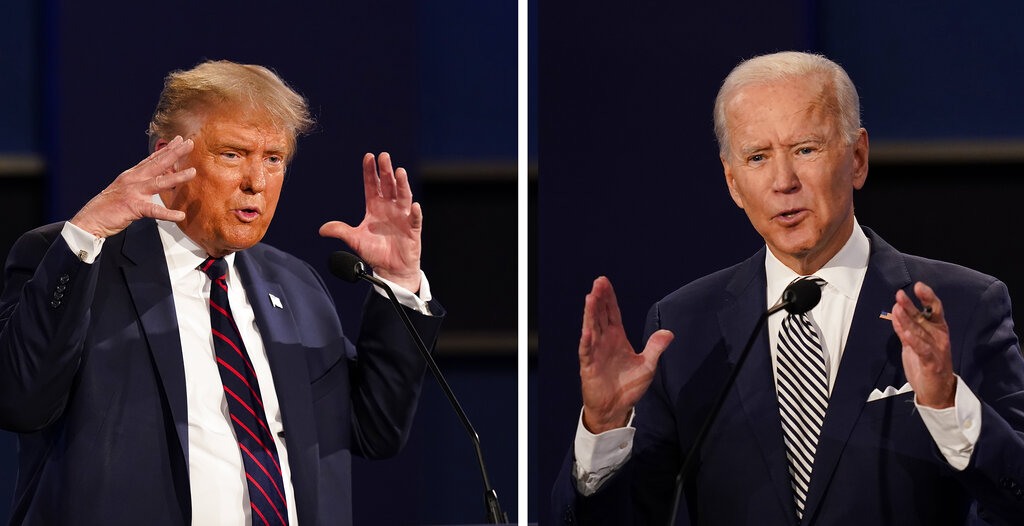 MARY REICHARD, HOST: It’s Tuesday the 20th of October, 2020. We’re so glad you’ve joined us today for The World and Everything in It. Good morning, I’m Mary Reichard.

MEGAN BASHAM, HOST: And I’m Megan Basham. First up, immigration and the election.

During the 2016 presidential election, nearly three-quarters of the country said immigration policy was a top issue. And that made it a main talking point for both Republicans and Democrats.

REICHARD: Four years later, just over half of voters say it’s a top issue. And none of the top candidates are talking about it on the campaign trail. WORLD’s Sarah Schweinsberg reports now on why that is.

TRUMP: We’re going to build the wall. We have no choice.

CLINTON: He is talking about deporting more than one-half of the 2.4 million farmworkers who help feed our country.

…and in the presidential debates.

TRUMP: We need strong borders. They’re coming in illegally. Drugs are pouring into the border.

There’s also been little talk of immigration on the final leg of the campaign trail.

Muzaffar Chishti is a senior fellow at the Migration Policy Institute. He says the coronavirus pandemic has pushed—and kept—other issues in the forefront.

CHISHTI: The healthcare concerns and the economic consequences of those health conditions have sort of upended everything. That’s the reason it has not gotten the salience as it did in 2016.

The pandemic has also led to another change: significantly fewer migrants arriving at the southern border. Last year, nearly a million people made the journey. This year, that number has dropped by half.

Travel and border restrictions have made it more difficult for migrants to journey north. And the Trump administration has sealed the southern border since March—immediately turning migrants around.

Theresa Brown is an immigration policy advisor at the Bipartisan Policy Center. She says fewer arrivals have made immigration issues less pressing.

BROWN: The issues of people arriving at the border have declined significantly in the national discourse. You don’t see as many national news stories about it primarily because there’s a lot fewer people trying to come across the border.

Even though it’s not top of voters’ minds, both President Trump and Joe Biden do have immigration policy platforms. So what can the country expect after November 3rd?

Theresa Brown says if President Trump wins a second term, he will build on the policies he implemented during the last four years.

That includes continued construction on the southern border wall. The president would also continue sending asylum seekers back to Mexico while awaiting asylum claim hearings. That’s instead of placing migrants in detention centers.

And he would enforce stricter requirements for legal immigrants and establish a merit-based system.

BROWN: If you want to understand what a second Trump term might look like for immigration, the best you can do is sort of look at what they have been doing, and think there’ll probably be more of the same.

Ali Noorani is the president of America Is Better, an immigration advocacy non-profit. He says President Trump is also likely to keep the number of refugees who can enter the country each year low.

NOORANI: I think we would continue to see drastic cuts to refugee resettlement numbers.

Democratic-challenger Joe Biden has promised to reverse the Trump administration’s policies and replace them with pro-immigrant ones.

He would halt border wall construction. He’d restore the DACA program that protects from deportation children brought to the country illegally by their parents. Biden would increase the number of employment-based green cards the government gives out. And he’d propose a pathway to citizenship for immigrants already in the country illegally.

Biden’s platform says he will protect people living in the country under Temporary Protective Status from being deported. And he would raise the number of refugees admitted.

The far-left wing of the Democratic party has advocated abolishing the Immigration and Customs Enforcement agency or ICE. Biden has not voiced support for that policy.

But Theresa Brown at the Bipartisan Policy Institute says so far Biden has been light on policy specifics.

BROWN: There’s a lot of outstanding questions about how this might work. There’s not a lot of detail about reforms to the legal immigration system, or employment based visas.

Some immigration advocates think the former vice president has missed an opportunity with voters—on the debate stage and the campaign trail—to discuss his pro-immigrant agenda.

But Migration Policy Institute’s Muzaffar Chishti says at this point, it’s not politically beneficial for either candidate to spend too much time talking on the subject.

President Trump must consider that voter support for immigrants has grown since 2016. Back then, four in 10 voters said immigrants are good for the country. Today, six in 10 agree. And a recent Gallup poll found that Americans want more immigration than less for the first time in half a century.

And while Democrats want immigration reform, they disagree over how far it should go.

CHISHTI: So they would rather avoid immigration as the subject, because then all these fissures within the Democratic Party would come out.

The final presidential debate is scheduled for Thursday. Theresa Brown and other analysts hope immigration policy will finally make an appearance.

BROWN: I think it’s important that the American people hear from the candidates there what I believe are very different views of immigration and what immigration policy should be.