The art and science of taxidermy

WORLD Radio - The art and science of taxidermy 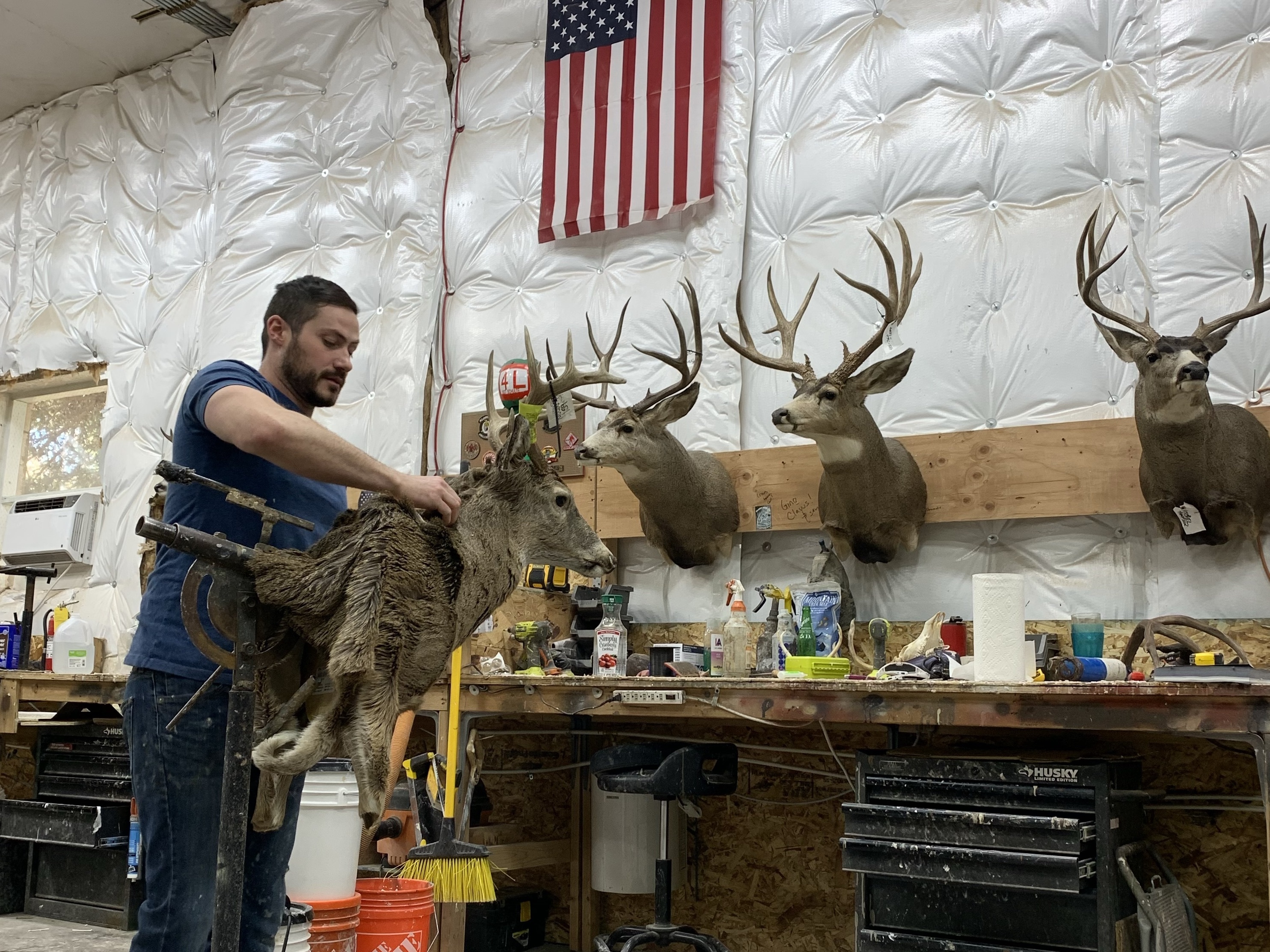 MEGAN BASHAM, HOST: And I’m Megan Basham. Coming next on The World and Everything in It: taxidermy.

Fall is open season. Over the coming weeks, many deer, elk, moose, turkey, pheasants, and ducks will literally find themselves in the crosshairs. Most will fill freezers, but a few will end up mounted on a mantle or hanging on a wall—thanks to the work of taxidermists. They’re equal parts artist and scientist.

WORLD’s Sarah Schweinsberg spent the day with a family in the business to find out what goes into their craft.

SARAH SCHWEINSBERG, REPORTER: The sharp odor of glues and chemicals fills the High Uintas Taxidermy shop. The walls are covered in elk, deer, and antelope heads from North America, Europe, and Africa.

Dean Schulte is putting the finishing touches on a life-size mountain lion.

DEAN SCHULTE: That mountain lion, you can see the muscles in his shoulder.

He’s using an airbrush to paint the last flecks of pink and black onto the lion’s nose. It’s golden back is arched as it prowls over rocks and charred logs.

DEAN SCHULTE: I painted the black in here to make it look like it was burnt.

Another mountain lion Schulte recently completed sneers at imaginary prey. Schulte used clay to sculpt each wrinkle and fold of the cat’s snarl. And then, he put the big cat’s skin over the clay.

DEAN SCHULTE: The snarl is very difficult to do. I pre-sculpt all that detail underneath of it and then shave the skin super, super thin. And then it takes me about a day of messing with it…

DEAN SCHULTE: This business, this is my 27th year.

It started as a hobby—he’s an engineer by training, but then one day…

DEAN SCHULTE: I says, Wow, this is I think my thing. And so I just started very aggressively pursuing it.

Today, his two sons are also aggressively pursuing the craft with him. Each year, hunters send the Schultes hundreds of animals from all over the world.

DOMINICK SCHULTE: This one’s a really nice deer. I’m excited to do it.

His older brother, Stephen, is crafting a similar mount.

STEPHEN SCHULTE: They wanted to do something where they could display it. So I’m cleaning it up.

Each of the Schultes say mounting the animal is their favorite part of the process. But it’s also the shortest step. There’s up to nine months of preparation to get to this point.

Stephen Schulte says when a hunter drops off an animal, it has to be skinned…

STEPHEN SCHULTE: So after we get it skinned and everything we salt it…

STEPHEN SCHULTE: They dry for about a week.

Then sent to a tanner. That’s a person who turns an animal hide into leather.

STEPHEN SCHULTE: Their turnaround time is about five months.

When the tanner sends the skin back, it’s dry and stiff. In order to work with it, it needs to be soft and flexible. So Stephen Schulte soaks it in warm saltwater.

STEPHEN SCHULTE: By rehydrating them, we get the stretch back out of them.

But it’s still a bit damp…

…so he uses a blow dryer to finish drying it. Now, it’s ready to be stretched onto a deer mannequin made of a lightweight, hard foam. Stephen has already made sure this one is the same size of the original deer.

And attaches them onto the deer form using a drill. They have to go on at the perfect angle, not sitting too far back or forward.

Dad, Dean Schulte, says details like that are what bring a taxidermied animal to life. And that takes intimate knowledge of an animal’s anatomy.

He points back to his big cat. A mountain lion always keeps its head at an angle.

DEAN SCHULTE: A cat, they carry their head at a 45. So he’s looking this way.

Their head is tilted even when they’re looking straight ahead. That affects the way a mountain lion’s pupils sit.

DEAN SCHULTE: You’re always going to notice their pupils are not in the center because their head is angled down.

So Dean Schulte is careful to place the synthetic eyes in the exact right place.

DEAN SCHULTE: And so one way I’ll be able to pick improperly done cats is that they’ll have that eye pupil roll to the center. Those are just little things that you got to pay attention to with carnivores…

After he puts the eyes in and antlers on, Stephen Schulte slathers the mannequin in glue and pulls the skin over the head.

STEPHEN SCHULTE: So the skin gets put on just like that as you saw.

If he’s done all the prep work correctly, the skin should fit like a glove.

STEPHEN SCHULTE: There’s times when you test fit it and you’re like, it fits great. Sometimes it’s not fitting and then that can be stressful…

This skin fits well. Stephen grabs a thick needle, dark thread, and sews up cuts in the deer’s hide.

This is one reason the family loves this job: It takes so many different skills. And Dominick Schults says it’s fun to put those skills to use for the family business.

DOMINICK: You’re working for your family. So you know the family name, not just the business name goes into it.

Now that the skin is sewn up, Stephen staples the ends to the back of the mannequin mount. He doesn’t want the skin to come loose.

STEPHEN SCHULTE: What happens if the client one day is moving it and sees a gap. That just looks trashy.

Over the next week, Stephen will do more detailed work. He’ll paint the nose and make sure the skin doesn’t wrinkle. Then, this deer will finally head home to its hunter.

AUDIO: [How are you guys doing?]

Speaking of hunters, customer Scott Tawzer stops by to pick up his elk head. He and his son shot it last year. He says he got it mounted because he’s proud of the animal and he wants to remember the moments with his son.

TAWZER: It really is just so much about the memory. He and I got to go out together. We all just love the fact that we can look at that and go oh, yeah, I remember that whole experience.