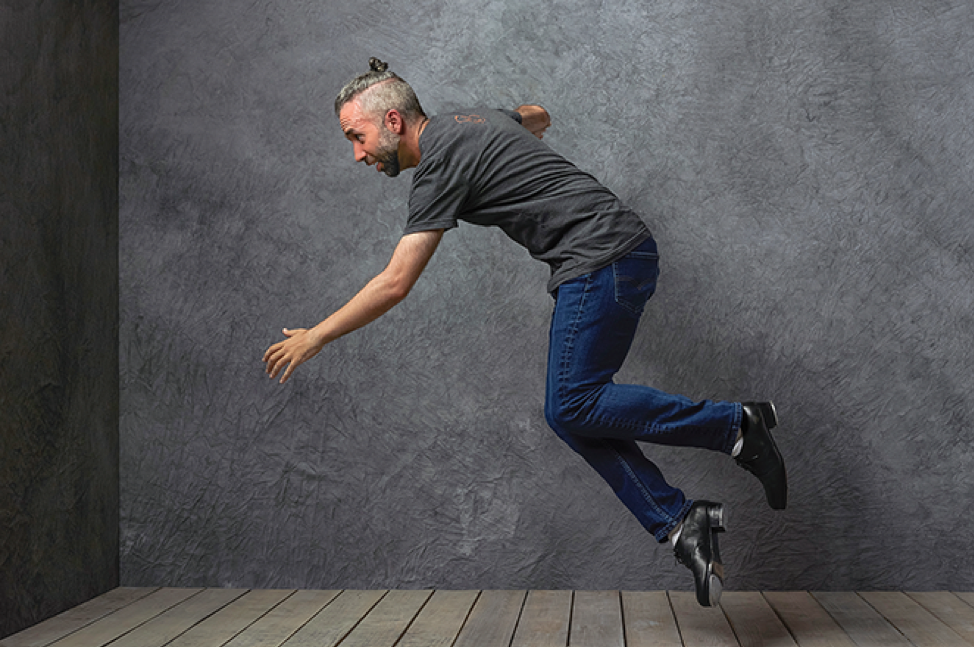 MARY REICHARD, HOST: And I’m Mary Reichard. Coming next on The World and Everything in It:  a tap dancer in New York City.

Tap dancing originated in the United States in the 1800s as a fusion of African, Irish, Scottish and English-American dance steps. But it wasn’t until the 1920s when performers began nailing metal “taps” onto the soles of shoes to create what we know as modern tap dancing.

BASHAM: Tap’s popularity waned in the mid-1900s as audiences became more interested in other forms of music—like rock n’roll. But tap is now experiencing a resurgence.

WORLD Radio’s Sarah Schweinsberg met up with one of the top tap dancers in the world in New York—and he’s using his skills for a higher purpose.

In another studio room, it’s 38-year-old Andrew Nemr’s chance to add to the noise: He’s a professional tap dancer.

NEMR: I started tap dancing when I was 3-and-a-half years old.

Nemr sits down on a piano bench and opens his backpack. He slides out a worn pair of what look like regular black dress shoes. But these unassuming shoes are his instrument.

Nemr laces his shoes and stands to demonstrate a foundational step that has four movements.

NEMR: First one is a dig, just the bottom, like the back edge of your heel.

NEMR: So you could do things like, say two paddles in one role, you end up with the six note pattern instead of a four note pattern, or you could do a paddle role and a role because you have a different six-note pattern.

Nemr is the only child of Lebanese immigrants. Growing up in the Washington, D.C., area, his parents wanted a place for him to spend time with other children. They lived near a dance school…

NEMR: So they asked me if I would go and watch a class and see if I liked it. And we all went, and I watched the class, and that was the beginning.

Nemr’s been a professional since age 10. He went onto study under tap legends and started his own dance company in his 20s.

NEMR: I think the thing that kept me from burning out, especially with regards to tap dancing was the depth of the craft work.

Today, Nemr spends months of the year traveling, but when he’s in New York City he rehearses in this simple 10 by 10 studio.

NEMR: When I’m in town, yeah, this is, this is pretty much the place.

Although he grew up in a Christian home, it wasn’t till his 20s that Nemr became serious about his Christian faith. Since then he uses his tap to point audiences to the Creator of creativity. Nemr recently performed alongside Keith and Kristyn Getty as a percussive instrument. He’s even preached a sermon while tapping.

Nemr says the temptations to pursue fame, prestige, and ever-more success are always present in the entertainment world. But he says Christian artists have a much higher calling.

NEMR: So the idea of quote-unquote “success and performance” is not something that I pray for, right? I pray to be used and that’s, that’s it.

One of Nemr’s specialities is improvisation—or performing without a pre-planned routine. Of course going on stage in front of an audience without a pre-choreographed routine is daunting.

NEMR: You can’t guarantee that what you did the last time you’re going to do again. And that’s very scary as an artist who has a relationship with their audience and their audience has an expectation of something.

But Nemr says improv forces him to be sensitive to the Holy Spirit’s leading as he dances.

Nemr demonstrates how he improvises. On his phone, he selects a song whose lyrics are about the need to pursue healing. He stands for a moment with his eyes closed—listening—his neck relaxed… and then slowly…

AUDIO: [Sound of tapping and music]

Nemr juggles a lot of projects. He runs his dance company…. And now also leads the Vancouver Tap Dance Society in Canada. But in recent years, Nemr has discovered that tap dancing isn’t his only artform.

NEMR: Tap dancing is just one form of expression. It’s not the only way to express emotion or truth…

Today, Nemr is writing a book of poetry. He’s a sought after instructor and speaker. He’s also a popular performer with other artists, dancers, and musicians. In 2016, at a TED event he shared a stage with percussionist and dulcimer player Max ZT, demonstrating their collaborative art:

Nemr says even as his projects have enjoyed success… ultimately they will only make a lasting impact if he keeps Christ at the center.

NEMR: So it’s more important for me to make sure that—like to continually double-check that the things that you know come out of my hand are going to be beneficial. Like they point in the right direction.