One man’s life-long fascination with the steam engine 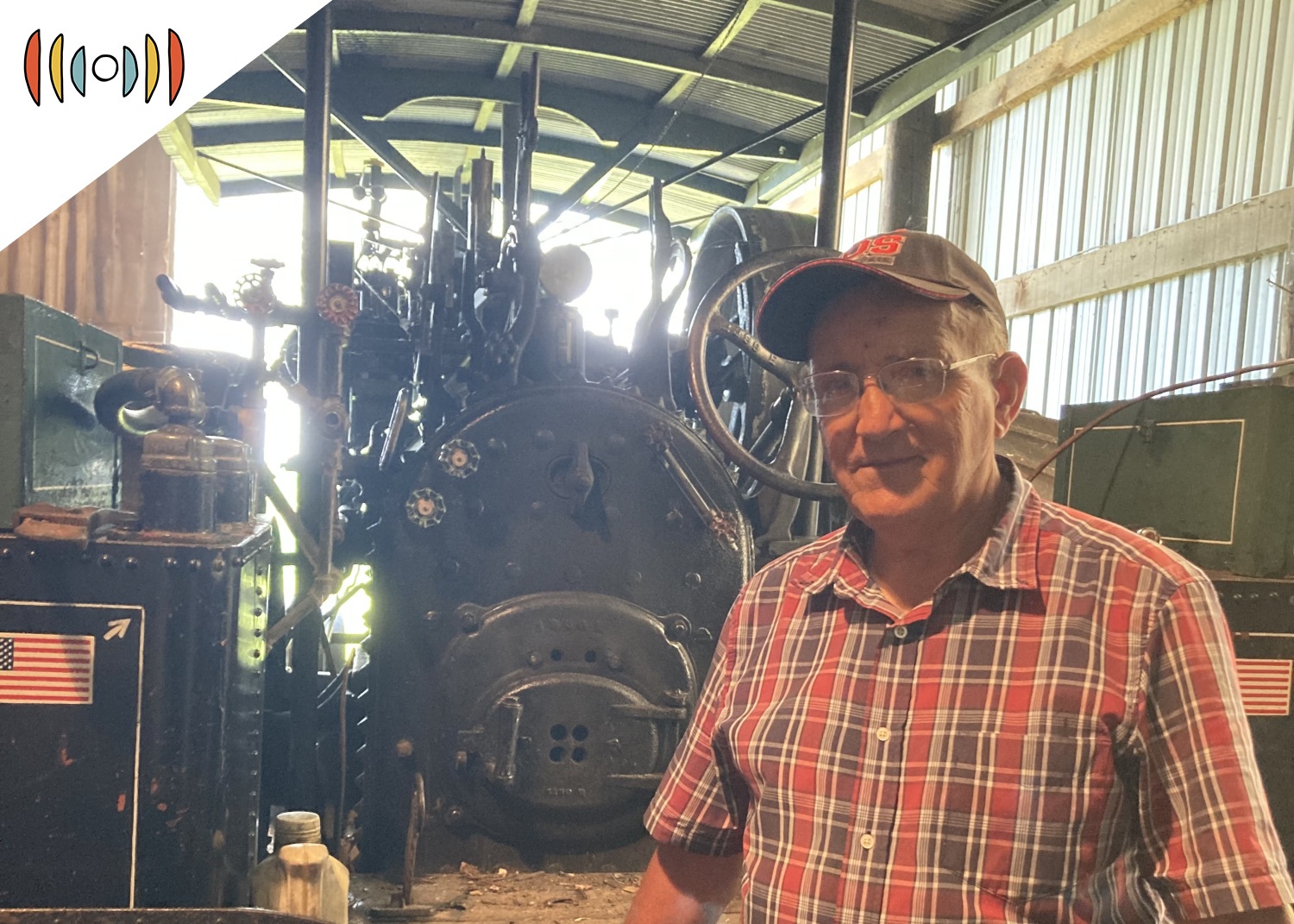 PAUL BUTLER, HOST: And I’m Paul Butler. Coming next on The World and Everything in It: connecting with the past.

Technological progress has improved efficiency just about everywhere, including train travel and farming. But efficiency isn’t everything. One man in North Central Illinois says the old ways still have a lot to teach us.

JOSH SCHUMACHER, INTERN: This steam whistle isn't on a train. It's actually from a tractor—a tractor in North Central Illinois. That tractor belongs to Neal Drummer.

SCHUMACHER: How old are you?

Drummer may be the most youthful octogenarian you’ll ever meet. He’s lively and enthusiastic—and it probably has something to do with the fact that he hangs out with something older than he is.

SCHUMACHER: So, what is this right here?

DRUMMER: Oh, it's a 1920 Port Huron steam traction engine. The word tractor comes from that expression.

These Port Huron steam engine tractors were used primarily for farming. Everything from plowing, threshing grain, cutting wood, and baling hay. The steam can be diverted to boil corn, steam mushrooms, and even help mix asphalt—all activities this tractor has participated in over the course of its hundred-year life.

SCHUMACHER: How long have you been doing this?

DRUMMER: Well, in a sense, ever since the day I was born. I was being born in the house when they were out in the yard with one of these engines threshing grain. And I got my first whiff of cold smoke through the open window...I tell people that.

When Drummer was a boy, his family farm had a steam engine just like this one.

DRUMMER: And of course the steam engine itself is just to me was a source of fascination from the time I was able to walk, scared to death of it, but I couldn't stay away from it either. At that time it was rather overwhelming to little guys.

Neal Drummer lived through the transition from steam power to diesel—both on the farm and along the tracks. Diesel might be more efficient, but the new engines lack the romance of steam. Drummer mourns the loss.

As a child, he used to ride around in the caboose of those steam trains to the neighboring towns with his friends. The engineers let the boys explore the steam engine whenever they ran off to grab a bite to eat. That’s when Drummer discovered what he wanted to be when he grew up: a train engineer on one of those steam engines. But when steam power largely disappeared from the railroads during the 1950s, so did that dream.

However, in 1971, Drummer found a new outlet for his love of steam engines: a 19-horse Port Huron steam tractor for sale in Ewing, Missouri.

DRUMMER: Got to bring the engine home, got to take the plunge. It was $3,000 at that time which was a chunk of change for me at that point.

Drummer bought it, and he’s never looked back. In fact, it’s become a part of his family. He’s got photos of it in his house. And he speaks of it affectionately. He insists the tractor isn’t just a lifeless “object.”

DRUMMER: They're almost like they're alive when they're fired up, they wake up, and they go to sleep. And, and even when they're sitting still, and they’ve got a full head of steam, you may think it's just a dead piece of equipment, but it isn't. It's wide awake even when it’s not moving or making any sound.

And that sense that they’re alive doesn’t end there.

DRUMMER: Almost, and they don’t call them iron horse for nothing. There's no two are exactly alike in the way they feel, when you get used to them, which is one of the characteristics of a horse. And a few other things.

Like horses, steam engines require more care the older they get.

DRUMMER: The firebox, most of it is original stuff. And, it’s got to have some work done on the bottom, sometime in the next couple of years…

Drummer’s been refurbishing and restoring this tractor for about 50 years now. It’s hard work, and he has the scars to prove it.

DRUMMER: You get scarred up and burnt and everything else. I learned that hard way.

SCHUMACHER: Yeah? What's the story there?

DRUMMER: Just things that you touch, or you get splinters your hands handling all this stuff and things like that. Or hit the side of the door and then it jams your hands. Yeah, that’s always fun.

DRUMMER: I smashed my finger, putting the grates in. Oh, that did hurt! And that finger there has been like that ever since it's been so I did some damage. Things like this. But that was not the fault of the engine that was my own. But right then I was gonna junk this steam engine, get rid of this thing, enough is enough. [laughter] You say lots of things.

DRUMMER: Well you wouldn't want to record it. A couple of things. Yeah. “You dirty, rotten, low-down…” and some other things.

Drummer’s hands are one of the few things that do betray his age. They shake as he plays the organ—which he does for his church every Sunday. And he has a hard time writing with a pen. Beyond that, he insists they're fine. His firm handshake is proof enough.

AUDIO: SOUNDS FROM THE THRESHER EVENT

The 84 year old Drummer stays busy all summer long. He says it’s a tiring and expensive hobby, but he sees the tractor as a means to an end. It’s about connecting with our past, and with each other:

AUDIO: DRUMMER TALKING WITH PEOPLE AROUND THE ENGINE

BUTLER: This weekend Neal Drummer is in Iowa, displaying his tractor at a steam event as he celebrates his 85th birthday.

Here in central Missouri, we still have a few of the steam tractors. They regularly show up at community events to demonstrate threshing, and, of course, blow their whistles. We have many horse an buggy congregations who are farmers. One such farmer, whose farm borders our church property, also has an “iron horse”. It is a small steam train which pulls about twenty people around an extensive layout of tracks, with trestles and tunnels. Our Vacation Bible School used trains as the theme, so they arranged for the kids to ride in, get soot in their hair, and smell the delights of coal trains.

I agree with Mr. Drummer about steam engines. I'm 72, old enough to remember seeing them. Even though they smoked, etc., they had a presence that diesel engines lack.

For the curious, Buster Keaton's masterpiece, "The General" is an excellent introduction to steam engines, as well as to a genius filmmaker.