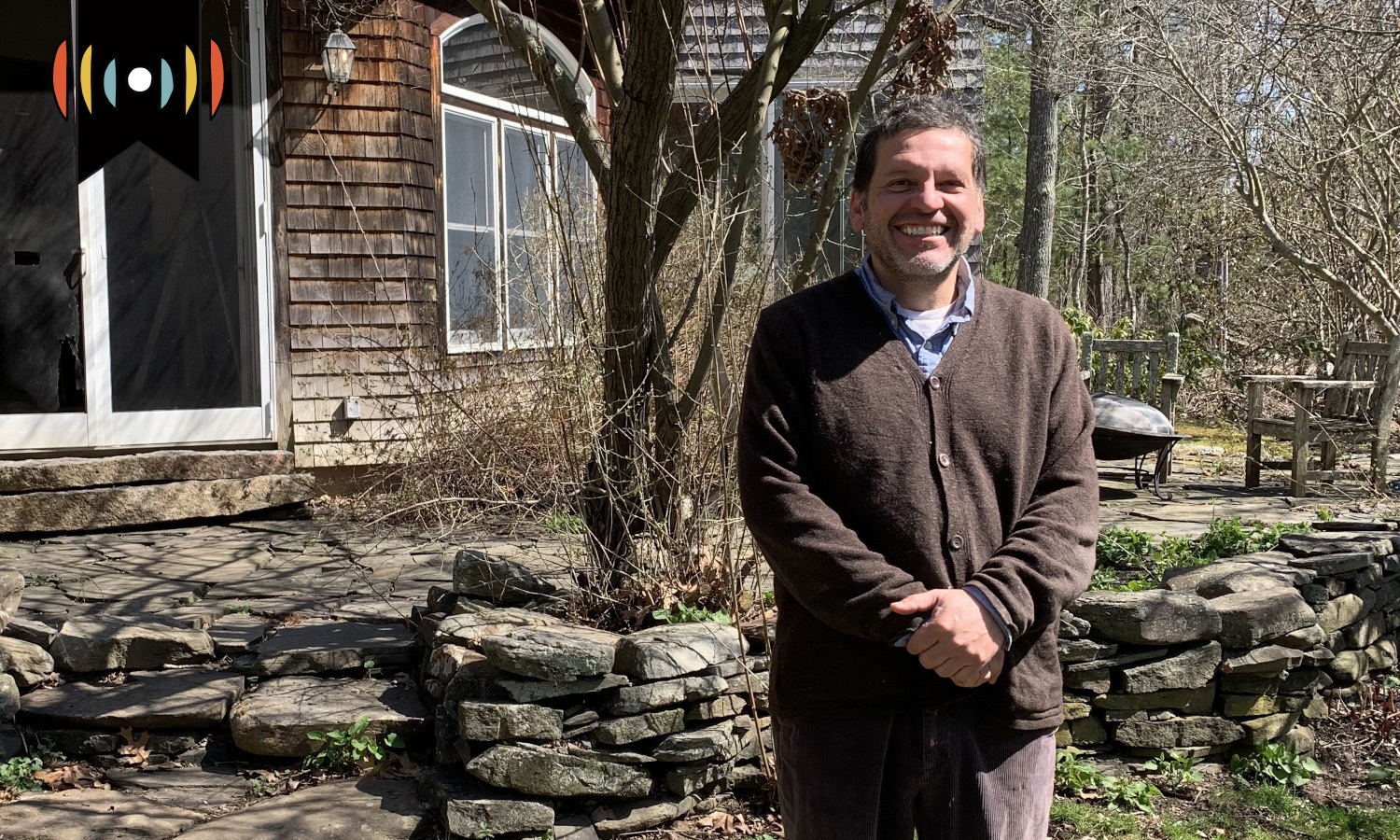 And lots of people on the sidelines in support.

It was a similar scene nine years ago. But about five hours into that race it came to a sudden end—as two bombs went off near the finish line.

BROWN: Before this year’s marathon WORLD reporter Jenny Rough visited the Boston Marathon Marker Memorial—honoring those killed. And she talked with the artist who designed it.

EDUARDO: I remember watching the news. I remember being scared. I remember the whole city became paralyzed and the manhunt started.

It was Marathon Monday in Boston. At 2:49 p.m., a bomb exploded in a crowded spectator viewing area near the final stretch on Boylston Street. Thirteen seconds later, a second bomb exploded. Three spectators were killed. Seventeen people lost limbs. Others lost hearing or were left with other life-altering injuries. Two police officers also died from wounds related to the attacks.

In the aftermath, the community grieved. A few years later, after some of the shock and disbelief had settled, the City of Boston decided to commemorate the victims. Sculptor Pablo Eduardo got a call.

EDUARDO: We were invited to participate in a competition. That’s a lot of times how we get our work.

He knew right away he wanted to submit an idea. Born in Bolivia, Eduardo came to the States when he was 12. He earned a degree in fine arts at Tufts University and has since done a lot of work for Boston College. The city is close to his heart.

Bronze is technically a mix of metals that is easy to weld, mold, pour, and hammer. It doesn’t corrode. 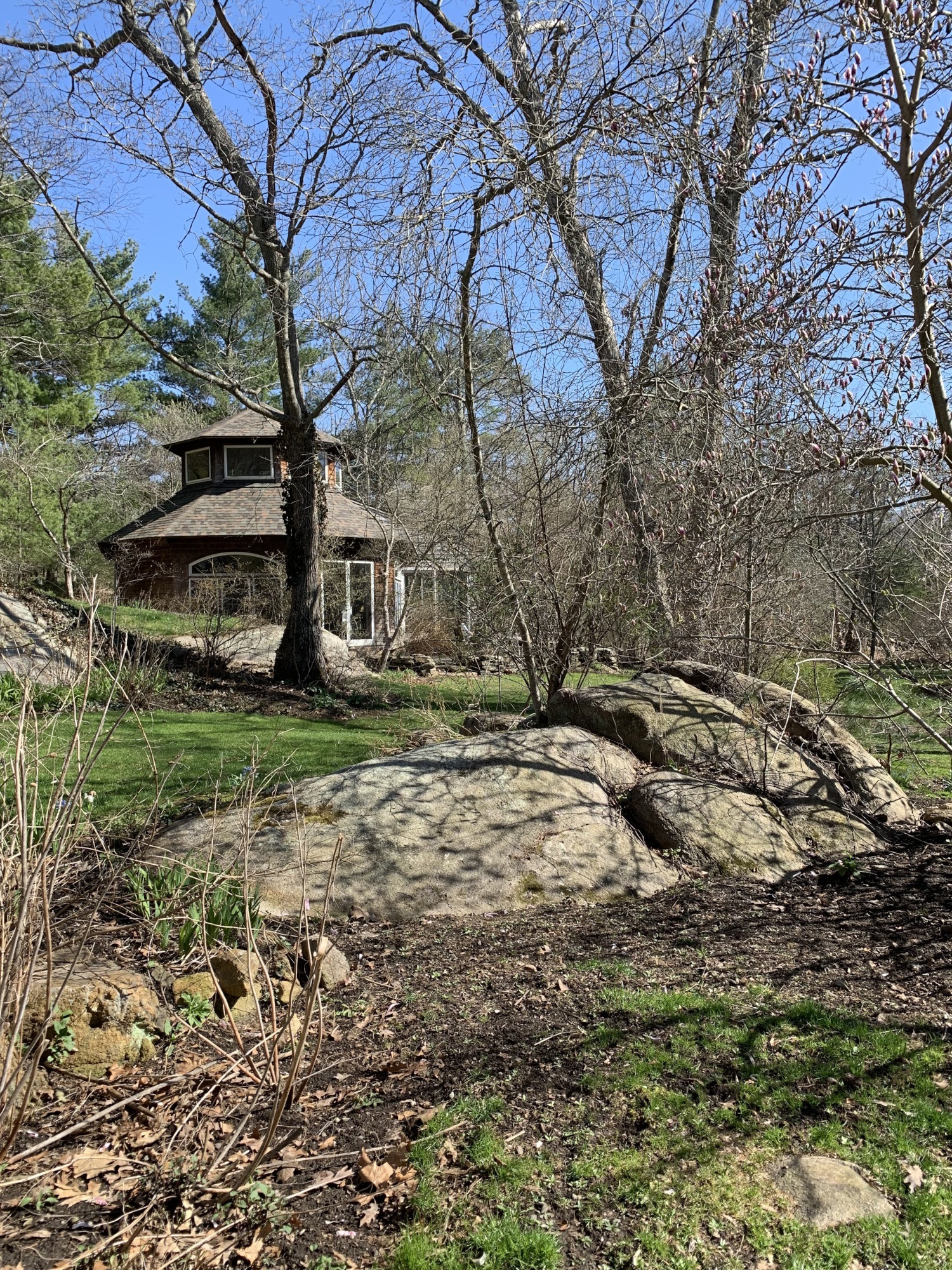 Today, Eduardo lives just north of Boston in Gloucester on a beautiful property with gardens, a pond, dogs, chickens and two design studios. A clean studio where the process begins, ideas take shape. And a dirty studio where the sculpting work takes place. 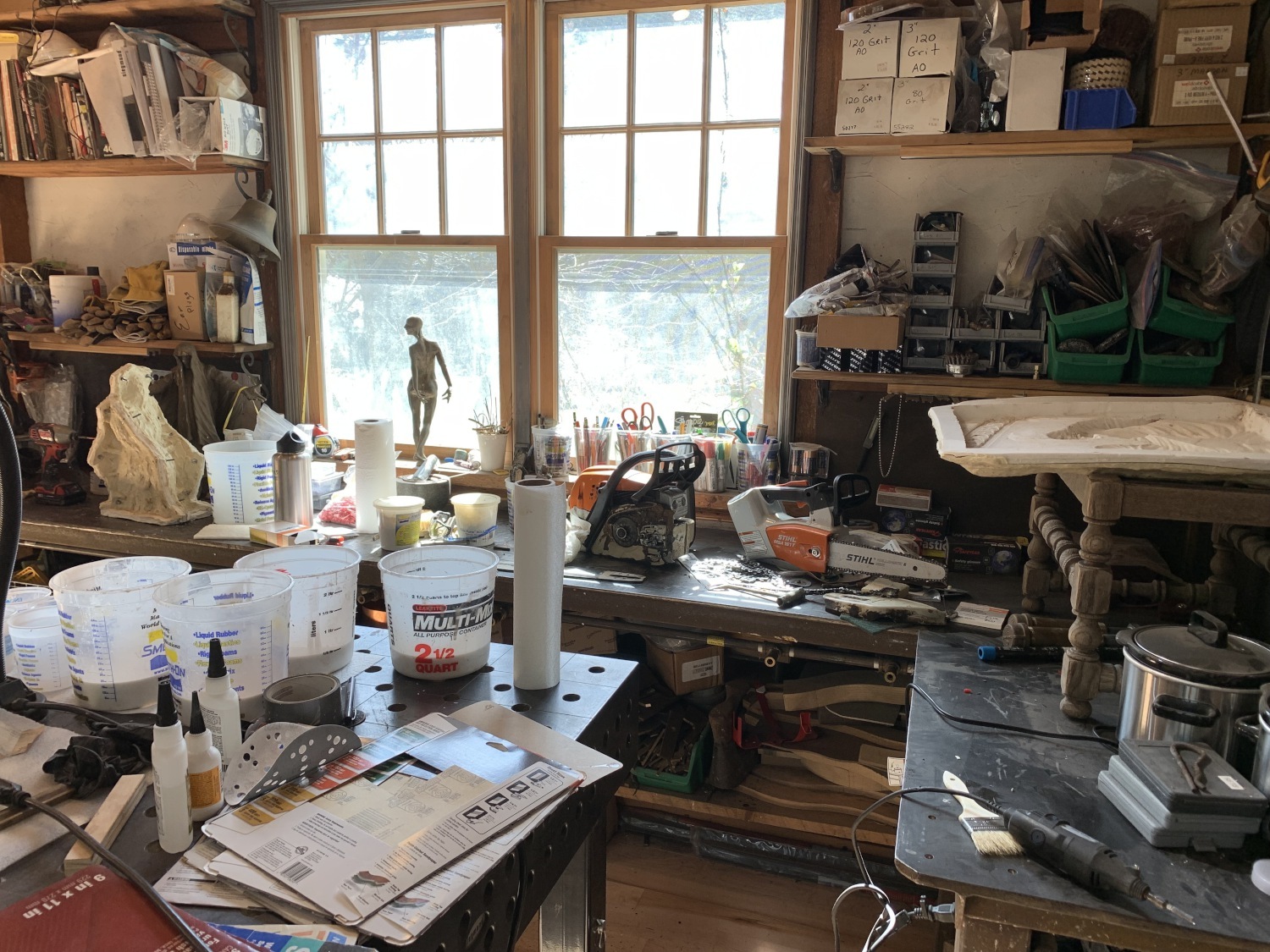 Eduardo’s work tends to focus on sculptures of faith-based and historical figures. They mark a triumph or something great. Not the case this time.

The bombings had changed Boston. And he wanted the markers to reflect that reality.

EDUARDO: It was to bump out the street. We took out four parking spaces per site. Because they are twin memorials.

So he proposed altering the path of the sidewalk by curving it out into the street. He also wanted to incorporate light into the design. Maybe a figure holding a beacon.

Eduardo’s idea was chosen among a handful of artists who submitted proposals. The final design differed from his initial concept: The altered sidewalks remained but he eliminated the figure. The burning question was how to incorporate light?

The victim’s families met with Eduardo to give their suggestions. They gathered numerous times, often in a parish house at a Boston church. He says there were a lot of tears at those meetings. Eduardo recalls the families struggled with how to make sense of what happened and why. And how could Eduardo capture such struggle and circumstance in a thoughtful, appropriate way?

EDUARDO: The families were clearly - and probably still are - very hurt with the whole ordeal.

The families debated: Should the memorial markers focus on running in some way? Many runners were injured, but none were killed. Should it include the phrase Boston Strong? Some wanted the motto; others did not. All the families had to be on board with the same design. To complicate matters, the arts committee had strong opinions too. When the conversation got strained, a religious leader from the community stepped in to help.

EDUARDO: There was a priest, Father Unni, from Back Bay, who was a mediator in a spiritual way between the families and the city and us. Because sometimes it got pretty tense. He was fantastic because he guided the whole process into a spiritual thing. I mean, sometimes he got to the point where he had to say, “Let’s everybody pray!”

Eduardo says Unni prayed specifically that God would enlighten them with a design. And Eduardo believes God answered that prayer. The final design included four lamps in each spot. Hand casted glass spires with a lace of bronze around each one. Here, WBZ-TV-Boston describes them:

NEWS REPORTER: These twisting structures will rise from each site, bronze on the outside for strength, glass on the inside for fragility. 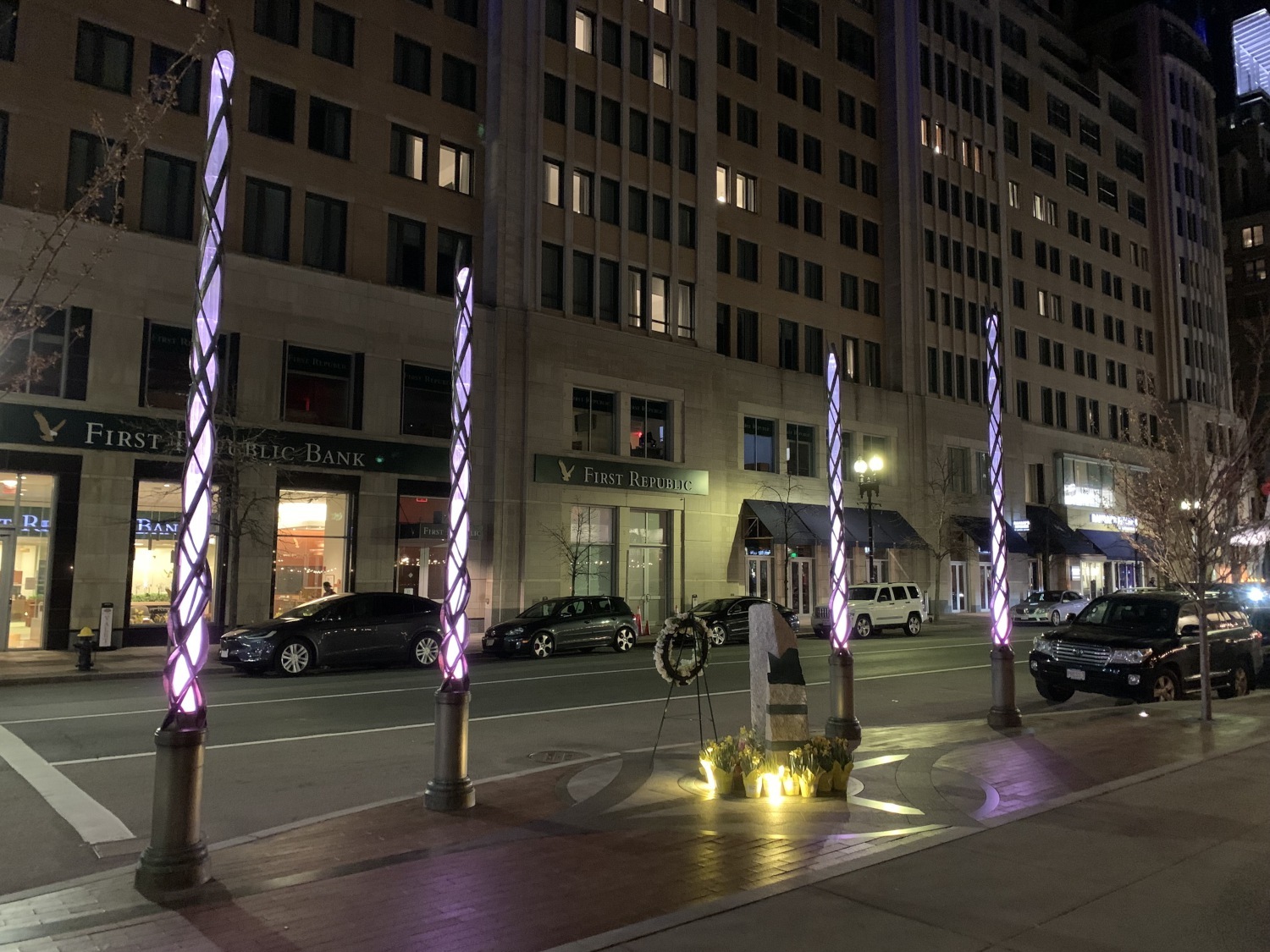 The memorial Photo by Jenny Rough

Three granite stones represent the spectators killed: 29-year-old Krystle Campbell, 23-year-old Lingzi Lu, and 8-year-old Martin Richard. Each stone came from a place special to the victims. The stones are separated, one in one site, two in the other. Yet fit together like a puzzle.

EDUARDO: There are three stones that are supposed to be twisted together because the event kind of bonded them forever.

The families put capsules inside the stones with personal effects. Out of respect, Eduardo didn’t look inside the boxes to see what items the families selected.

A brick foundation serves as the groundwork and includes two bronze stones that hold the badges of the officers who died: Sean Collier and Dennis Simmonds.

In the end, a community of artists contributed. Including a glass artist, architects, masons, and one of Eduardo’s assistants who works with lettering.

Finally, Eduardo wanted the markers to show that violence had occurred, yet do so in a non-violent way. He decided to use a strong material: black granite. The black is incorporated into the brick foundation in the shape of a diamond. 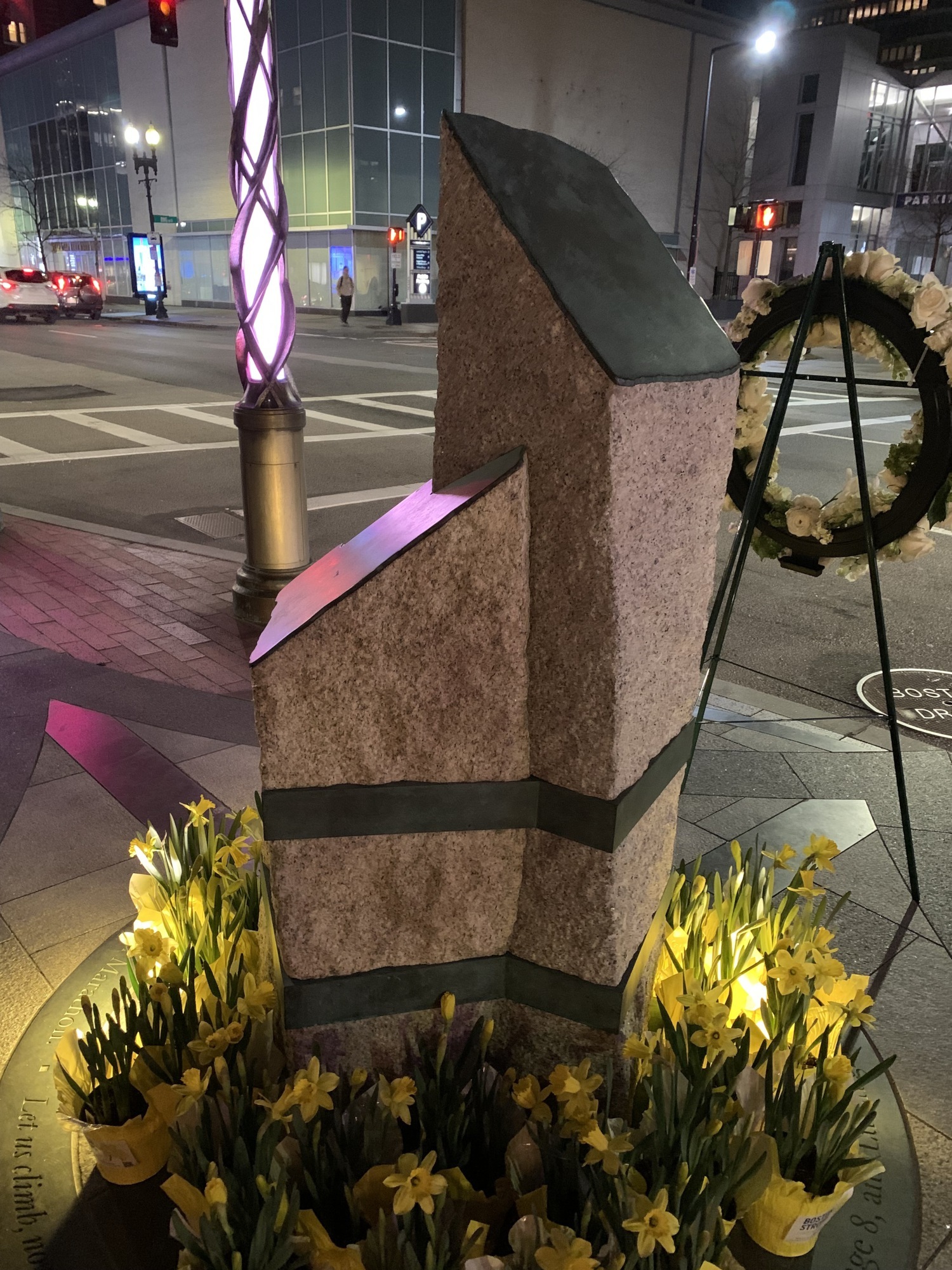 EDUARDO: It’s a gentle design, above all because I think that’s what the families needed and the community needed. It’s very gentle. It’s small, it’s humble. There is a strength in the humbleness.

Two nights before this past Monday’s race, the city buzzed with preparation. The newly painted finish line glowed, barriers lined the route. Race committee workers and volunteers dotted the sidewalk, easy to spot in their bright blue and yellow jackets. Runners and their families took photos in front of the large clock counting down the hours to the start. And among the commotion, the glass and bronze spires illuminated the memorial markers on Boylston Street, lights shining in the darkness.