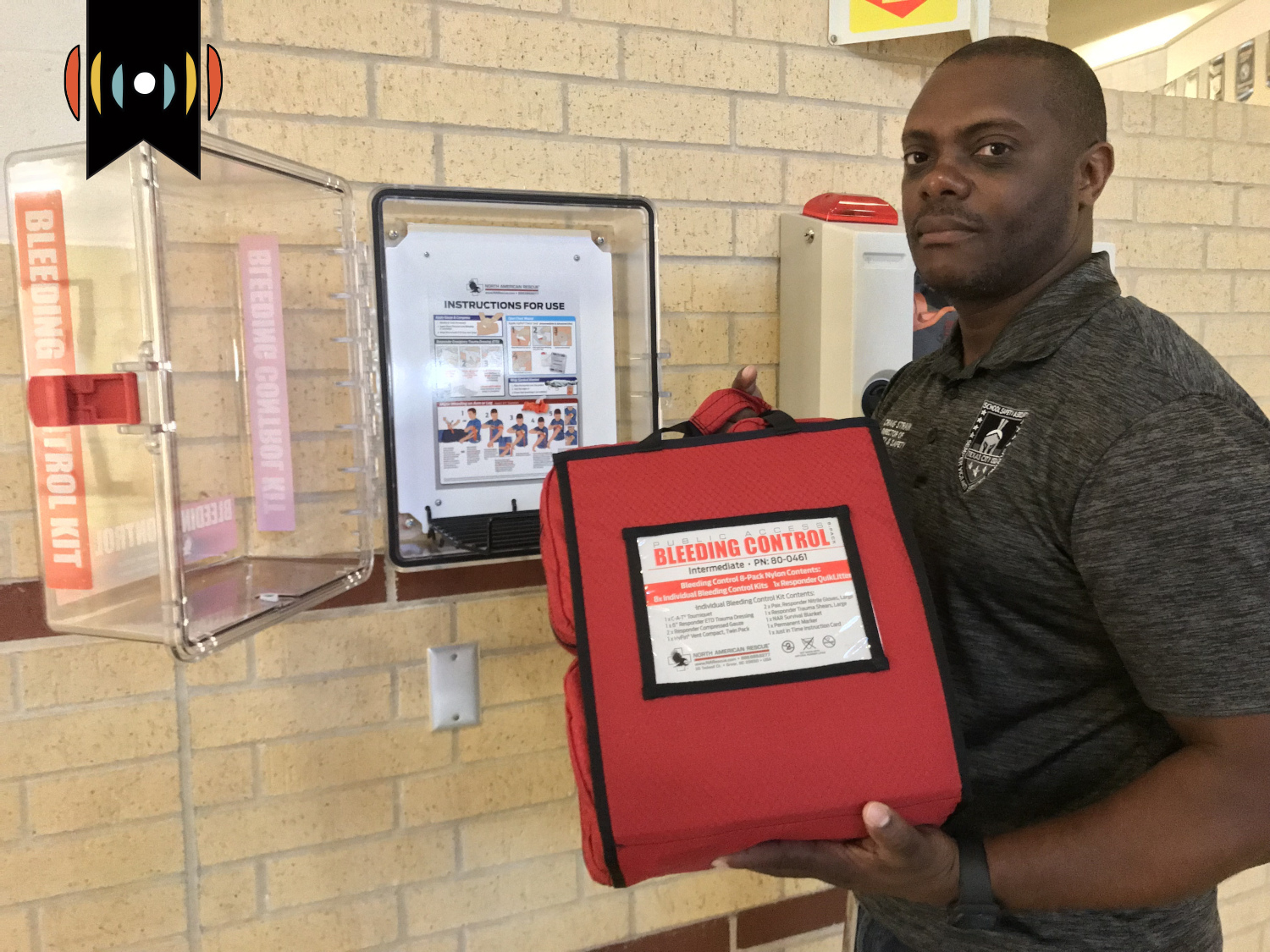 BUTLER: On local campuses across the nation, security administrators have once again had to make a sobering assessment of their own security protocols—always with the question, will it work? WORLD Reporter Bonnie Pritchett brings this report.

BONNIE PRITCHETT, REPORTER: Texas City is about 20 miles from Santa Fe High School, the site of a 2018 shooting that left eight students and two substitute teachers dead. Craig Straw is director of security for the Texas City Independent School District.

Straw walked up to a clear plastic box mounted on the wall of the Texas City High School cafeteria. It’s a bleeding control kit. After the deadly shooting in Santa Fe, every Texas public school is now required to have them.

STRAW: So, inside of here you've got a tourniquet, you've got chest seals, you've got gloves, you've got everything that you need. There's even a stretcher to be able to pull the person out of the building…

Every school shooting forces Straw to reevaluate his security procedures.

STRAW: And I sit with my local law enforcement. Will this work? Their answer is ‘Yes. And no.’ The answer is 'yes' if the shooter follows the exact plan as we laid it out. But if he doesn't come through the front door, and he comes to the side door, and we plan for him to come to the front door, everything changed. Now we go into problem solving mode…

How Straw and school security teams across the nation assess their protocols sometimes depends on what state and federal lawmakers dictate. The National Governors Association convened earlier this month to develop plans to stop mass shootings. Democrats called for gun control measures while Republicans wanted to beef up school security.

STRAW: Under the new letter that Governor Abbott just released post Uvalde, he's tasked all the school districts in the state of Texas to go back and check their doors and their locks…

The Uvalde investigation revealed an exterior door failed to automatically lock once it closed. The shooter used that door to enter the building.

Richard Marianos investigated the 1998 deadly rampage at Columbine High School that gave rise to the term “mass school shooting.” He’s retired from the Bureau of Alcohol, Tobacco, Firearms and Explosives and teaches a graduate program on applied intelligence at Georgetown University. He’s also a consultant for a security management company.

The Columbine shooting was unprecedented for all law enforcement agencies. The investigation taught some hard lessons.

MARIANOS: And it was probably the first time that we really had to take a serious look about creating hardened targets surrounding our school system.

In recent years, school safety protocols have incorporated artificial intelligence —with mixed reviews. School employees can comb through a student’s records like attendance and disciplinary referrals and even open source social media platforms. That information can sometimes reveal a student who could become a violent threat. An AI program can gather that information a lot faster and more effectively.

MARIANOS: What are some of the preemptive things that go on with a shooter? What are some of the issues that have been continuously demonstrated in some of these arenas? And then be able to dive into the school system, to other work and see if any of these things come up? And then, you know, maybe contact the parents sit down, get individual counseling. But it has to be precipitated on reasonable suspicion. We don't want cops going out on fishing expeditions…

Some parents and students are pushing back against suspected fishing expeditions. Marianos said school administrators fear lawsuits for acting—or not acting—on the data they collect.

Others have suggested arming teachers and staff to stop school shooters. According to the National Conference of State Legislators, about 30 states allow teachers or other school staff to carry firearms on campus. Most of those statutes require the districts’ approval to do so. And staff participation is voluntary.

Most school districts choose to leave the armed security to locally contracted law enforcement who patrol campuses. Some districts, like the Uvalde Independent School District, have their own police departments. Straw and Marianos said those officers have become an integral part of campus life. That’s why recent calls to defund the police are especially frustrating for Marianos.

MARIANOS: I think that where that is completely false, fallen short, and part of their rally cry is, well, we're just a little bit intimidated by having cops with guns in our schools. Well, you know what? A school resource officer can be one of the biggest deterrents there can be for this type of violence, because it's going to make people second guess…

He said a school resource officers’ best defense against school violence isn’t necessarily his gun. A good relationship with the students and teachers builds trust. And with trust comes candid conversations about students in need of attention.

MARIANOS: And again, by people in the schools identifying at risk individuals or being able to communicate with this generation, and have honest conversations of, ‘Hey, who's having some problems?’ Or, ‘Why is this individual constantly bullied, or what is going on here’…

Craig Straw agreed. He’s concerned that most students’ “social engagement” is done through a tiny screen.

STRAW: But we've got to get them back to basic human interaction. A lot of teachers in our district, they step out in the hallways when the kids come in, ‘Hey, how you doing Craig? Welcome in today.’ And they, just every day, they look you in the eyes, and they talk to you. And they kind of get an idea of whether or not you're here today to learn or whether you're having a problem. And if you don't look like you're here to learn, those teachers, ‘Hey, Craig, can I see you at the end of the day? Is everything okay? Do you need something? There's a counselor. If you need something, you know, I can get you any help you want. I'll go, I'll sit with you. You don't have to do it alone.’