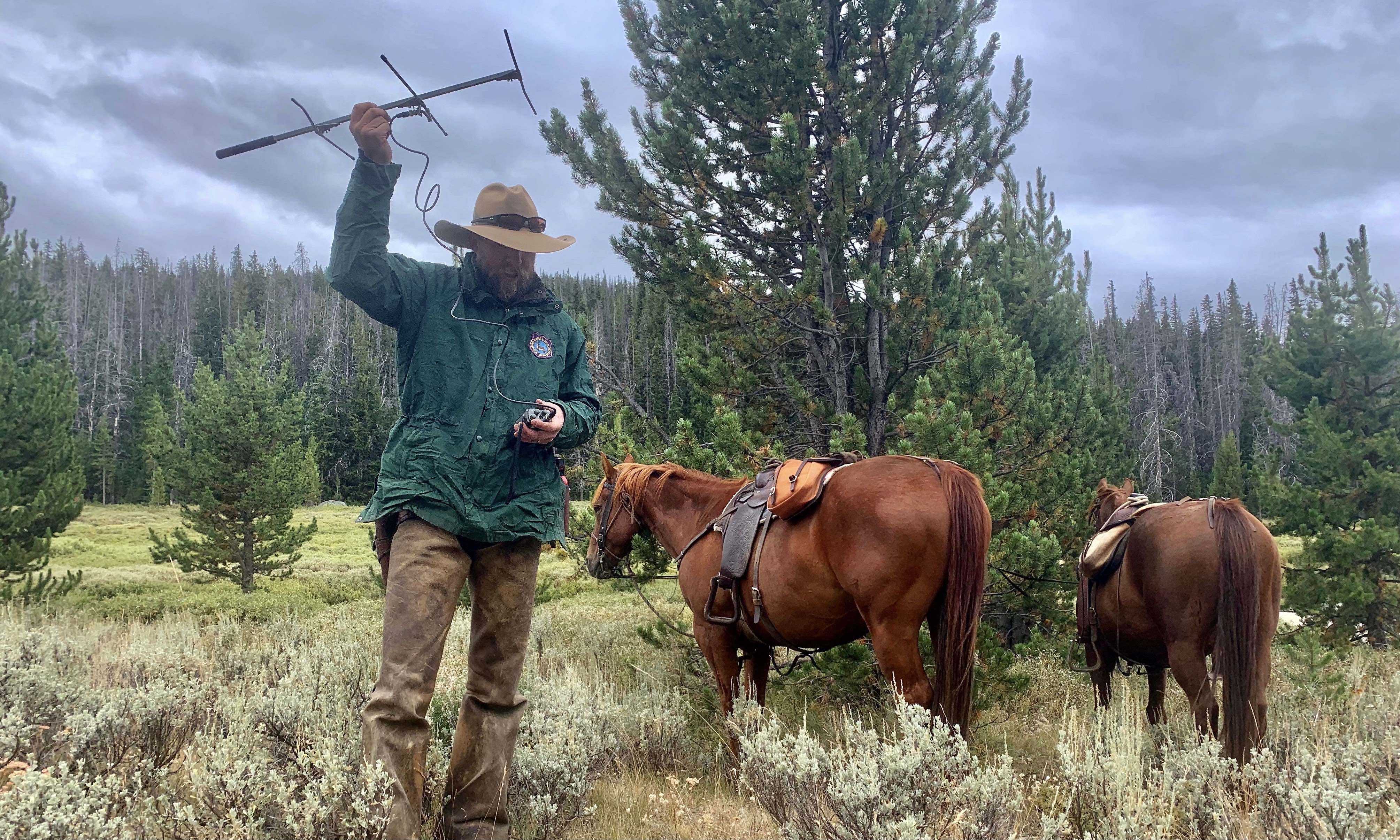 MARY REICHARD, HOST: And I’m Mary Reichard. Coming next on The World and Everything in It: Our occasional series, What Do People Do All Day.

In the 1970s, Congress passed the Endangered Species Act. Among the species the law protected were wolves. They’d nearly disappeared from the United States by that time.

Half a century later, the wolves are back. They’ve rebounded across the country.

EICHER: WORLD’s Sarah Schweinsberg spent a day with a wolf biologist in Wyoming to find out how they count them and study them.

SARAH SCHWEINSBERG: Field days are some of Ken Mills’s favorites.

He’s headed out of the office and into the Wind River Mountains: more than 2 million square miles of wilderness.

MILLS: A huge component of my job is fieldwork. Tracking wolves. Looking for new packs. Working on catching wolves for radio collars, those sorts of activities.

Today’s wolf tracking site is an hour up into the mountains. On the way, Mills explains that at one time, humans had completely killed wolves off here.

MILLS: In Wyoming, specifically wolves were extirpated by the 1930s. And so no more wolves in Wyoming at that point.

Humans often saw wolves as a dangerous threat to livestock or game, like elk and bison. Now, due to government introduction and protection, there are about 300 wolves in the state.

Mills pulls his truck up to the trail head. Then he unloads his two all-terrain vehicles.

MILLS: You wanna get a horse out first?

There’s one for me and one for him.

MILLS: I use a horse from April to November, usually sometimes into early December.

It’s the last day of August, but it’s cold. Mills pulls on leather chaps, a green wool sweater and suede cowboy hat. He loads his saddle bags with cold pizza and some survival gear.

MILLS: I carry bear spray. I have a lighter in my saddlebags in case we need to light a fire and I have a spot unit that I can contact out if I need something.

Today, Mills is on a mission to gather a wildlife camera that will help him count how many wolves are living in these mountains.

MILLS: Part of my job is really making sure that we have a rigorous and accurate count of wolves in Wyoming so that we can demonstrate that we’re managing the population responsibly.

Mills’ interest in wolves and wildlife started as a boy. In college, he studied wildlife biology, and one of his professors sent him on a mission to track a wolf pack in Northern Michigan. That’s when Ken Mills officially fell in love.

MILLS: It was September 22, 2000. By God’s providence, I would say found wolf tracks and they were adult and pup tracks there.

An hour later and a thousand feet higher, Mills stops his horse at a scenic and windy overlook.

Suddenly, a pair of shovel shaped antlers shoot out of a grove of pine trees. A bull moose.

It runs full speed down into the valley, never looking back.

Mills wonders if it’s running from something. Maybe wolves.

This is the Lava Mountain Wolf Pack’s territory. They’re 10 strong and have held onto this territory for several years now.

MILLS: They maintain territories through a kind of constant maintenance of boundaries by scent marking. They howl. So howling is a form of territoriality communication, to communicate within packs, but also to show other surrounding packs, we exist. We’re here.

Mills says it’s important to unify the health of wolves with human interests. The wolf data he gathers helps by keeping wolf populations in a healthy range.

MILLS: The needs of people can be met. But also wolves have a legitimate place that that they can inhabit and and operate in.

Mills weaves his horse through the trees and into a meadow covered in willow bushes. Along the tree line, there’s a lightly trampled, narrow path. This is a wolf highway.

MILLS: This will be the trail they will continue to use when they rendezvous in this area…

Back in June, Mills strapped a wildlife camera to a tree along this path. It’s captured more than 200 wolf videos.

MILLS: It’ll do night shots and day shots. [Sound of clicking through]

In one video, a black wolf romps through with a pup. In another, several pups playfully pounce and roll along the path.

These pups are what Ken Mills was hoping to see.

MILLS: We have a commitment in our management plan to manage for a certain number of breeding pairs, which is a pack that raises at least two pups of the year to the end of December. So that’s the most intensive part of our monitoring is: did they den, did they have pups, did the pups survive till December?

He puts the camera in his saddle bag. He’ll comb through these videos tomorrow.

Mills encourages our horses to cross a cold, clear stream. The weather is turning and snow flurries start to fly. Up here, winter is never far off.

He dismounts and pulls out a radio receiver and a large antenna. He’s put radio collars on three wolves in the pack. If they’re in the area, the radio will pick up their unique signal.

MILLS: We’re looking to pick up that frequency and figure out what direction it is.

Today. There’s just fuzz and more fuzz meaning they are either too far away or on the other side of a mountain blocking the radio’s signal.

As we start our ride back, Mills stops at a flattened circle in the grass. There’s scattered bones from an elk or a deer and porcupine quills.

MILLS: This is a place that the wolves have used as a rendezvous site.

Even after two decades of studying wolves, seeing evidence of where they’ve been still puts Mills in awe.

MILLS: It gets routine, but it never gets old.

And while we didn’t see any wolves today, Mills says just spending time in their habitat helps him understand how and where they’re moving and hunting.

MILLS: Every day you’re in the field, you, you see things, you learn things.

Unifying the interests of wolves and humans will continue to be a challenge. But Mills hopes his work will help people understand why God pronounced everything he created good—including wolves.

MILLS: We’re looking at something that God’s said, You know what? I could make a boring Earth, but I’m gonna do more than that. And he decided to create something that, that just blows our socks off.