Savoring life on a tea plantation 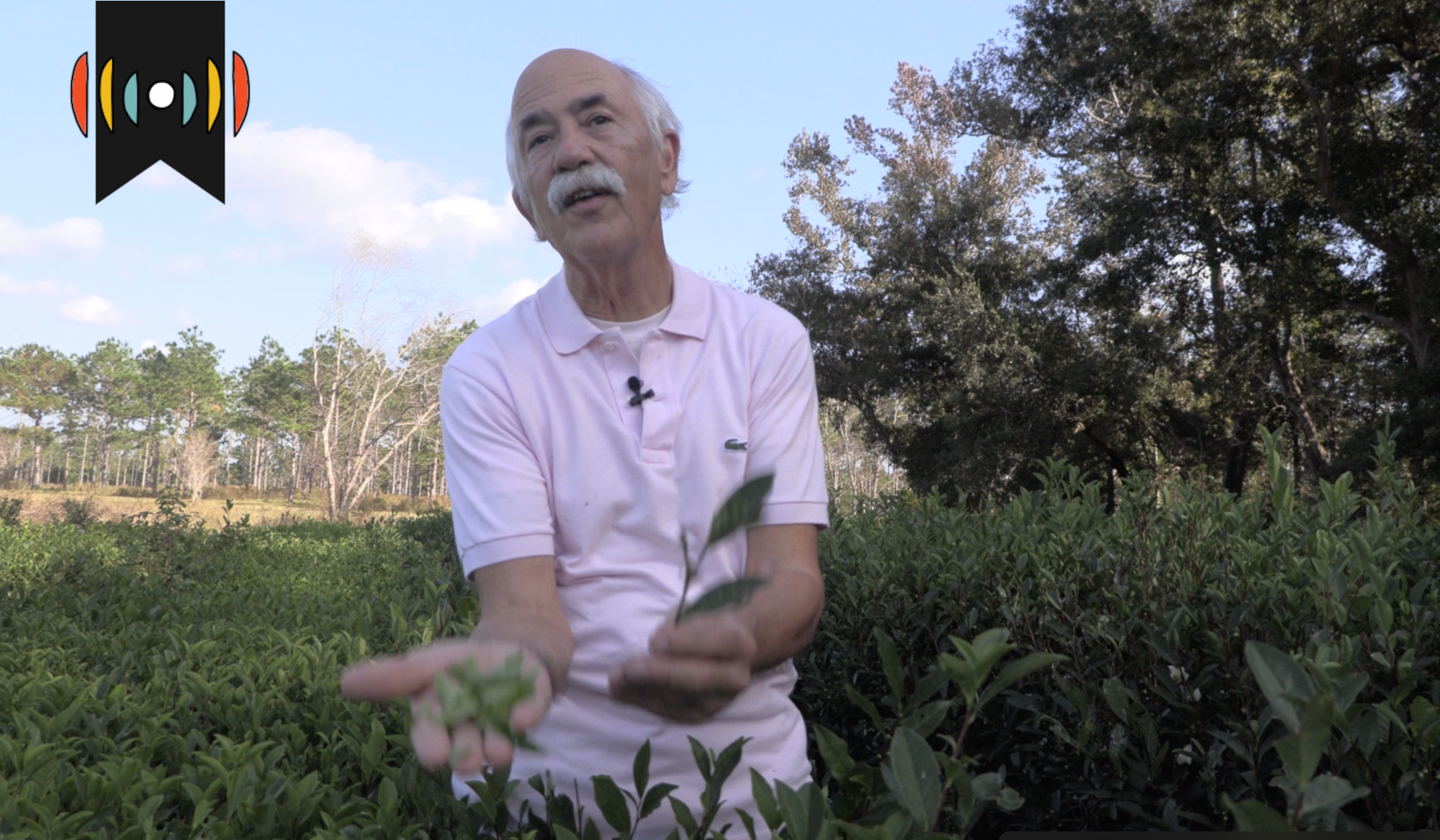 MYRNA BROWN, HOST: Today is Thursday, November 10th. Thank you for turning to WORLD Radio to help start your day.

Coming next on The World and Everything in It: Making tea!

Depending on where you live, people drinking cups of java tend to outnumber those sipping cups of tea. I had a fresh cup of mushroom coffee this morning and I plan on herbal tea this afternoon! What about you Myrna, are you a coffee drinker or a tea sipper?

A spot of tea always hits the spot for me. (MR: Hey, that rhymes!) That’s probably why I jumped at the chance to visit a real tea farm and meet a man who turned a hobby into a 40-year-quest. (MR: Cool!)

AMBI: Your destination is on the right. [TIRES ON GRAVEL]

MYRNA BROWN CORRESPONDENT: Even before the GPS announces my arrival, the transition from smooth asphalt to bumpy gravel makes it clear: I am no longer in the city or on the clock. I’m on Donnie Barrett’s time.

Walking towards me in a pink golf shirt, cargo pants, and a pair of crocs, Barrett carries a tray with two tea cups filled to the brim. It’s how the white-haired grandfather starts each day.

BARRETT: People will come in and sit down and the first thing I do is I give them a cup of tea. I want them to know what we’re talking about.

73-year-old Barrett knows tea. His father was a research agriculture scientist. In the 1970’s he supervised a short-lived experiment by the Lipton Tea company. Worried about the instability of third-world tea production, Lipton operated experimental tea farms throughout the southeast. A then twenty-something-year-old Barrett remembers the day the study abruptly ended and the company abandoned the site.

BARRETT: I was in my pick up truck and my father said come look at what they did to the tea experiment. And we said, that’s just a shame they destroyed it like that. And he said, well you want to get you up some?

Barrett scooped up three badly damaged tea root balls and planted them in two empty lots his family owned. While he worked as a graphic artist, tea farming became a hobby. But Barrett struggled to crack what he calls the tea-making code.

BARRETT: That’s when I found out that tea all comes from the same plant, that if you dry the leaves out, that doesn't make tea, it makes dirty water that kind of smells like tea and that how you make tea is called family and industrial secrets.

So, in 1984 Barrett traveled to China to unlock those secrets.

BARRETT: I went through factories and I looked like a mindless tourist, keeping in mind I had hundreds of plants back home, and I said, well how hot do you get that anyway. But I knew what I was looking at. And I really stole technical secrets from the Chinese.

That information is now part of his daily tea tours--hour-long, outdoor-classroom sessions.

AMBI: We’re moving… so where are we going? We’re going out in the fields where the tea grows.

Barrett shares the tricks of the trade with anyone willing to hop on his golf cart. As we make our way across his 5 ½ acre farm, we share the gravel road with a family of 20-year-old peacocks. Barrett and his wife Dottie also have chickens, roosters, parakeets, two dogs and a scarecrow.

BARRETT: Green tea and black tea is made totally different. It’s different processes, but you make it from the same leaves. You can make green tea, black tea, yellow tea, you can make breakfast tea and it’s the slight subtle things you do with the processing that makes those different teas.

For instance, Barrett prefers to grow tea in the sunlight, rather than in the shade. He says sunlight affects the cell structure in the leaf.

BARRETT: And what happens is when those cells stand on in, the chlorophyll is on the top and the bottom of the cell fills up with lipid, that’s fat, that’s flavor.

BARRETT INTERVIEW: If I let it grow, it’ll grow 35 feet tall, but I keep it cut off in this shape right here. This round-top row. But over here on my right there’s a flat row, that’s cut off real flat...pancake flat.

Barrett says tea bushes pruned in the shape of a pancake are most productive.

BARRETT INTERVIEW: They look like asparagus, only just ½ inch each from each other and they just all stick up uniformly and I just rip them right off and I make the green tea out of that. And over here on this rounder row, the more traditional cup-cake shape, this is what I tend to make my black teas out of.

Barrett sells both teas to his customers. But as he stoops down and pulls up a root from the earth, he says he’d rather teach them how to be producers.

BARRETT: See, that’s a tea plant. That’s about a two year old plant and that’s what I sell to people for a dollar.

BROWN: And why do people want that?

BARRETT: Because they want to start making their own tea.

BROWN: And you don’t mind sharing your expertise?

BARRETT: No, I enjoy it and I enjoy telling people about it.

After four decades of tea-farming, Barrett says there are a few things he wishes didn’t come with the territory. Sandwiched between two large bodies of water, his farm has survived 13 hurricanes.

He also says the name he chose for his farm has been a point of contention for some.

BARRETT: They think plantation has a negative connotation. And a plantation is called a planned planting and I came here with the intention of planting tea and I bought it as a plantation. And I called it Fairhope Tea Company, but that means I’m buying someone else’s tea and selling it. And so I changed my name to Fairhope Tea Plantation to let them know I’m growing that tea.

BARRETT: I like to pick tea around 4 and 5 in the afternoon. About 3:30 or 4 I’m laying on the couch and going I don’t want to go out there and pick that day, but as soon as I come out here I’m in my element. I’m as happy as I can be. I do it because tea is fun and I enjoy doing it.

REICHARD: If you want to see the tea farm, Myrna produced a companion piece that also airs today on WORLD Watch. That’s our video news program for students. We’ll post a link to that story in today’s transcript: https://app.worldwatch.news/programs/steeped-in-tradition