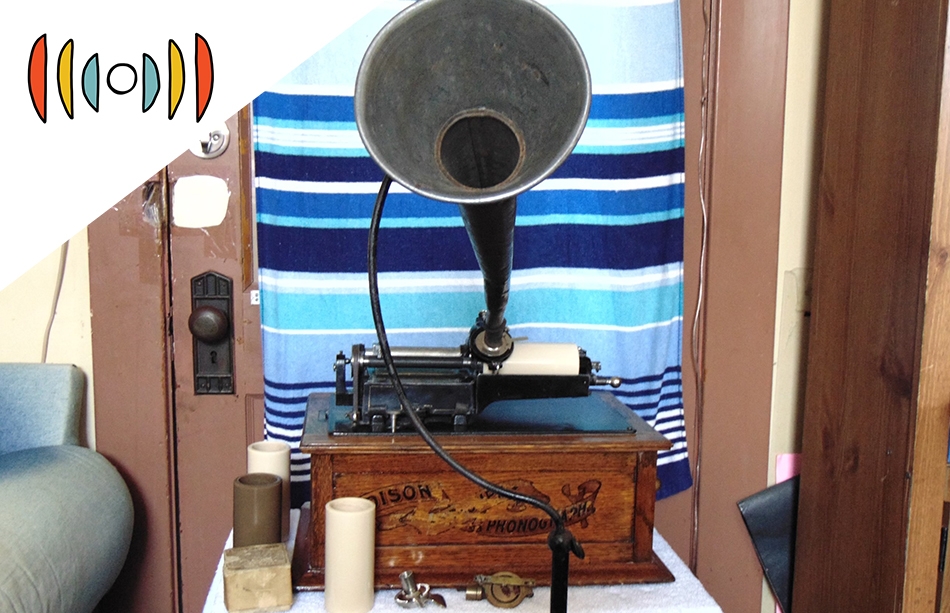 MYRNA BROWN, HOST: Today is Thursday, July 22nd. Thank you for turning to WORLD Radio to help start your day.

PAUL BUTLER, HOST: And I’m Paul Butler. Coming next on The World and Everything in It: antique audio recordings.

Compared to writing and printing, the ability to capture the human voice and play it back is a relatively recent invention. It’s only been around for about 150 years. One of the earliest pioneers was American inventor Thomas Edison.

CALEB BAILEY, REPORTER: In an upstairs apartment in downtown Princeton, Illinois, recordings like this play around the clock. But these records aren't the black, flat discs you’re familiar with. Audio historian, Shawn Borri.

BORRI: We're going to be listening to some 5 inch records. This one dates from 1903.

The cylinders are four-and-a-half-inch tubes of wax. They look like a candle with the middle bored out. The cylinders are played without electricity on Edison phonographs—invented in the late 19th century.

BORRI: He didn't like disks very much, he was a cylinder guy.

Thomas Edison’s love for cylinder records was contagious. Borri took an early interest in cylinders and the acoustic playback device.

BORRI: I saved can money, I'd buy antique stuff. And so I was about 12 or between 11 or 13 I'm not sure exactly how old that was. But I bought that machine and had to do a lot of work to it had to fix the spring the spring was broken in it

A self-taught mechanic and avid reader, Borri learned the ins and outs of the complex machine and began to collect as many pieces as he could.

Eventually Borri transformed this hobby into a business. He adopted the name “The North American Phonograph Company” from the original owners who went bankrupt in 1894.

BORRI: The purpose is to buy, sell, rent, lease, and acquire and dispose to persons and corporations the rights to use devices that record sound.

SOUND: BORRI ON WAX CYLINDER “I am the Edison concert phonograph, created for the Great Wizard of the New World”....

Borri shares his love of the Edison phonograph and wax cylinders with everyone he can. He takes them to festivals and concerts. He's even been a guest lecturer at Berklee College of Music and Millikin University.

BORRI: And then by about 1991 or two, I started recording cylinders.

The phonograph not only plays back, but records.

BORRI: What acoustic recording is, is using sound pressure to record without the aides of microphones or electronics.

As a person speaks, or sings into the wide end of a long horn, acoustic energy travels down the funnel. At the base, the concentrated sound puts pressure on a diaphragm that moves a strong needle. It carves grooves into the wax cylinder. The louder the sound, the deeper the cut.

BORRI: As soon as you are done recording, it's ready to play. It's an instant process, you have to brush with a camel hairbrush the little flakes and shavings…

Borri makes a lot of recordings for other people. Some customers bring pre-recorded songs they want transferred to wax cylinders. But he looks forward to original work.

BORRI: I love live recording. It's more involved and not as appreciated when you're just copying things onto them.

He’s recorded jazz bands, solo guitarists, and orchestras. Borri pushed his creative limits in a recent project that has received over 4 million views on YouTube.

BORRI: We recorded, as far as I know, the very first live, acoustic heavy metal cylinder. I've looked and I haven't found anybody else who has done that.

As you might imagine, there are very few original cylinders available. So Borri learned how to make his own.

BORRI: There’s like no other place you can see this being done.

The wax’s primary ingredient is stearic acid, which comes from animal fat.

The wax is heated to over 300 degrees Fahrenheit. Borri then pours it into a mold. The mold is a larger iron cylinder with a spiral core at the center.

The timing has to be just right. If the wax cools too quickly, there are bound to be problems with its structure.

BORRI: I would say I’ve made about 2000 lbs of cylinders.

That’s more than 5,000 cylinders. The labor-intensive process of molding and shaping the wax tests Borri’s patience.

BORRI: I get burned all the time. It comes with the job and it's horrible burns. Yeah, we had to failure on this one. It's okay….

Borri throws out a good portion of the cast cylinders, but today was a good day. He got it right on the second try.

BORRI: And that looks like a good successful casting.

Borri is a recording enthusiast. He's always on the lookout for pieces of unique history. Across the street from the North American Phonograph Company is Bluejay Way Records, where owner Jim Lovejoy knows Borri well from frequent visits.

LOVEJOY: Probably within six months after we opened our first store, he came in looking for 78s, which nobody looks for 78s.

That refers to a kind of record that spins at 78 revolutions per minute: Standard in the early 20th century.

LOVEJOY: He knows exactly what he's talking about. extremely knowledgeable on recording techniques, sound, sound waves, anything involved in it. He's just, he knows his stuff.

Borri is kind of a local celebrity. His knowledge and determination has preserved a precious piece of history.

SOUND: AUDIO FROM A VINTAGE RECORDING

The sound that comes out of the phonograph is foreign to most listeners today. It doesn’t fill rooms the way a sound system does. But Borri likes it that way.

BORRI: So if you listen, there is a somewhat of a realism to it.

It’s the sound of history. Whether recorded yesterday or 100 years ago, Borri says the sound coming off a wax cylinder is authentic.

BORRI: You'll probably find that there is a intimacy and a closeness in the sound to an actual human without electronic interference. And it's hard for modern people like even myself to understand what sound is like without some electrical connection to it.

Reporting for WORLD, I’m—wait a minute. What am I doing? I have this on a wax cylinder…