Moscow concentrates its forces on the new objective - taking the Donbas

Local residents stand atop of a Russian tank damaged during fightings between Russian and Ukrainian forces in the outskirts of Kyiv, Ukraine, Monday, April 11, 2022. Evgeniy Maloletka/Associated Pres Photo 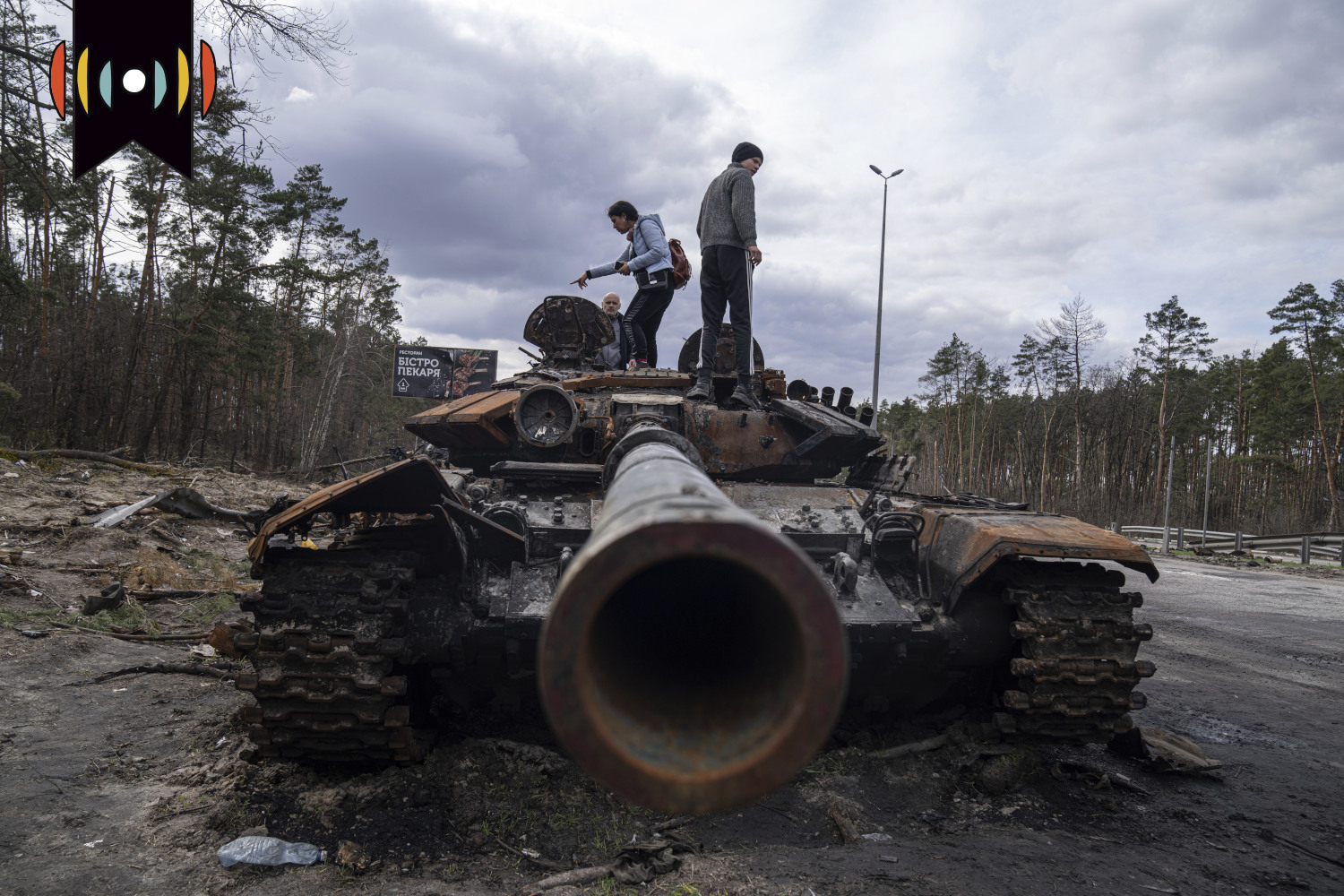 MYRNA BROWN, HOST: Coming up next on The World and Everything in It: Russia refocuses its invasion on eastern Ukraine.

This week, Moscow’s forces launched their long-feared offensive in Ukraine’s Donbas region. That is a largely Russian-speaking part of the country where Ukraine’s military has been battling Russian-backed separatists for years.

It’s a battle that could mark a major turning point in the war, in one direction or the other.

STEVE BUCCI, GUEST: Good morning. Thank you for having me on the show.

REICHARD: Glad to have you. Well, very little of his war has gone the way that Vladimir Putin envisioned. Why has this invasion gone so poorly for Russia?

BUCCI: Well, primarily because the Ukrainians turned out to be much harder fighters, and much more ready for this assault than everybody else realized. I mean, including us, but definitely Vladimir Putin. And then the other aspects are because the Russian military, as it turns out, is not quite the 10 foot tall giants everybody thought they were. And they are showing all of the negative signs of a third world conscript army.

REICHARD: The United States and NATO allies continue to send in weapons and equipment. What are Western powers sending and what should they send to Ukraine to help them win this particular battle in the east?

BUCCI: They continue to send some of the weapons that have been highly effective—the Javelin anti-tank missiles, the Stinger anti-aircraft missiles, their British equivalents, which have different names, but have been very, very effective. And small arms, things like that. But what they really need now is the heavier weapons systems. They need tanks, they need aircraft, both rotary wing helicopters and fixed wing. And all of this stuff that they're looking for is not brand new, top line, American equipment. They want the Soviet era type weapon system, the MiG aircraft, T-72 tanks, the so-called S-300 anti-aircraft missile system, which can shoot down planes at higher altitudes, things that the Ukrainians already know how to use because they have them as well. They just need more of them now to counteract the heavy forces that Russia is concentrating in the eastern part of the country to try and wrest control of that area from Ukrainian forces.

REICHARD: How hands-on has the Pentagon been in terms of providing intelligence and direction to Ukraine’s military?

BUCCI: Very hands-on with regard to the intelligence. At least that's the indicators we're getting. They are sharing incredible insights as far as the Russians capabilities, locations, as much as they can divine their intent. We're sharing all of that intelligence-wise. That's pretty easy to do technologically and because it's essentially under the radar. The advising that they're doing is much more low-key, much more stand-off, most of it going on outside of Ukraine proper. If we have folks inside Ukraine doing it, they're probably from the CIA ground branch, not from the Pentagon. I personally would love to see us start using some of my old colleagues from the Army Special Forces inside Ukraine. They can do that very low key, very low footprint and have a lot of very positive effect. But the Pentagon, I love reading in the paper says the Pentagon can't get this equipment there. Or the Pentagon decided it's not the right thing to do. The Pentagon doesn't do that stuff on its own. The Pentagon does what the White House tells the Pentagon to do. And generally speaking, if the White House says we want this done now, the Pentagon is superb at figuring out how to do it. So, I think there's some dissembling going on here now with the administration trying to make it look like the Pentagon's bureaucracy is the problem. And the Pentagon is actually pretty good at cutting the Gordian knot, if you will, with the same amount of subtlety as Alexander the Great used, which was just cutting it with a big sword. So they can get things done but they've got to have permission from the White House to do it. And that seems to be lagging right now.

REICHARD: Interesting. Colonel, what has surprised you about this war so far?

BUCCI: The real surprise I think for everybody is how essentially incompetent the the Russian military seems to be. Their logistical support is almost non-existent. We knew their leadership style, the way they transmit orders, which is very centralized, very much top down, the high leaders, including generals, have to be right there in the front to get things done. And that makes them very vulnerable so that the Ukrainians have killed a whole bunch of them. We were joking that the new central commander for the whole operation, we really should describe his title as “Next” because if the Ukrainians can get a shot at him, he's going to be gone. And then just the discipline of the Russian soldiers has been abysmal. They're not doing their jobs properly. They're committing atrocities against civilians, some of which are probably intentional from their leadership as a terror kind of tactic, but some of it is just an indicator of really ill-disciplined troops. And you can't fight a modern war with barbarians anymore. You have to have disciplined, trained, and organized troops. And the Russian army does not bring that to the table to the degree that they should. And that's allowed the Ukrainians to really put a lot of damage on the Russian military.

REICHARD: Retired Colonel Steve Bucci, now a visiting fellow with the Heritage Foundation. Colonel, we thank you for your time.

BUCCI: Thanks so much. It's my pleasure. Thank you for having me. And thanks for keeping this important subject at the forefront.