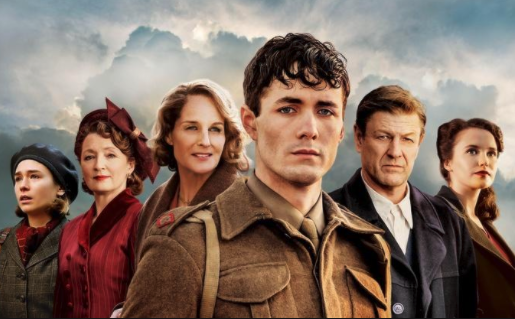 MEGAN BASHAM, HOST: And I’m Megan Basham. Coming next on The World and Everything in It: PBS Masterpiece is back with a stirring war series.

Here’s what really frustrates me in a time like this, a time when we could really use some good, edifying storytelling: So little of what’s being called binge-worthy fits the bill.

Yes, I’m looking at you Tiger King. And no, I’m not reviewing you!

Other than to say this:

This series features petty, wretched people going to war over, what? Who’s less of a hypocrite for egotistically collecting big cats as trophies?

Sure, it’s addictive. So is meth.

Now, maybe you cringed your way through it. After all, it’s reportedly the most popular show in the country right now. And if you did watch it, you won’t need any further evidence that neither methamphetamine nor Tiger King is good for you.

What this moment really calls for is something grander: a tale of stiff upper lips and resilient spirits

So it seems the perfect time for PBS Masterpiece to swoop to our rescue. Premiering this Sunday is the sprawling, ambitious historical drama, World on Fire.

We’ve had no shortage of stories set in World War II in the last few years. But World on Fire is different in how often it follows story lines away from military strategies and political leaders. Its focus is on the quiet people whose lives are impacted by those on the front lines making big decisions.

Sean Bean, for example, has made a career of playing noble, iron-jawed leaders of men, like Boromir in Lord of the Rings. But he’s equally wonderful here as a meek, working-class pacifist whose mind was shattered in World War I. His two young adult children love him, but they don’t respect him. His daughter, especially, feels he’s wrong to want Britain to stay out of the conflict. With the luxury of hindsight, we know she’s right. But we also understand why her father is committed to peace at all costs.

CLIP: Am I too soft on him do you think? What am I supposed to do? Your mom could handle him, you can handle him. That’s pacifism for you, dad. Aye. I thought you’d be a pacifist too. What with your sweetheart in the firing line. He’s not my sweetheart. He’s not in the firing line. He’s a translator, not a soldier. You think the bombs can tell the difference, do you?

The show also explores Third Reich crimes that are too often overlooked, perhaps because they strike too uncomfortably close to our own.

As we would expect, an American journalist in Berlin, played by Helen Hunt, reports on troop movements and battles.

CLIP: The world has averted its eyes to the build up of German troops along the Polish border and Hitler’s threat to take Danzig by force. The polls have bicycles, the Germans have tanks. Make no mistake, The Nazi party is a master of illusion and the greatest illusion of all is that they are seriously go Xiaoting for peace. This is Nancy Campbell, American radio international, from Warsaw.

But she also starts investigating a lead on Nazi’s euthanizing German children with Down syndrome and other disorders. Her friendship with the parents of a girl with epilepsy brings a little-seen level of nuance to the German people. Plenty of the locals she meets are evil. But others are scared and desperate, keeping quiet in the face of atrocities in the hopes of protecting their families.

The plot can veer to the soapy at times. Coincidences build upon coincidences as major characters cross one another’s paths a little too often in too many unlikely ways.

CLIP: You’re gonna have to marry her aren’t you? That way she gets papers to travel with you. I know you’ve got a girl back home but, you know what, being in love with two girls at the same time, that happens. But you’re not choosing which girl you love the most right now, Harry. You’re choosing whether to save this girl’s life or not. The game just got bigger. Did you?

And, of course, it wouldn’t be a British show if it didn’t include some tough old battle-axe in the mode of Violet Crawley dropping wry witticisms like the Luftwaffe drop bombs.

Yet for all the melodrama, compared to many other streaming, cable, or even broadcast series, there isn’t much skin or sex to speak of. For example, when an unmarried girl conceives a baby with her soldier boyfriend, the act is implied, not shown.

But Christian viewers will want to be aware that, despite the restraint shown with other characters, there is one unmarried couple we see lounging and talking in bed on several occasions. The couple consists of two men. And while the violence is relatively low for a war series, there’s considerably more language than past PBS productions.

It’s a shame, because without these drawbacks, World on Fire, would be just what the doctor ordered for home-entertainment right now. But if nothing else, it is, at least, a step in a better direction.