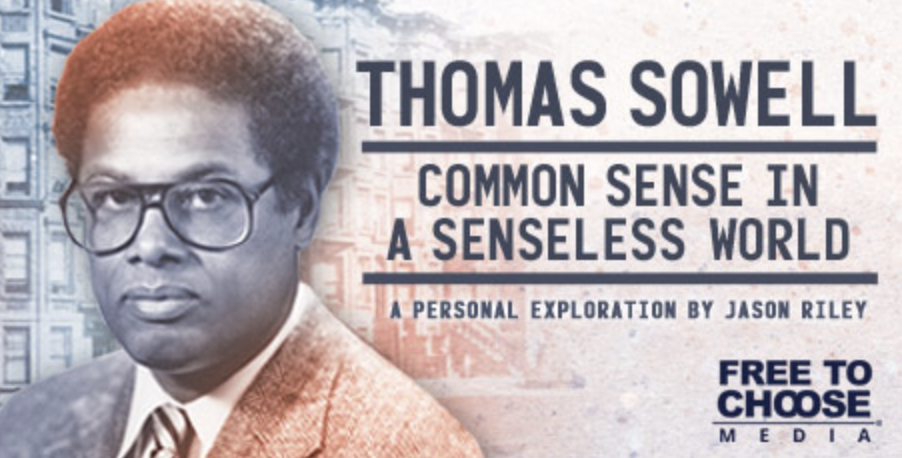 NICK EICHER, HOST: And I’m Nick Eicher. Coming next on The World and Everything in It: Megan Basham has a review of a new documentary she thought was a perfect pick for her first review of February.

And I agree. Probably the greatest living economist.

Its subject: a man, a myth, a legend.

MEGAN BASHAM, FILM CRITIC: Sometimes you just have to thank God for His providential timing. Last week I was casting about for a film recommendation to kick off Black History Month. Then I received an email about a new documentary on the life of one of America’s preeminent philosophers and, arguably, our greatest living political theorist.

CLIP: For me, Thomas Sowell is that rarest of species. An honest intellectual. He spent a career putting truth above popularity. He’s explored the answers to questions others were afraid to even ask. He’s followed the facts where they lead. And accepted the findings however unpopular or politically incorrect.

The film, hosted by Wall Street Journal columnist Jason Riley and streaming free right now on YouTube and Amazon Prime, is aptly subtitled, Common Sense in a Senseless World. It shows us how Sowell’s early love of books developed into an incisive mind that refused to be taken captive by emotional appeals not backed by hard data. Over a 60 year career, his commitment to reality over theory, heedless of who reality might offend, has never wavered to accommodate the times.

As if to underline the point, the film isn’t shy about grappling with those Sowell quotes that tend to cause a lot of consternation in our current cultural moment:

CLIP: If you have always believed that everyone should play by the same rules and be judged by the same standards, that would’ve gotten you labeled as a radical 50 years ago, a liberal 25 years ago, and a racist today.

In many ways Sowell’s journey is similar to that of another great American thinker, Supreme Court Justice Clarence Thomas. Sowell also grew up in the Jim Crow South and spent his early 20s committed to Marxism. But it wasn’t reading or debating Republicans that convinced him liberal ideas are harmful to the black community. It was his personal experience in the Department of Labor. What studying under the great conservative economist Milton Friedman couldn’t do, working for the federal government did. By the time he was a professor himself, Sowell saw nothing but mischief in the welfare system and policies rooted in identity politics.

CLIP: In 1965, Thomas Sowell took a teaching position at Cornell. Like many other colleges it became a focal point for anti-war and anti-discrimination protests and demonstrations. When armed black students took over a building on campus, Sowell had little sympathy for school administrators. Blacks had been recruited to Cornell under lower standards to diversify the student body and Sowell observed that many of the same students were now causing trouble and feeding racial divisions. For Sowell it was an example of the unintended consequences of affirmative action.

While our nation has no shortage of smart economists, the film illustrates what sets Sowell apart from so many ivory tower academics: his plain way of speaking. His arguments are as easily understood by the gardener as the grad student.

Here’s talk-show host Dave Rubin describing what happened when he interviewed Sowell with the aim of introducing his ideas to a new generation raised on YouTube and podcasts.

CLIP: There’s an absolutely beautiful moment where I ask him about his own political evolution. So then what was your wake up to what was wrong with that line of thinking? Uh facts. I love that moment. I mean, I knew the second he did it, I was like, we got our clip. That’s as good as it gets. And it gets to, what does this man care about most? Does he care about how he feels about things? How he wants the world to be? Or how is the world as it is? Because that’s what he saying, I care about facts. The world is a certain way, and now, using that as a baseline, we can try to figure out how to make things better.

I joked on Twitter a couple days ago that in trying to select soundbites for this segment, my notes had turned into, basically, a full transcript of the movie. And while that’s true, it doesn’t mean the film has no failings. We can often learn as much about a man and his ideas from his critics as we do from his fans. So it’s a shame Riley doesn’t talk to any. And occasionally, he digresses into making his own arguments rather than focusing on his subject.

The film is most insightful when it examines Sowell’s softer side, illustrating how even his photography hobby underlines his worldview.  To borrow a metaphor from Ephesians, in it we see a mind too sharp and too strong to be blown about by every new wind of cultural doctrine or ideological fad.

CLIP: If you close down the diaphragm, then you get lots and lots of stuff in focus near to far. On the other hand, you’re cutting down the amount of light. And a theme in Tom’s work on society is that all policies involved trade-offs. And Tom often loses patience with people with sweeping visions. Here’s how we can improve society. Here’s a solution to a problem. And Tom points out in his political writings there are no solutions, there are only trade-offs. Just like photography.

Perhaps as a result of their relative isolation, it seems like many conservative black scholars are banding together, creating a body of documentary film work that will leave a legacy for the future. Just the last few months gave us Larry Elder’s Uncle Tom, the excellent What Killed Michael Brown from Shelby Steele, and, of course, Created Equal, on the life of Clarence Thomas. This deep if, at times, overly reverential look at the life of Thomas Sowell deserves a prominent place among them.