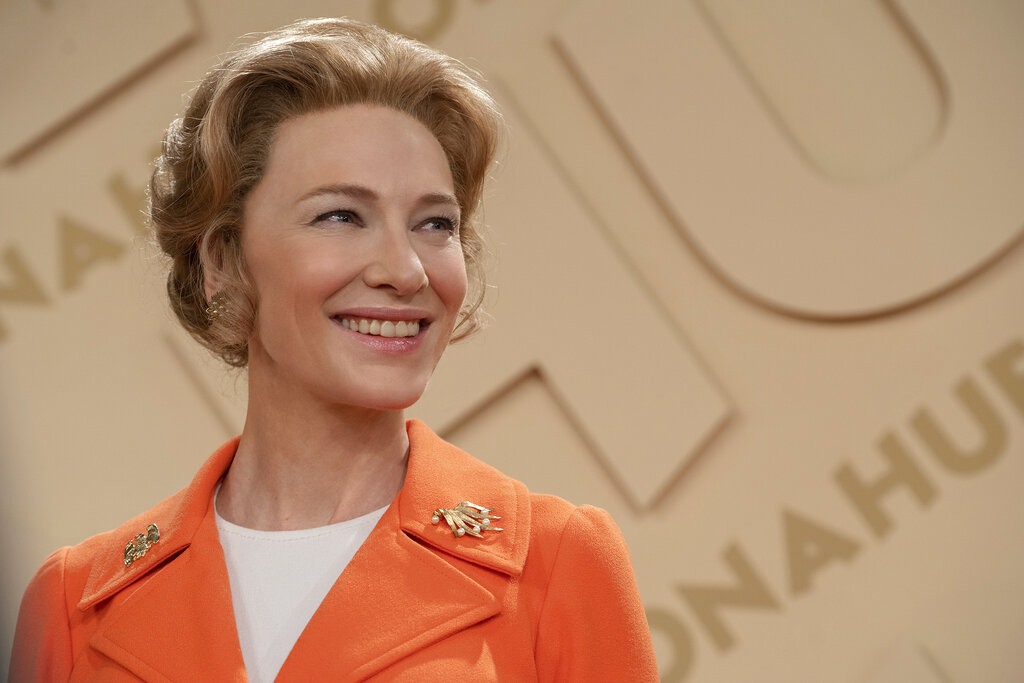 NICK EICHER, HOST: It’s Friday the 24th of April, 2020. Glad to have you along for today’s edition of The World and Everything in It. Good morning, I’m Nick Eicher.

MEGAN BASHAM, HOST: And I’m Megan Basham. We’re switching our Friday recipe here a bit, and we’ll start with a film review that will help set up Culture Friday, which will follow.

So first up, a conservative icon gets the Hollywood treatment.

You know, it’s a curious thing about casting a dynamic performer to play a larger-than-life personality. Even if the portrayal is meant to be unflattering, it can still create a powerful lure. That’s the case with Oscar-winner Cate Blanchett playing Phyllis Schlafly in the hit FX drama, Mrs. America.

CLIP: If it makes it through the Senate the insurance industry will be the least of the casualties. The left will demand taxpayer-funded abortions, state-run daycare centers, women in foxholes. Sounds a lot like the Kremlin’s agenda. The problem is everyone from Kennedy to Wallace seems to be for it and there’s no organized opposition. Well, nobody wants to vote against an amendment that has the words “equal rights” in the title. Which is exactly why they put it in the title. Which is exactly why we keep losing to them.

Rated TV-MA for language, the show, which is also streaming on Hulu, currently ranks as one of Rotten Tomatoes most popular and best-reviewed. It follows the rise of the Equal Rights Amendment and its eventual defeat thanks to Schlafly and her army of homemakers.

The show depicts feminists like Bella Abzug and Betty Friedan as fiery, intellectual, and even glamorous in their crusade. Rose Byrne as Gloria Steinem is especially attractive, boasting the willowy loveliness of a Hollywood starlet.

Steinem shuns positions of power. She cares more about the cause than raising her personal profile. And makes time in her busy schedule to listen as a young fan talk about her shame over having an abortion. Most especially, Steinem resists capitalizing on her good looks, even for the sake of the movement.

It’s a little hard to square this self-effacing depiction with the real Steinem who’s rarely slow to attach herself to news stories.

Schlafly, by contrast, gamely slaps on a bikini for a fashion show fundraiser. She rules her organization, which she at one point tries to name after herself, with a perfectly manicured iron fist. And she sweeps aside any upstart housewife who might try to usurp her position. Ambitious and grasping, she callously jokes about feminism as the refuge of spinsters within earshot of her unmarried middle-aged sister, then ignores her wide eyes of pain.

CLIP: I mean after all their hero is Gloria Steinem, a single, childless woman nearing 40, but she’s the sort of miserable, pathetic woman they aspire to be. She wants some kind of constitutional cure for her personal problems. And perhaps that’s why the liberationists are trying to sow the seeds of discontent among we happily married women. They want us to join them in some new sisterhood of frustrated togetherness because none of them can find a man who wants to marry them.

Schlafly’s family have made it clear that Mrs. America’s creators made no effort to consult them or anyone who knew Schlafly well. But even as the script crafts a fictional Schlafly to suit desired ends, inconsistencies shine through. To wit, it seems a bit laughable to depict a woman with six children as unresponsive to her husband’s affection.

But the real disconnect comes when the show sneers at Schlafly’s dire warnings that the feminist movement will lead to a genderless society of women in foxholes.

CLIP: Now the Equal Rights Amendment will positively make women subject to the draft on an equal basis with the men. They’ve got to the point where they truly believe that men and women are the same.Which will mean goodby Girl Scouts and hello unisex bathrooms.

The ERA doesn’t say men and women are the same. It says that they’re entitled to equal protection under the law. What, did you drag her out of the dustbins of the Goldwater campaign so you could hide under her skirt? She found me. You promised you weren’t gonna fight us on this. I changed my mind.

As we all know at this moment, boys are competing in women’s sports and using their locker rooms and restrooms. Last year, a federal judge ruled the males-only military draft unconstitutional. And, just a few weeks ago, a U.S. military commission recommended making women eligible for the draft.

An even half-way perceptive viewer must ask themselves in what way Schlafly’s concerns have proved overblown. Even more though, she shines as the original anti-establishment force within the Republican Party.

When nearly every man on her side of the political aisle was happy to give feminists their amendment, she forced them to begrudgingly pay attention to the concerns of average moms and wives.

CLIP: We might lose Illinois. What? I thought we had the votes? We had the votes, but then this group showed up with bread and suddenly we didn’t have the votes. What group? Housewives with bread and baked, you know, homemade. What kind of bread? What does it matter what kind? I’m curious. Can we get Ginny Chapman back on the phone? Find out what kind of bread it was. Is that all it takes to get a man to change his vote? Well, there was also jam.

Complex and compelling, Mrs. America can’t conceal the charisma of a singular figure who gave voice to tens of millions of forgotten women.

(Sabrina Lantos/FX via AP) This image released by FX shows Cate Blanchett as Phyllis Schlafly in a scene from the miniseries “Mrs. America,” an FX original series premiering April 15 on Hulu.