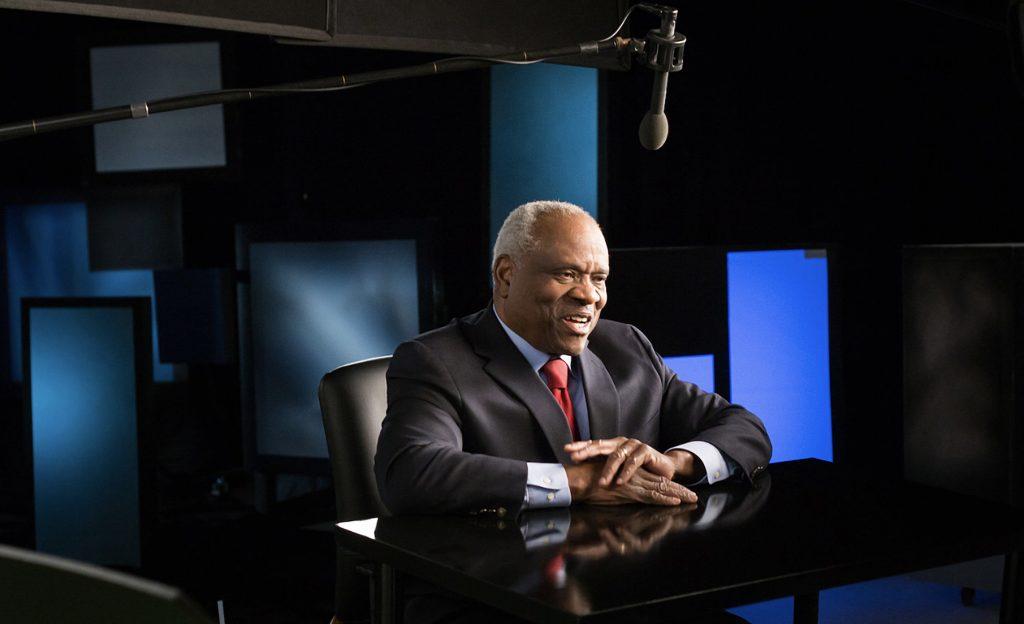 MEGAN BASHAM, HOST: And I’m Megan Basham. Coming next on The World and Everything in It: A Supreme Court Justice has his say.

TRAILER: We know exactly what’s going on here. This is the wrong black guy. He has to be destroyed. You really didn’t matter. What mattered is what they wanted. So you’d still like to serve on the Supreme Court? I’d rather die than withdraw from the process.

Late in the new documentary Created Equal: Clarence Thomas in His Own Words we see a bronze bust sitting high on a shelf in Thomas’s office. It’s of his greatest role model, his grandfather. And beneath the stern gaze are words Myers Anderson often said to Thomas: “Old Man Can’t is dead. I helped bury him.”

Thomas’s journey from Gullah-Geechee-speaking poverty in rural Georgia to associate justice of the United States Supreme Court serves as a perfect model for the complexity, inconsistency, and idealism of the American experiment. Thomas and his wife, Virginia, spent more than 30 hours answering filmmaker Michael Pack’s questions. That makes the film more an in-depth, extended interview than a traditional documentary. The many mainstream outlets complaining it doesn’t include opposing views like those that made up the bulk of HBO’s recent Thomas film evidently failed to finish reading that title.

Christian viewers will find the Biblical principles that shaped Thomas’s life especially fascinating. Though his grandfather was largely illiterate, he drummed the Scripture he’d memorized into his grandsons’ brains. This fostered a ferocious work ethic in Thomas.

CLIP: I was supposed to go to school in the afternoon. My mother wasn’t there to make me go because she had to go to work. So I wandered the streets by myself. I was 6.

Those not familiar with Thomas’s story will find no cliché idolizing of the United States’ virtues. Nor easy demonizing of its vices. On the one hand, the nuns who taught Thomas were very much on the side of oppressed blacks in the segregated South. He makes it clear he couldn’t have become the man he is without his parochial education. Yet it was the blithe bigotry of his white seminary classmates that drove him to abandon his plans for the priesthood.

Thomas’ rage against the inequity and prejudice he encountered as a young man pushed him toward a new religion: Marxism.

TRAILER: We were supposed to be revolutionaries. We were kind of for anybody who was kind of in your face.

Still his grandfather’s wisdom was too deeply implanted to allow him to lose himself completely to campus radicalism. After a night of violent demonstrating, he found himself in church, repenting.

TRAILER: I saw what I had become, lashing out at every single thing. I asked God if you take anger out of my heart, I’ll never hate again. And that was the beginning of the slow return to where I started.

God answered that prayer. As a new father at Yale Law School, the young Democrat began to question more than just the methods of the far left. He saw black students being bused into areas that offered no better education but a lot more inconvenience and strife. He vowed his own son would never be a pawn in similar social engineering. With a wit we rarely get to see from Thomas, he defines this as, “have theory, add people.” Not interested in a life of comfortable tokenism, he also rejected corporate law and the “golden handcuffs” he believed came with it.

Once he made the decision to accept a position with Missouri’s Republican attorney general, there was no going back in Thomas’s ideological transformation. His deep affinity for the natural law the founders advocated overcame his distaste of their individual hypocrisy. Though he couldn’t know it then, it would eventually bring him face to face with a racism as fierce and personal as anything he experienced in Savannah. It even included cartoons depicting him wearing the KKK’s white robes and polishing the other justices’ shoes.

CLIP: Well, it’s stereotypes draped in sanctimony and self-congratulation. There’s different sets of rules for different kinds people. If you criticize a person who’s more liberal, you’re a racist, whereas you can do whatever to me and now Ben Carson. And that’s fine because you’re not really black because you’re not doing what we expect black people to do.

If Thomas’ life were a novel, it would be a riveting one. That said, there are some drawbacks to Pack’s approach. When he asks Thomas about his first marriage, we see the face of the famously reticent judge close tight as the oyster shells his mother once shucked in a seafood cannery. If Pack pushes for any further insight, we never see it.

Still, given that Thomas was only 43 when he was appointed to the Supreme Court, there’s every likelihood that he’ll live to become the longest-serving justice in history. His is a uniquely American journey. A glimpse into the mind and making of such a towering figure is an opportunity not to be missed.