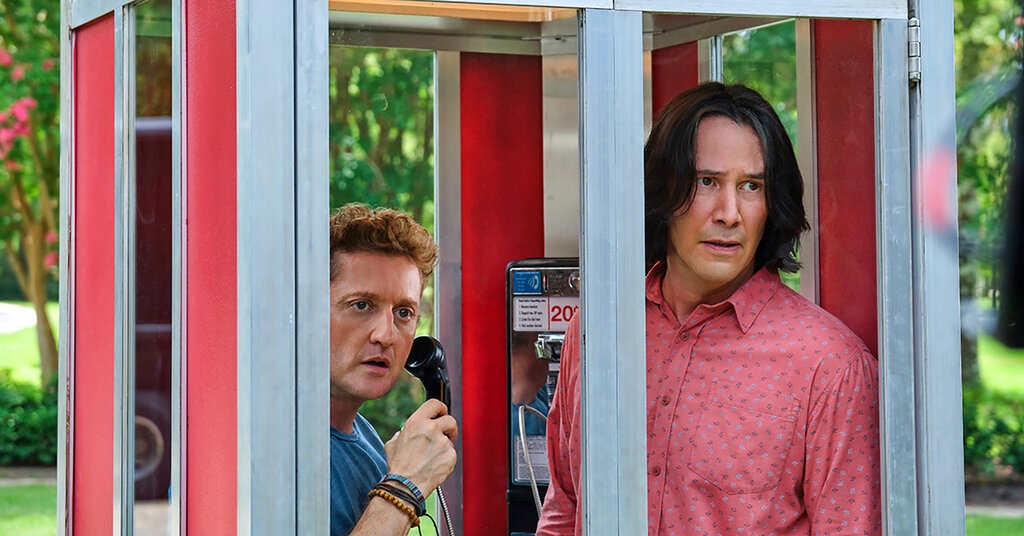 MYRNA BROWN, HOST: And I’m Myrna Brown. Coming next on The World and Everything in It: You may remember this if you’re a Gen Xer—and I’m one, too, but I guess I just have a Baby Boomer soul!

EICHER: Well, I’m a boomer for real and I, like, remember.

Megan Basham tells us whether it’s totally stellar or most heinous, dude.

MEGAN BASHAM, FILM CRITIC: It’s been more than 30 years since the two-man band, Wyld Stallyns, better known as Bill and Ted, graced the big screen. If you’re a child of the 90s there’s a good chance words like “bogus” and “bodacious” bring up fond images of their time-travelling mission to ace their history final.

CLIP: Greetings my excellent friends. Do you know when the Mongols ruled China. Well, perhaps we can ask them. Bill S. Preston, Esquire. Ted Theodore Logan. Gentlemen, I’m here to help you with your history report. What? How? Whoa! Bill. What? Strange things are afoot at the Circle K.

In Bill and Ted Face the Music, the duo have returned to once again teach the world to sing. Or, at least, teach them to play air guitar. Much older, but not particularly wiser, they still haven’t managed to write the song that will unite humanity in peace and harmony.

They also haven’t managed to teach their kids not to follow in their slacker footsteps. Though their daughters are in their mid-twenties, they still live at home and mostly spend their time listening to their dads’ old CDs and snacking on Cheetos.

Until, that is, an emissary from the future arrives and warns them all that the apocalypse is nigh if Bill and Ted don’t at last get their act together and write that song.

CLIP: Could someone please tell me what the hell is happening? Basically all time and space are about to end unless their dads come up with a song by 7:17 pm. Wait, what? We thought this was about the music. It is. It’s also about the end of space and time. Dude, this is way worse than we thought.

If you’re wondering exactly what kind of quantum physics dictates that time and space will end if a couple aging wannabe rockers don’t compose a new tune, well…best not to look too closely at the internal logic.

The real question: Is this new film an excellent adventure?

On that score, I’m afraid I have a bit of bad news. While it’s kind of amusing to see Jimi Hendrix and Mozart jam out together, the new installment doesn’t do nearly as good a job of playing off our impressions of historical figures.

Here, Louis Armstrong and a cave woman are just costumes and accents hovering in the background. There’s nothing half so inspired as when the boys took Napoleon Bonaparte out to an ice cream parlor where, of course, the dictator hogged all the chocolate.

But the movie does have some laughs, like the terminator-style robot whose insecurities get in the way of his job performance.

CLIP: Freeze Preston, Logan. This is exactly what we don’t need right now. We can’t, we gotta get back to the present, like now. Look we know you were sent here to kill us if we didn’t have the song. But we actually do have the song now, so. Wait you have the song. Oh. Mistakes were made. Apologies are given.

Or when Bill and Ted’s wives take them to couples therapy. Emphasis on the couples.

CLIP: Do you understand how that might sound strange to your wives? I’ll shoot this at Bill. No, we love them. We love them. Yeah, we do. Okay, it’s the ‘we’ part. Ted, can you say the same thing but instead of ‘we’ say ‘I’ in the sentence. Elizabeth, I and Bill love you and Joanna.

The biggest problem, though, is that the “like father like daughter” angle is way overplayed. I can appreciate that the producers didn’t want to resort to cheap stereotypes of, say, Kardashian copycats. But what they’ve done just feels like an awkward lurch at gender parity.

Some stereotypes exist for a reason, and girls don’t make the most believable surfer dudes. Watching the ladies try to mimic Alex Winters and Keanu Reeves’ mannerisms becomes painful after a while. Also painful, a few instances of profanity and a couple of flashes of a Last Supper-type image of Jesus. It doesn’t feel malicious, per se. But hard to believe the producers would treat Mohammed so lightly as to briefly show him playing a cowbell.

It’s not all sour notes though. For all its silliness, Bill and Ted carries a welcome message for these troubled times. First, no matter where we come from or what we look like, we can make beautiful music together if we’re willing to share our sound.

Second, and more importantly, men, if you want to save the world, save your marriages first.

So while I wouldn’t necessarily recommend dropping the $20 bucks to stream Bill and Ted Face the Music now, eventually, when you can rent it for a few dollars, a movie marathon that starts in San Dimas circa 1989 may be in order. After all, making your kids sit through the greatest hits of your childhood is what parenting is all about.