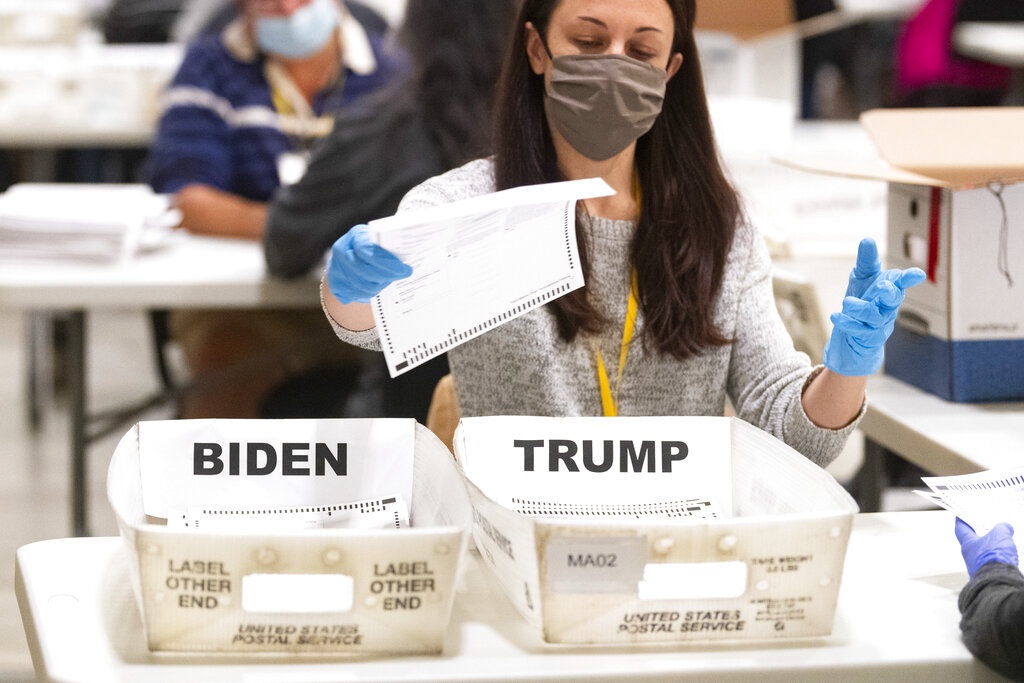 We’re so glad you’ve joined us for today’s edition of The World and Everything in It. Good morning to you!  I’m Nick Eicher.

In a little less than a month, 538 electors from all 50 states will cast their votes for the president and vice president. These electors make up the Electoral College. A candidate needs at least 270 votes to win the highest office in the land.

EICHER: Forty-eight states and the District of Columbia use a system we call “winner take all.” It is what it sounds like: whichever candidate wins the popular vote in each state receives all its electoral college votes.

SARAH SCHWEINSBERG, REPORTER: Colorado voters had 11 amendments and propositions on the ballot this year. One important question? Do Coloradans want to change the way the state awards electoral votes. By a 52 to 48 percent margin, voters said they did.

With that, Colorado became the 15th state to join what’s called the National Popular Vote Interstate Compact or NPV. The District of Columbia has also joined.

Scott Drexel lobbies states to join the compact. He says it would make for much smoother transitions of power.

DREXEL: It eliminates all the chaos that we’re seeing currently play out the 2020 election.

Here’s how the NPV would work. Each member state would award its electoral votes to the presidential candidate who wins the national popular vote. Even if that candidate didn’t win the state’s popular vote.

By agreeing to pool their electoral votes, member states could guarantee that the candidate who wins the popular vote would also win the necessary 270 electoral votes.

Since 2006, every state legislature has considered National Popular Vote legislation. Most with Democratic majorities have passed it.

Maryland and New Jersey became the first states to join the NPV in 2007. The Blue dominos have fallen from there—with one exception.

Hans von Spakovsky is a senior legal fellow at the Heritage Foundation. He says Nevada rejected the NPV because it’s a rural state. And the Electoral College protects its interests. No matter its size, every state is guaranteed at least three electoral votes. If enough rural states get together, they can throw their weight around.

VON SPAKOVSKY: The framers of the Constitution were afraid that if a president was simply elected through the national popular vote, then candidates would simply go to the big cities, the big urban areas. They would ignore the smaller, less populated states. So they came up with the Electoral College system, because it was a way of balancing those interests.

Von Spakovsky says that system also forces presidential candidates to appeal to a geographically diverse swath of the country.

VON SPAKOVSKY: They wanted candidates going to the different regions. They hoped that would lead to candidates who are trying to appeal to a greater, more widespread cross section of the American public.

But Scott Drexel with National Popular Vote says today’s campaigns don’t appeal to that widespread cross section. Instead, they spend their time in a handful of swing states.

DREXEL: The way the current system works means that a big blue state like Illinois, is as ignored as a big red state, like Texas.

Trent England is the founder of Save Our States, an organization that advocates for the current Electoral College. He disagrees. He says the Electoral College is what pushes both parties to choose candidates that appeal to voters in more places.

ENGLAND: In the 2016 election, the Electoral College system says to the Democrats, in effect, you have to broaden your appeal, you have to be able to reach out to more groups of Americans in more states in order to win. The Democrats nominated Joe Biden, because they believe that he would be more appealing to Americans outside of the cities.

Right now, with its 15 member states and the District of Columbia, the National Popular Vote compact has 196 electoral votes. Advocates say they only need 74 more for the system to take effect.

But Save Our State’s Trent England and Heritage’s Hans von Spakovsky have doubts about whether the movement is even legal.

VON SPAKOVSKY: The Constitution requires that state compacts be approved by Congress. So I don’t think it can go in effect without it.

Scott Drexel says because the NPV doesn’t abolish the Electoral College or amend the Constitution, it doesn’t need congressional approval.

DREXEL: Article 2 Section 1 of the Constitution gives states plenary authority to determine how their electoral votes are awarded. So doing this on the state level is the constitutionally appropriate, historically consistent method of making this change.

Even if the NPV could survive a legal challenge, could it survive its own success? The first time voters in reliably blue Colorado have to watch their electors cast ballots for a Republican candidate, they might rethink the benefits of changing the electoral college rules.

(John Amis/Atlanta Journal &amp; Constitution via AP) An election worker places a ballot in a counted bin during a hand recount of Presidential votes on Sunday, Nov. 15, 2020 in Marietta, Ga.