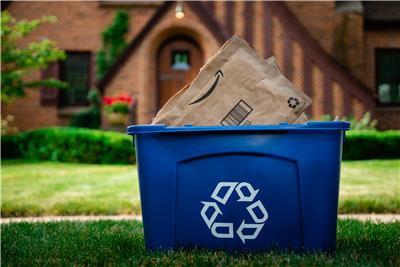 MARY REICHARD, HOST: Coming up next on The World and Everything in It: Maybe it’s time to rethink recycling.

Americans threw out 260 million tons of trash in 2015, according to the EPA’s latest figures. If that sounds like a lot, that’s because, well, it’s a lot. It breaks down to every person in the United States producing nearly four and a half pounds of garbage every day.

Now, not all of that trash ended up in a landfill. Americans recycled about a pound of that four and a half pounds of garbage.

NICK EICHER, HOST: In the past, recycling programs in the United States typically relied on China. That country imported used materials like plastic, glass and aluminum. But in 2016, China said no more to plastics and paper found in magazines and junk mail. The ban went into effect last year.

Now, with nowhere else to go, plastics and paper are piling up in American landfills or recycling centers. But some argue that isn’t necessarily bad. Here’s WORLD Radio’s Sarah Schweinsberg.

LOPEZ: So I’ve been picking up recycling for almost 10 years, I would say.

Lopez says over the past decade, he’s seen the popularity of the recycling program grow here.

LOPEZ: I think most of the people do recycle, and most of the time when we pick up the cans, they’re mostly loaded. So they’re not like halfway empty.

Lopez and his company collect 22,000 tons of recyclables every year.

Pam Roberts is the district’s sanitation executive director. She says even as Salt Lake County collects more materials than ever, the cost of recycling is higher than ever.

ROBERTS: We started having to pay as a district, so our costs went up. It’s more than doubled sometimes for recycling to go for processing, then we pay at the landfill.

Since China stopped accepting plastics in 2016, it costs twice as much to recycle anything versus taking recyclables to a landfill. It’s almost $70 a ton to recycle and $35 a ton to dump it. That’s because without China there’s no longer a market for plastics and paper. And that means increased labor costs for U.S. processing plants who now have to sort these materials out before sending other recyclables to China.

Despite these bad economics, Pam Roberts says the Wasatch Front district won’t stop recycling. Instead it’s raising the program fee by $1.50 per resident.

But some municipalities don’t see it that way. More cities and counties are either dumping more recyclables in landfills or just canceling recycling programs altogether.

Thomas Kinnaman is an economics professor at Bucknell University who researches recycling. He argues keeping plastic here in the United States may not be a bad thing.

KINNAMAN: When it gets to places like China that don’t have the same environmental safeguards in place that we have in the United States, the traditional standard of what to do with waste is to dump it at sea.

Kinnaman says better to have a plastic bottle in a high-tech landfill than floating in the ocean. He also argues it doesn’t make economic or environmental sense to recycle plastics. He points to costs like the amount of water used to decontaminate plastic, transporting plastic, and the chemical process of turning plastic into a new product. Those costs outweigh the benefits.

Kinnaman says that isn’t true of all materials like aluminum, cardboard and some forms of paper—but it is for plastic.

KINNAMAN: The calculus changes for things like plastic and glass. So the point is we become fixated on overall goal. And really we should be looking at each material as its own thing.

Kinnaman also says a better overall focus should be on reducing the creation of plastics in the first place.

In the meantime, people like Pam Osborne aren’t giving up on recycling plastics and paper. She’s the executive director of recycling group Keep Northern Illinois Beautiful. She says over the past year, the group has accumulated a mountain of material.

OSBORNE: We have 12 tons sitting in our yard and I’m sure other recycle centers have a lot more than that. Almost everybody is storing it now because there’s no market for it.

But instead of sending that pile off to a landfill, Osborne says she’s letting it grow and using it as a teaching tool.

OSBORNE: It’s a conversation piece that gets us talking about plastic.

Osborne isn’t sure how large the mound will become before there’s a new demand for items like used plastics. But she feels confident that someday soon, someone will come up with a cost-effective demand for them or an altogether alternative.

OSBORNE: The youth of today, they’re not going to live in a world where they’re just going to be buried in plastic. They’re going to find a solution and we’re going to have some talented people that’ll come up with solutions that we can probably won’t even think about.

Really appreciate this information. The focus on plastics was especially interesting. You guys always do the most reporting on areas I don&#8217;t hear or read anywhere else.