Republicans give HR1 a vote of no confidence

WORLD Radio - Republicans give HR1 a vote of no confidence 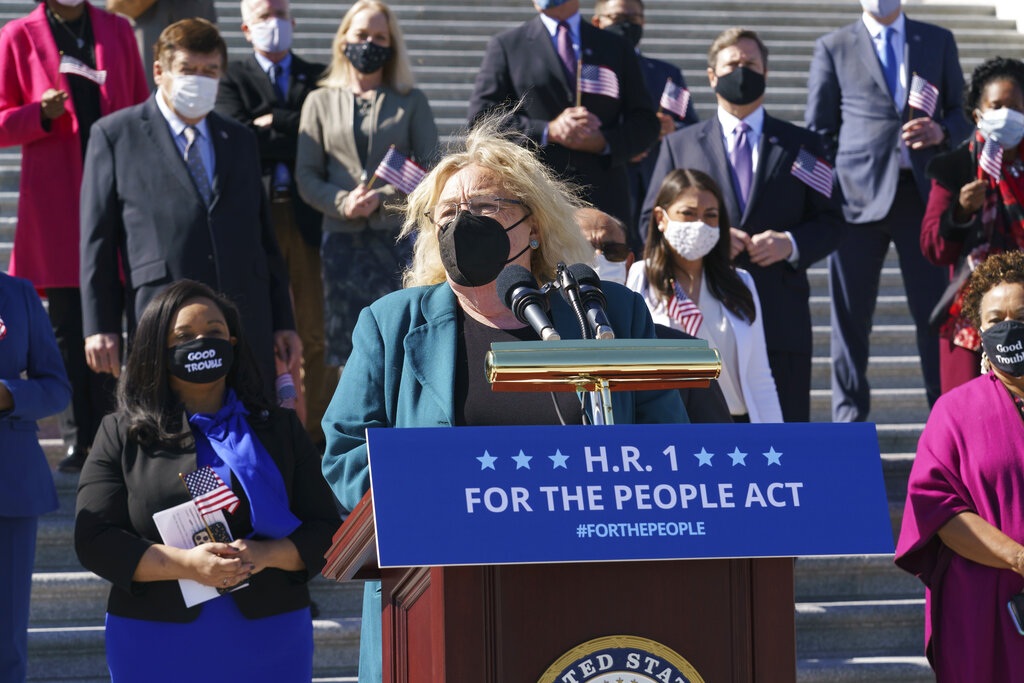 You’re listening to WORLD Radio and we’re so glad to have you along with us today. Good morning, I’m Mary Reichard.

NICK EICHER, HOST: And I’m Nick Eicher. First up on The World and Everything in It: election reform.

After former President Trump’s 2016 win, Democrats argued Russian meddling compromised the integrity of the election. Then, in 2020, after President Biden’s win, Trump argued voter fraud stole the election from him.

REICHARD: In the wake of two contentious presidential elections, House Democrats have passed a sweeping bill to regulate them. A measure Republicans say will only further weaken Americans’ trust. WORLD’S Sarah Schweinsberg reports.

SARAH SCHWEINSBERG, REPORTER: The bill is called H.R.1 or the “For the People Act of 2021.” Democrats approved the measure with a 10-vote margin.

Here are some of the most significant changes. H.R. 1 would require states to automatically register people to vote, unless they intentionally opt out.

It would guarantee voters same-day registration on Election Day. And it would require states to allow at least 15 days of early voting for federal elections.

It would ban state voter ID laws. Voters could cast ballots as long as they sign a statement verifying their identity.

The bill compels states to send no-fault absentee ballots and requires them to accept mail-in ballots up to 10 days after an election.

Congresswoman Zoe Lofgren of California said during the pandemic many states implemented these policies and, as a result, saw record voter turnout.

LOFGREN: More Republicans voted, more Democrats voted. And you know who won? The American people won. Because when people participate and own their own government, that’s what we need in this country.

CRENSHAW: When people can see the faults in the process whether it’s ballots at the wrong house or careless validation processes, they believe people are cheating. You can’t just dismiss that. We have to fix that, but instead this bill makes permanent the problematic election practices that cause distrust.

H.R.1 makes many other big changes. It would require states to restore the ability of felons to vote once their sentence is complete.

In an effort to do away with gerrymandering, the law would mandate that independent state commissions draw up congressional districts instead of legislatures.

It would force super PACS to disclose their donors publicly.

Democrats and some voting rights advocates say American elections aren’t trustworthy because they aren’t accessible enough, especially for minorities. They say H.R. 1 would make voting as easy as possible for as many people as possible.

KUMAR: I think more than anything, it provides a real flexibility through mail in voting. It allows people to to participate. It encourages automatic voter registration. This idea that we have, everybody has to vote on Tuesday is antiquated because we have a whole subset of the population that their nine to five start at seven at night and they don’t get off until three or four in the morning, right. And so this is actually being very aligned with and in tune with how Americans actually conduct their life and their business and their participation.

But election security advocates say the proposed changes in H.R. 1 don’t come with enough safeguards to ensure that only eligible citizens vote.

MCCARTHY: Madam speaker, Democrats call H.R. 1 For the People Act. But it really should be called For the Politicians Act. It’s not designed to protect Americans who vote. It’s designed to put a thumb on the scale in every election in America so that Democrats can turn a temporary majority into a permanent control.

Adam Carrington is a political science professor at Hillsdale College. He says both Democrat concerns about accessibility and Republican worries about election security are valid. And it is possible to advocate for both. But not in such a massive bill rushed to the floor.

CARRINGTON: I think that would be the compromise bill, something that respects both Republican concerns about protecting against fraud and respects Democrat concerns about broadening the electoral process…

Carrington says there’s another problem with H.R. 1: It oversteps the Constitution by taking control of elections away from states and giving it to the federal government.

CARRINGTON: The baseline of the Constitution is that these are supposed to be state run. And yes, Article 1, Section 4 allows Congress to step in and, and do what I would call quality control, to make sure that excesses are curbed and and really blatant bad things aren’t done. But I think that’s what it’s supposed to be. It’s not supposed to be them taking it over.

John Fortier is an election reform scholar at the American Enterprise Institute. He says centralizing elections would sow more doubt than confidence in elections.

FORTIER: Many people worry if we had everything right at the federal level, well, a president running for office would be in charge of the election administration system. An outside influence could cause real havoc, rather than sort of more episodic problems. And so I do think there is some value in having a decentralized system. But on the details we could talk about where perhaps, you know, some more standardization or some more coordination of the states would be helpful.

But Republicans argue debates over election laws should take place in states—not in Washington D.C.

H.R. 1 has little chance of becoming law because Senate Democrats don’t have the 60 votes needed to pass it. But the bill offers a detailed roadmap for where Democrats will keep pushing for change.

(AP Photo/J. Scott Applewhite) Rep. Zoe Lofgren, D-Calif., makes remarks as the Democratic Caucus gathers to address reporters on H.R. 1, the For the People Act of 2021, at the Capitol in Washington, Wednesday, March 3, 2021.