Remembering the day the wall fell 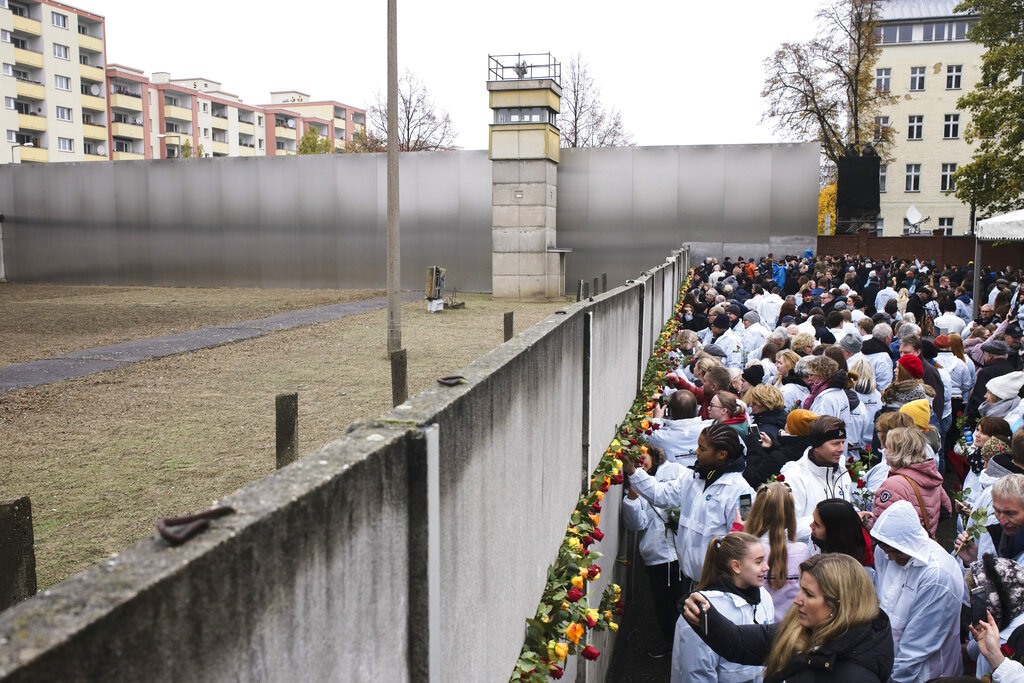 MEGAN BASHAM, HOST: Today is Wednesday, November 13th. So glad you’ve joined us today for The World and Everything in It. Good morning! I’m Megan Basham.

MARY REICHARD, HOST: And I’m Mary Reichard. Thirty years ago, the fall of the Berlin Wall.

Communist East Germany erected the wall in an attempt to keep their people in.

And for the most part, they succeeded, although more than 5,000 Germans did manage to escape. At least 100 others died trying.

BASHAM: But when it fell, Berlin was once again united. And more than that, it signaled political changes all across Eastern Europe.

WORLD Radio correspondent Jenny Lind Schmitt was studying abroad in 1989 and had a front row seat to the historic event.

JENNY LIND SCHMITT: Thirty years ago I was a college student studying abroad. On November 9, 19-89, there was a single, unforgettable headline:

PETER JENNINGS ABC NEWS NOVEMBER 9, 1989: I’m Peter Jennings in New York. Just a short while ago astonishing news from East Germany where the East German authorities have said in essence that the Berlin Wall doesn’t mean anything anymore.

The German students in my classes at the University of Geneva arrived the next morning dumbfounded. All of them had relatives in East Germany they had never met. Most of them made plans to go directly home for family reunions.

In Berlin, thousands of East Germans drove across the border to discover the West…

NEWSCAST: Here, as everywhere else, it is one breathtaking moment after another. The new arrivals in their tiny smoke-belching cars were greeted like athletes, patted on the back and cheered forward.

…and thousands of hammers started chipping away at the wall.

Over the next weeks, my classes on modern European history paled in comparison to the events unfolding in the headlines every day. Hungary’s Socialist Workers’ Party disbanded. The Czechoslovakian Communist party government resigned, and playwright Vaclav Havel was made president.

In late December, as Romania overthrew its hardline dictator, the world made plans to bring in the New Year in Berlin.

I boarded a train with friends and joined the half-million people streaming to Berlin. We gathered at Brandenburg Gate, where two years before President Reagan had given his speech in front of the Berlin Wall. We climbed on top of it. I wrote in my journal:

JENNY: We wandered to the wall and Brandenburger Tor and ended up climbing on top of it until East German guards had to gently help us down. It is so bizarre to think that perhaps three or four months ago if we had climbed up on the Berlin Wall these same guards would have shot us.

At midnight on New Year’s Eve, the crowd counted down in unison on both sides of the wall. At the top of Brandenburg Gate someone pulled down the East German flag, tore it into shreds and then hoisted it again to wild cheers.

East German guards opened a gap in the wall, and the crowd conga-line danced through.

JENNY: After awhile we walked to East Berlin—just walked… We met “Mike,” an East German guy who was excited to meet Americans and escorted us through East Berlin to the Parliamentary Palace of the Deutsche Demokratische Republik, where we walked straight in the front door and onto the dance floor.

That party at communist headquarters was the gloomiest New Year’s Party I’ve ever attended, before or since. It was a perfect metaphor: The old guard going through the motions, trying to save face, while youth and change danced in and crashed the party.

It was a new year, a new decade, a new era. TIME Magazine wrote that it was—quote—“one of those rare times when the tectonic plates of history shift beneath men’s feet, and nothing after is quite the same.”

And things weren’t the same after. Germany reunified less than a year later. A year after that the USSR ceased to exist. The end of the communist states in Eastern Europe gave freedom to millions.

Conflict didn’t disappear though. The breakup of Yugoslavia led to war in Bosnia, where 100,000 people died and tensions there still simmer.

Russia reemerged as a threat. And in embracing the bounties of the West, many who formerly lived under communist atheism exchanged it for the god of materialism.

But the fall of communism in Europe also gave unprecedented opportunity to spread the gospel. It was an answer to years of prayer by faithful believers on both sides of the Iron Curtain. And in each of the former Eastern bloc countries the evangelical church has grown.

On New Year’s Day, 1990, I walked back through East Berlin. Blocky communist architecture mingled with old baroque churches and classical statues. But there were still buildings bombed out from World War II.

JENNY: In West Berlin you only see modern superstructures. And then one wonders, if Germany was reunited and if Berlin was the capital, what would happen to it? Could it be beautiful again?

This week, Berlin held celebrations marking the 30th anniversary of the end of communism.

Pieces of the infamous wall have made their way around the world, to places as far flung as Las Vegas, Jamaica, and the Vatican. Some sections stayed in Berlin—a memorial to an era and its end. And three small pieces of the Berlin Wall are on a shelf in my living room.

(AP Photo/Markus Schreiber) People stuck flowers in remains of the Berlin Wall during a commemoration ceremony to celebrate the 30th anniversary of the fall of the Berlin Wall at the Wall memorial site at Bernauer Strasse in Berlin, Saturday, Nov. 9, 2019.