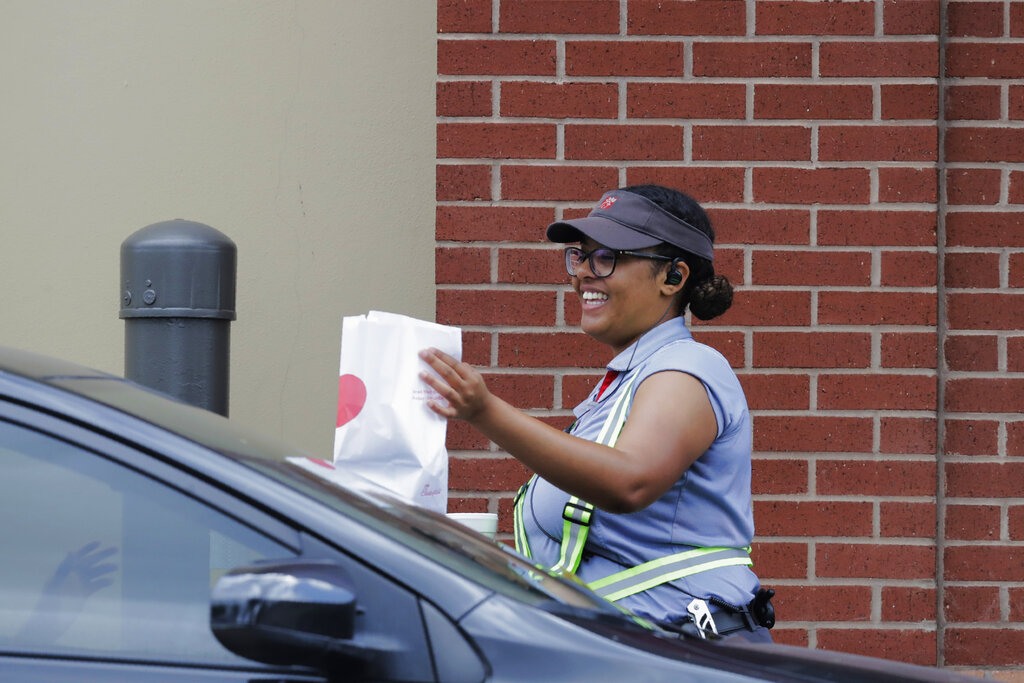 MARY REICHARD, HOST: Coming up next on The World and Everything in It: restaurants and the coronavirus.

Across the country, governors have ordered non-essential businesses to close. That’s led to layoffs and a record number of Americans filing for unemployment benefits.

AUDIO: [Sound of window rolling down]

EMPLOYEE: Can I have a name for your order?

EMPLOYEE: Sarah, what can I get for you today?

The employees at this Layton, Utah, location walk along the cars taking orders. They wear plastic gloves and keep at least a foot from the cars.

Employees have customers swipe their own credit cards through the mobile card readers.

EMPLOYEE: You swipe the card with the strip facing down across the top for me.

These precautions, along with keeping the drive through open, is helping the franchise make up for sales lost to closed dining rooms. Other restaurants are implementing similar strategies.

Rebecca Ochoa and her husband own the Fat Cat Pizza Company in Strafford, Missouri. They only opened their sit-down pizzeria in September. That means they don’t have large cash reserves to ride out the shut-down. So they’ve converted their dine-in menu to carry-out and delivery.

OCHOA: We are lowering prices, we are doing bundles of like pizza, salad, garlic bread, that kind of stuff. Just to kind make things a little bit more affordable for people.

Despite adapting the menu and strong community support, the restaurant has lost 30 percent of its sales. To stay afloat, the Ochoas let six employees go.

OCHOA: We told them we don’t have hours right now, and then as soon as all of this is over we will put them back to work as quickly as possible. Primarily my husband has been running it by himself.

But some restaurants struggle to convert to a take-out menu. John Hampton owns the Black Stag Brewery and Pub in Lawrence, Kansas.

HAMPTON: We sell things like steaks, pasta, seafood and a lot of that kind of stuff.

Lawrence, Kansas, is home to Kansas University. The coronavirus sent many of the school’s 30,000 college students home for the rest of the year. With fewer people in town, the cost of keeping the kitchen open for take-out outweighs the potential profits.

And before the coronavirus hit, Hampton put most of the restaurant’s profits toward paying a construction loan. Now, he’s had to let 40 employees go.

HAMPTON: It’s been hard. There’s no money coming in and we are just trying to wait things out and hope that we can reopen the doors as soon as possible. Right now we are looking at disaster loans and Small Business Association loans just to keep the lights on at this point.

Mellissa Fleischut heads the New York Restaurant Association. She says in New York City, the national hotspot for the coronavirus, many people aren’t even ordering takeout.

FLEISCHUT: People are just afraid to leave their house even go get that take out or carry out order.

In places upstate, a restaurant’s ability to survive could come down to the luck of the menu.

FLEISCHUT: Were they doing take out and delivery before, had they previously had that market available to them, how did they let the public know that they were still open. Menu options are a big one. Some of the folks were trying to offer their entire menu for take out when it’s not conducive to that 20-minute drive home have had some problems and have had to readjust.

Fleischut says for those restaurants that haven’t been able to do take-out or delivery successfully, the new $2 trillion stimulus package will help.

The National Restaurant Association says U.S. restaurants employ 15 million people—about 9 percent of the workforce. Right now the association estimates between a third and half of food service employees have already lost their jobs. Many restaurant employees work part-time or multiple jobs, but some depend entirely on one job.

Twenty-three-year-old Saray Neipp is a barista at KuppaJoy, a Christian-owned coffee shop franchise in Fresno, California. She manages one of the franchise’s now-closed shops.

NEIPP:  I had several meltdowns and just like, “Oh man, what am I gonna do?” Because I’m married and we’re also fresh out of college, we have a lot of student debt… and my husband is self-employed, so he gets taxed so much more than we were anticipating.

Thankfully, the franchise also runs two drive-throughs where Neipp is still able to work. But her hours have been cut in half, so she’s also applied for unemployment benefits.

Neipp says her stress levels are high, but she’s also experiencing more generosity from co-workers and customers than ever before.

NEIPP: Luckily, I have some really great co-workers and they called me as soon as they found out and they were like hey do you want some of my hours? There’s been a really… A really big streak of generosity and just kindness from most of our regulars… I’ve been surprised to see lines that ring around the whole parking lot.

(AP Photo/Brynn Anderson) An employee hands out food to a drive thru customer on Tuesday, March 24, 2020, at a Chick-fil-A amid the COVID-19 and coronavirus virus outbreak in Pembroke Pines, Fla.