Ranching at the southern border 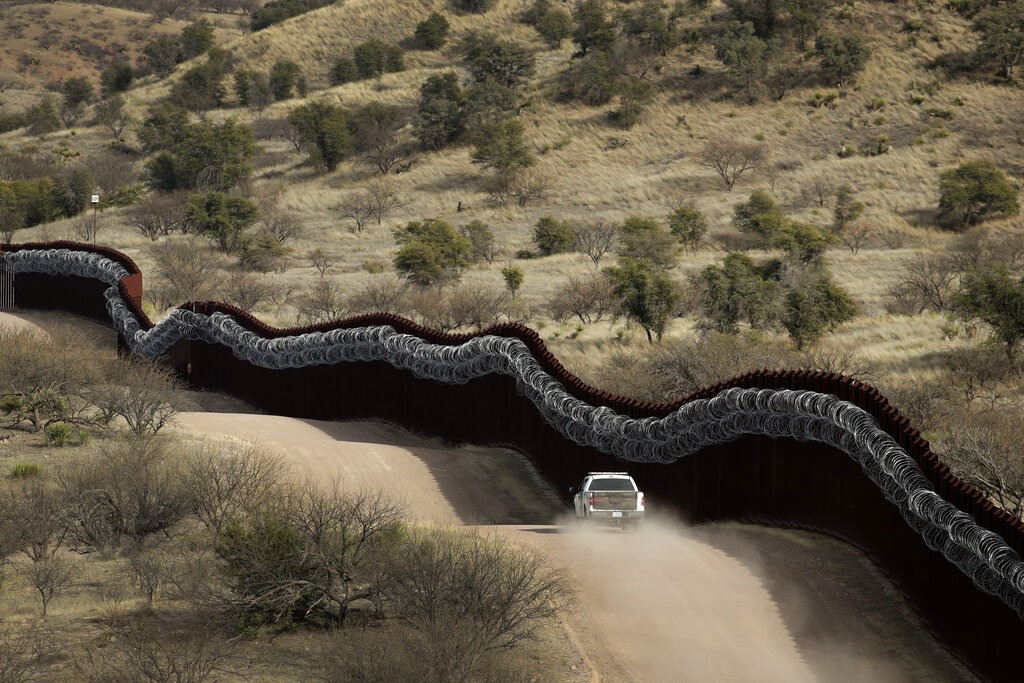 MEGAN BASHAM, HOST: Coming up next on The World and Everything in It: ranchers and the border wall.

MARY REICHARD, HOST: The wall at the southern border is fast becoming reality. The ongoing construction still causes lots of controversy in cities. But what about more remote regions? Do the people who live there think the wall will make life better?

SARAH SCHWEINSBERG, REPORTER: Chance Smith is a rancher and cowboy. He lives 19 miles from the U.S.-Mexico border.

This morning, Smith and two of his children climb into his pickup truck to check on cattle. As Smith turns onto the main highway, he spots a white SUV with a green stripe parked on the side of the road. It’s a border patrol vehicle.

SMITH: He’s supposed to be looking for tracks.

The tracks of migrants crossing the border illegally and the tracks of drug traffickers working for Mexican cartels. It’s easy to disappear in this remote area surrounded by mountains.

SMITH: The ones behind us are the Chiricahua, those in front of us are the Palencinos and those blue mountains off down there to the south are the Sierra Madres in Mexico.

Smith and other ranchers say poor immigration policies and enforcement have let this area become a drug-smuggling corridor.

As he drives, Smith recalls a day four years ago. His wife was outside washing a car when four strangers appeared from the south. They walked through the yard with large backpacks. Smith says they were packing what he calls “dope.”

SMITH: Marijuana is the most common. It’s usually people packing, generally about 40 pound bundles. They are professionals. That’s what they do. And they are in shape.

Smith says everyone around here has similar stories of run-ins with smugglers and migrants.

SMITH: I don’t know of anybody that’s not going to have a story of it.

And so Smith—reluctantly—supports the border wall. He’s reluctant because he says it won’t fix the country’s broken immigration system. But…

SMITH: I’m hoping that it’s a sign and a decision that the people of America are ready to do something about the border and defend it. It is encouraging to a lot of the people on the ground and the people who live here.

We talk in the lobby of Douglas, Arizona’s historic Gadsden Hotel. This border town landmark has hosted many meetings between elected officials and ranchers.

Steven and Tammy Smith say politicians only pay lip service to their concerns while nothing really changes. Seeing the wall go up makes them feel like someone in Washington finally cares.

STEVEN: All of the illegal drugs, the illegal traffic, the human smuggling, the, that doesn’t bother them. And I don’t know what it is, but there’s a huge faction of those people in Washington and they don’t care. Well, Trump is showing them if we have the desire, we can do it. And now he is stepping on their toes, and they’re not liking it.

Tammy Smith says local opposition groups and national media paint ranchers and others here who support the wall as racist or xenophobic. She says that isn’t fair.

Ed Ashurst moved here from northern Arizona 22 years ago to ranch. This morning, he sits at his homemade wood table and pours himself a cup of coffee.

Ashurst has written a book advocating for border security reform. He doesn’t think the border wall will stop illegal activity. There’s already been reports of people climbing over it.

Ashurst says best-methods aside, working to secure the border will be good for the people living on this side of the line and for most living on the other side.

A secure border makes trafficking drugs into the United States more difficult. That would make the cartels less profitable and eventually less powerful. And that’s one step toward giving hope to those looking for a better life.

ASHURST: The good people in Mexico don’t have guns. They don’t have money. They have no power and they have no guns, and they are at the mercy of the outlaws.

(AP Photo/Charlie Riedel, File) In this March 2, 2019 file photo a Customs and Border Control agent patrols on the U.S. side of a razor-wire-covered border wall separating Mexico and Nogales, Ariz.