Does recovering from COVID offer better protection than the vaccine? 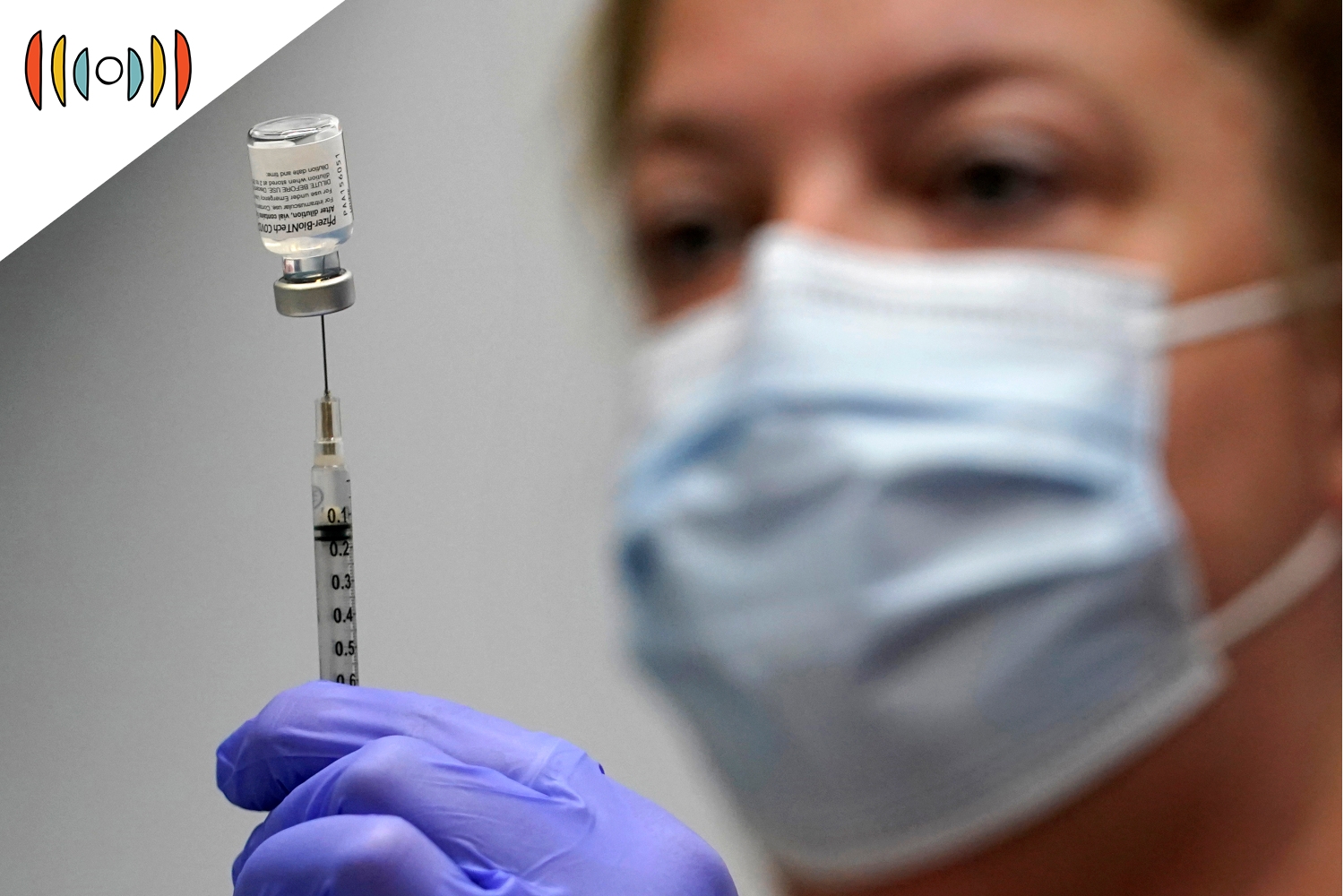 MARY REICHARD, HOST: Coming up next on The World and Everything in It: natural immunity.

It’s hard to know with precision how many Americans so far have had COVID-19. Limited access to testing as well as the virus’s wide-range of symptoms means official counts are probably underestimating the number of Americans who’ve had the virus. One study in the journal Nature published in February estimates that up to 70 percent of the country has had it.

NICK EICHER, HOST: Some of those people say their natural immunity should exempt them from having to get a vaccine. But does natural immunity confer the same protection as the vaccines? WORLD’s Sarah Schweinsberg reports.

SARAH SCHWEINSBERG, REPORTER: A few weeks ago, Rashago Kemp began to feel sick. After a couple of days the 37-year-old’s symptoms worsened.

He got tested. Positive for COVID-19. Kemp got tested for two reasons. He wanted to be responsible, and he wanted documentation that he had the virus. Kemp wants to prove he has natural immunity.

KEMP: I believe that, you know, natural immunity, especially in people that are young and healthy, like myself, is robust.

Kemp hasn’t gotten a COVID-19 vaccine. He might in the future. But for now, he’d like his natural immunity to excuse him from a potential workplace vaccine mandate.

KEMP: I feel like especially with all the breakthrough cases, that my natural immunity is not only equal to but superior to the vaccinations, and I should get some credit for that.

So far, the Centers for Disease Control and Prevention doesn’t want to give people credit for natural immunity. The agency recommends COVID-19 vaccines as the best way to protect against the virus—whether you’ve had it or not.

Many companies, schools, and businesses with vaccine mandates are following that guidance, only allowing vaccines to count as protection from COVID-19. And they’re giving out medical exemptions sparingly.

To back its position, the CDC cites a study it conducted earlier this summer when the Delta variant was not prevalent in the United States. It looked at patients in Kentucky and found that unvaccinated people are more than twice as likely to get reinfected with COVID-19 than those who are fully vaccinated.

Now, as the Delta variant spreads, the CDC says vaccines are also the best protection against the strain—even though new data shows Pfizer’s jab only stops symptoms in 66 percent of vaccinated people. That is instead of the previous 90 percent.

Dr. Amesh Adalja is a senior scholar at the Johns Hopkins University Center for Health Security. He says despite reduced protection against the Delta variant, vaccines are still doing their most important job.

ADALJA: What we know is that our vaccines are holding up against the Delta variant when it comes to what matters: serious disease, hospitalization, and death.

But Dr. Adalja believes natural immunity is worth something.

ADALJA: I'm somebody that advocates people who have had some level of immunity be not considered exactly the same as someone who is not vaccinated at all or has no prior immunity. And there is data to suggest that maybe a single dose of the two dose Pfizer and Moderna vaccines may be sufficient for a person with prior immunity to have as robust immunity as someone that's been vaccinated.

New research also points to the benefits of natural immunity, especially against the Delta variant.

An Oxford University study released this month looked at how the Pfizer and AstraZeneca vaccines fared against the strain. The research concluded that people who had been vaccinated and had been previously infected with COVID-19, had the most protection.

And a new study in Israel that isn’t peer reviewed yet looked at 70,000 COVID-19 patients. Researchers found that patients who just got two doses of the Pfizer vaccine were 6 to 13 times more likely to be reinfected than those with just natural immunity. But, again, the strongest immunity was found in those who had been previously infected and had been given at least one dose of a vaccine.

But some countries are treating natural immunity as equal to vaccines—at least for now. Italy requires a digital green pass to enter public places like restaurants, museums, and gyms. Who's eligible for a pass?

Doug Badger is a public policy analyst at the Heritage Foundation.

BADGER: Two groups of people. One, those who have been vaccinated, and two, those who have certification that they have recovered from the infection within the past six months.

After six months, the country no longer counts a recovered person as immune. Right now, studies disagree over how long natural immunity lasts, as they are also questioning how long vaccine immunity lasts.

Badger says, like Italy,  naturally immune people should also be allowed to function as normal in the United States. But officials here haven’t made documenting natural immunity a priority.

BADGER: So CDC has never encouraged, for example, a doctor to give a recovered patient, a note or some certification or a local public health agency to give the certification that John Doe recovered from COVID as of June 4, 2021. We have our little CDC cards, those of us who have been vaccinated, but we don't have anything that we carry around to document that we've recovered from infection.

That makes it more difficult for schools, hospitals, and businesses to figure out who falls into what categories: never-infected, recovered, and vaccinated.

But recovered COVID-19 patients like Rashago Kemp and experts like Dr. Amesh Adalja at Johns Hopkins say it would be a system worth figuring out.

The elephant in the room for the last year and a half continues to be the almost complete lack in finding, promoting and utilizing early, out-patient treatment for Covid-19. Does no one think it strange that virtually all cheap, early, outpatients treatment options that have shown promise have been quickly shot down, ignored or downplayed by all the influential medical organization ? Even the expensive but seemingly effective monoclonal treatment if barely mentioned. Why? Shouldn't we have more tools in our belts right now than vaccines and masks?

We certainly need both. Vaccines and masks are helpful in that they reduce the spread of disease. Like many adverse health conditions, the best option is to not get sick in the first place. But they're not 100% effective - hence treatment. I don't understand why prevention and treatment has been pitted against each other by the left wing and right wing media outlets. Another absurd manifestation of our polarized times, I reckon.

There is a growing body of literature that describes two kinds of COVID antibodies: serum (systemic) and mucosal. Evidently, the vaccines confer serum antibodies, which are most effective at reducing the severity of symptoms but less effective at preventing the disease entirely. Mucosal antibodies, conversely, tend to be more effective at preventing contraction of the disease but less so in reducing symptom severity in the event that it is contracted. Mucosal antibodies are conferred by actually recovering from COVID, but there is also evidence of some medical personnel heavily involved over time with COVID patients who developed mucosal antibodies without ever testing positive for the disease. How long does either type of antibodies last? Who knows?

I am excited to hear that natural COVID-19 immunity is robust. What a lot of people celebrating this study are trying to imply is that it is better to catch COVID than to get the vaccine, or, similarly, that the vaccine is more dangerous than natural COVID.

A vaccine is still a far safer way to immunity than catching natural COVID.

You should look more deeply into the statistic for the Kentucky study. The “twice as likely” talking point regarding vaccine immunity vs natural immunity sounds ominous, but the actual numbers are something like 1 chance in 1000 vs 2 chances in 1000. So, yeah. Not wrong, just misleading and not helpful.

I actually like the idea of vaccine passports a lot more than vaccine mandates, but either way they should absolutely accommodate people with natural immunity, especially in light of the new study from Israel. The CDC is loosing a lot of credibility and respect by ignoring natural immunity.

Once again, TWAE is pushing the idea that it's someone else's (government) job to protect people (me) from COVID-19 , upholding the idea that immunity passports are a good idea and that being considered immune is a superior status symbol. It seems there has been very little acknowledgement that the government is over-stepping its enumerated powers in requiring and allowing others to require the vaccination to receive service. While it is a Christian's responsibility, reasonable service, to give up voluntary rights in deference and love for each other, that does not ask the Christian to capitulate to government tyranny. There's no place in our Constitution that provides for this power to control people's lives in the name of health, safety, and tolerance.

But the CDC is running the show right now. Local governments everywhere, as well as corporations and medical organizations, are being heavily pressured to do whatever the CDC says or else be accused of being "anti-vax" or anti-science, uncaring or just outright grandma-killers.