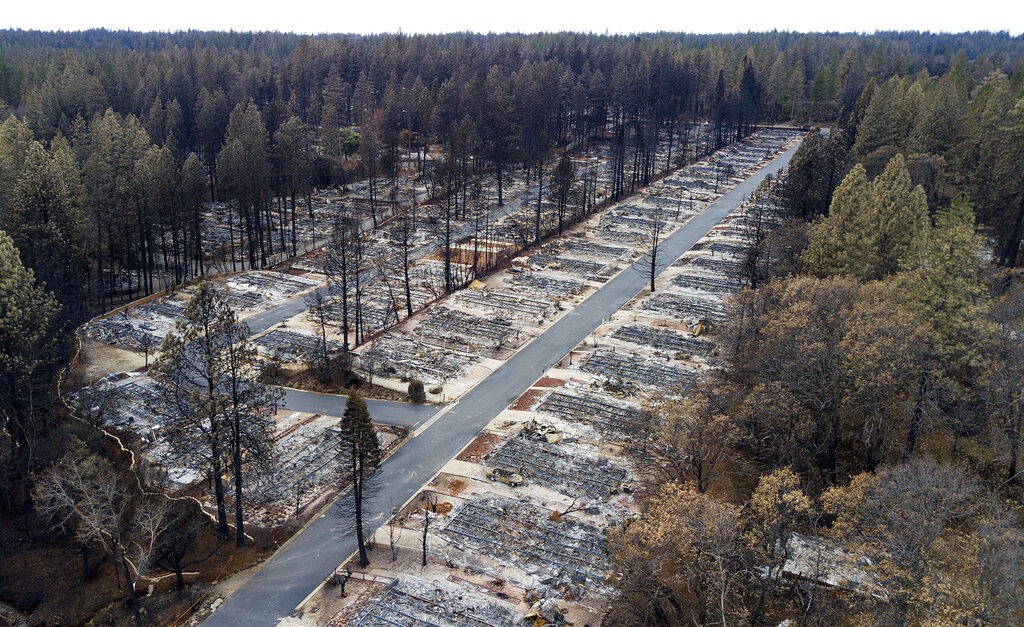 Thank you for turning to WORLD Radio to help start your Thanksgiving Day.

MARY REICHARD, HOST: And I’m Mary Reichard. Coming next on The World and Everything in It: the last installment in our three-part serial on the fire that destroyed Paradise, California, two years ago this month.

EICHER: Yesterday, we left off as the residents of Paradise desperately tried to escape the wildfire that ended up killing 85 people and burning down more than 18,000 structures.

Today, WORLD’s Sarah Schweinsberg returns with the rest of the story, and how Paradise is recovering.

Tomilee Deatherage was the first to make it down to safety in Chico. She saw people lining the side of the highway—all trying to spot the cars of family and friends.

DEATHERAGE: People were looking for loved ones…

That afternoon Chris, Andy and Isaac Robins reunited at the Lowe’s parking lot in Chico.

The Harps came out into the light at 12:30—three hours after leaving home. At the end of the Skyway, Donnie Harp saw a friend who was a police officer directing traffic.

DONNIE HARP: And so as we go by, he’s doing the waving, and he blew me a kiss. And I kind of lost it at that point too. Because, you know, he knew we were safe.

It’s been two years since the fire. The Robins family drives through town.

There’s no more leafy canopy of trees. There’s matchsticks with branches that look like frazzled hair.

ANDY ROBINS: You look out through there 80% that’s dead.

CHRIS ROBINS: This was a school. The gold nugget museum. This was our Paradise Elementary School, which all burned.

Hundreds of crews from the government and organizations like Samaritan’s Purse hauled tons of debris out of town. Issac Robins says before all that work, Paradise looked like a warzone.

ISAAC ROBINS: There was so much rubble just around and trash that it was crazy. But now it’s just kind of like deserted, empty.

But the fire didn’t take everything. 1,200 homes survived.

As well as some businesses.

CHRIS ROBINS: Pre-fire we did have, which was newer, Starbucks and Dutchbros, and those two both survived, which was probably a huge blessing for all the workers up here…

The Robins say not everyone who used to live up here can come visit. It’s just too painful to relive the memories.

CHRIS ROBINS: A lot of my friends, my co workers, my family, they can’t come up here, and they go into shock. They’re heartbroken.

In the days after the fire, aid for fire survivors flooded into Chico. Clothes, food, and furniture. The Walmart and mall parking lots became makeshift camps.

The Robins’ church lined up an apartment in Chico.

CHRIS ROBINS: Our church knew that we were going to need a place. We’re still in a rental and the apartment.

And family friends took in all eight members of the Harp family.

After the fire, the question quickly became what’s next?

For the Harps things moved quickly. The next day, Donnie and Tanya began looking at real estate in Chico. They found a house for sale at the right price.

Just four days after the fire, the family was in a new home. Friends and family donated furniture.

DONNIE HARP: The Lord made us whole, so fast…it was so amazing to see his hand through so many other hearts.

The Harps were grateful, but they also felt guilty. So many others were living in hotels and campers for months and months.

After living with their daughter for six weeks, the Deatherages moved into an animal-friendly hotel for two months. That was a tough time for Tomilee. She avoided the hotel as much as possible.

DEATHERAGE: We would stay out with friends that had lost their house too. We would try to find restaurants that stay open late, or sit in our cars and talk.

Eventually, the Deatherages found an apartment, but Tomilee wanted to rebuild in Paradise. Yet, she knew it was going to be a long, expensive process. One day, she saw an ad for a house near Paradise. The house looked like one Tomilee had sketched.

DEATHERAGE: You get that you kind of feeling like you’re going to cry because it feels like God did this because I would have never found this.

The Deatherages moved in April 2019—almost six months after the fire.

The families all say they continue to grieve their old lives, their homes, and the things insurance can’t replace.

For the Harp kids, it’s been a slow adjustment to Chico. They miss their home.

ASHLEY HARP: The kitchen was huge. It was open it led to the living room into the dining room.

LOGAN HARP: There was a creek and we used to play down there a lot.

AUDIO: [Family singing “Cannons” “You are holy. Great and mighty. The Moon and the stars, declare who you are.”]

TANYA ROSS-HARP: Music had been a big part of our lives up in Paradise. And continuing that worship creates that feeling of wholeness with us as a group.

26,000 people once called Paradise home. Two years after the fire, only one in five have returned. As for the Robins, they plan on rebuilding. This property has been in the family for nearly 50 years.

They haven’t broken ground on their new home, but soon. They know it’s a long road ahead. But Chris Robin says: it’s worth it.

CHRIS ROBIN: It’s going to be rebuilding from the ground up. And a lot of people look at this as like desert and despair, but I look and there is growth, there is new life coming back. And it will be Paradise again.

EICHER: If you enjoyed Sarah’s story and would like to share it with a friend, next weekend we’re going to release all three parts together in a special stand-alone episode. The long-form version will include additional material we couldn’t fit into this week’s serial presentation. Look for it on this podcast feed next Saturday, December 5th.