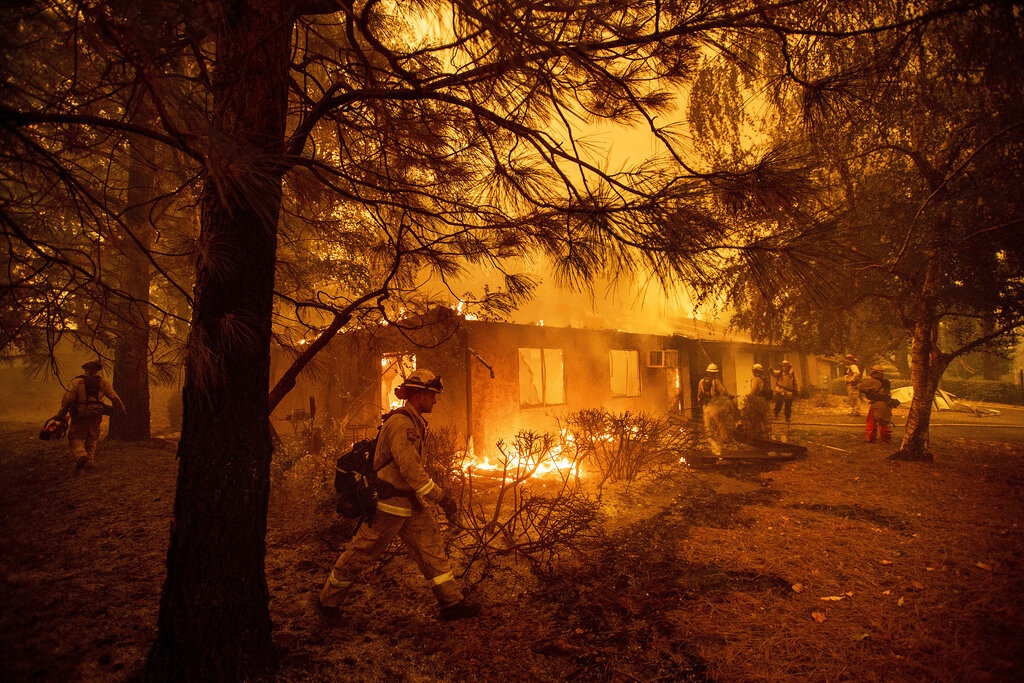 NICK EICHER, HOST: Today is Wednesday, November 25th. Thank you for turning to WORLD Radio to help start your day.

MARY REICHARD, HOST: And I’m Mary Reichard. Coming next on The World and Everything in It: Part 2 of Paradise Lost and Restored.

Yesterday, we met three families from Paradise, California. It’s a town of 26,000 about 90 minutes north of Sacramento.

Today, WORLD’s Sarah Schweinsberg returns with more of her story about the fire that devastated the tight-knit town.

SARAH SCHWEINSBERG, REPORTER: For Paradise resident Tanya Ross-Harp, November 8th started like any other day. At 6:30 in the morning she went outside to see how her new rose bushes were doing.

TANYA ROSS-HARP: So I went out to check on them. And I looked up and saw the first plume of smoke. It looked pretty far away.

Fires in California aren’t uncommon, so Tanya thought there’s nothing to worry about. So the family went about their normal routine. At 7:30 a.m. Tanya took some of their six children to school.

TANYA ROSS-HARP: It was getting smoky. And there were some big, like pieces of ash and everything, but at that point, it was sort of: “Okay, this is different.” But as far as we knew the fire was not in town.

What no one in Paradise knew at the time was the fire was growing, and moving fast.

At 6:15 a.m. that morning, power company PG&E reported an outage about 7 miles northeast of Paradise.

Fourteen minutes later, one of those power lines just off the Camp Creek Road sparked… catching the grass and trees around it on fire. Dispatchers sent out a call to firefighters.

The dry forests and high winds fed the fire. It spread quickly. At some points, the blaze grew by as much as a football field every second. And the wind pushed it toward Paradise.

Tomilee Deatherage went to leave for work at 7:30. The sky was orange to the east. She called a friend to find out if this fire was serious.

DEATHERAGE: And he said it’s far away, so it’s 20 miles, don’t worry about it.

So Deatherage dropped her son off at his golf course job. And she was about to head down to Chico for work when she pulled up next to a city worker.

DEATHERAGE: She had a window down and I said, “Hey, I need to know the truth. Do I need to go home and get my cat?” And she said, “Yes, get up and get your cat, and do it as fast as you can.”

So Deatherage drove back up to her house. Now, the sky was getting dark with an eerie, orange glow.

DEATHERAGE: I literally parked the car, and I run upstairs to get the carrier for the cat and run back down and put the cat in it…

Then her mom called. She said Tomilee’s son, Spencer, was worried because the golf course was on the eastern side of town—closer to the approaching fire. Tomilee had to go get him. She didn’t have time to pack up anything.

DEATHERAGE: I don’t even have a minute because if one minute makes a difference and I get there and it’s too late, I will never never ever forgive myself for the time I took (voice breaks).

Tomilee Deatherage left with her cat and the clothes on her back. As she tried to drive across town to her son…people were starting to panic.

DEATHERAGE: It’s dark. The trees are lighting up so fast. People were running the lights because they were seeing the trees on fire. And so I just became really aggressive because it’s what you have to do.

But traffic still wasn’t moving fast enough. So Tomilee’s husband called Spencer. He told him to take any vehicle…even a golf cart and get out of there. Spencer climbed into his boss’s car and drove to Chico.

DEATHAREDGE: He just said Mom, there were walls of fire. In my mind I’m like, you know you don’t even have your license! I’m so thankful you made it to the bottom.

At 8:30 a.m., Donnie Harp decided to go pick the kids back up from school. When they got home, the family flew into action. At 9:17, Butte County ordered everyone in Paradise to evacuate.

Within an hour, the family packed as many belongings they could into two vehicles. Three kids jumped in with Donnie and the other three with Tanya.

But 26,000 people were all trying to evacuate at once. Traffic was bumper to bumper—inching, crawling along.

It took two hours for Tomilee Deatherage to drive less than one mile.

DEATHERAGE: The smoke was getting really bad at that point… I was trying to figure out how to shut the vents on my car.

And there was another problem. She had started the day with half a tank of gas. But all the idling in traffic had run her down to less than an eighth of a tank. And she still had at least 10 miles to go.

She pulled up next to a gas station and saw her chance.

DEATHERAGE: So I’m getting gas and there’s other people that don’t have money that are trying to get gas. And then I beg somebody to let me back out onto the Skyway. So I get back out into the traffic.

As the Harp family sat in traffic, they started hearing explosions. Propane tanks on grills overheating and bursting.

TANYA ROSS-HARP: From that moment on, I didn’t know if we were going to make it out of town. Being stuck and not knowing is–it’s tough.

Eventually, the Harps pulled their two vehicles onto the Skyway, the main four-lane highway leaving town. As they neared the edge of Paradise, Tanya looked to her right. She saw a telephone poll in gulfed in flames.

TANYA ROSS-HARP: And I heard a crack. And I knew that that telephone pole was going down and it was directly to the side of me.

In the vehicle ahead, Christian and Donnie Harp also noticed the burning telephone pole. Suddenly, Donnie and Christian saw Tanya’s car lunge forward onto the shoulder of the road. Tanya moved her Yukon just in time.

TANYA ROSS-HARP: And the poll just barely nicked the back of the Yukon.

Down in Chico, authorities closed uphill traffic to Paradise. That meant cars leaving Paradise could drive in all four lanes of the Skyway. Donnie Harp says those extra lanes saved many lives that day because even with them, traffic inched along.

DONNIE HARP: When we started heading down, that uphill lane, the flames were blowing, and getting real close to the truck. It was so hot. People’s houses burning, literally everything else was just black.

That’s when Donnie had a stark realization.

DONNIE HARP: The whole trip, I was looking at my mirror, that’s my wife behind me. Is my wife behind me? And all of a sudden the Lord revealed to me right there, that if Tanya stopped, I couldn’t. And realizing that I had three of our six kids with me. If she stopped, I had to keep going.

REICHARD: Tomorrow, the conclusion to Sarah’s story as three families come to terms with loss, and restoration.

(AP Photo/Noah Berger, File) In this Nov. 9, 2018, file photo, firefighters work to keep flames from spreading through the Shadowbrook apartment complex as a wildfire burns through Paradise, Calif.