Americans commemorated the anniversary of 9/11, Ukrainian troops continue a major counteroffensive against Russian forces, workers at Ukraine’s Zaporizhzhia Nuclear Power Plant were able to reconnect it to the electricity grid, King Charles III formally became the sovereign of the UK, a hearse carrying the queen’s flag-draped casket drove slowly through the Scottish countryside, Treasury Secretary Janet Yellen says the U.S. is not in a recession

A woman wipes away tears beside the reflecting pool at the commemoration ceremony on the 21st anniversary of the September 11, 2001, terror attacks on Sunday, Sept. 11, 2022, in New York. Associated Press Photo/Stefan Jeremiah 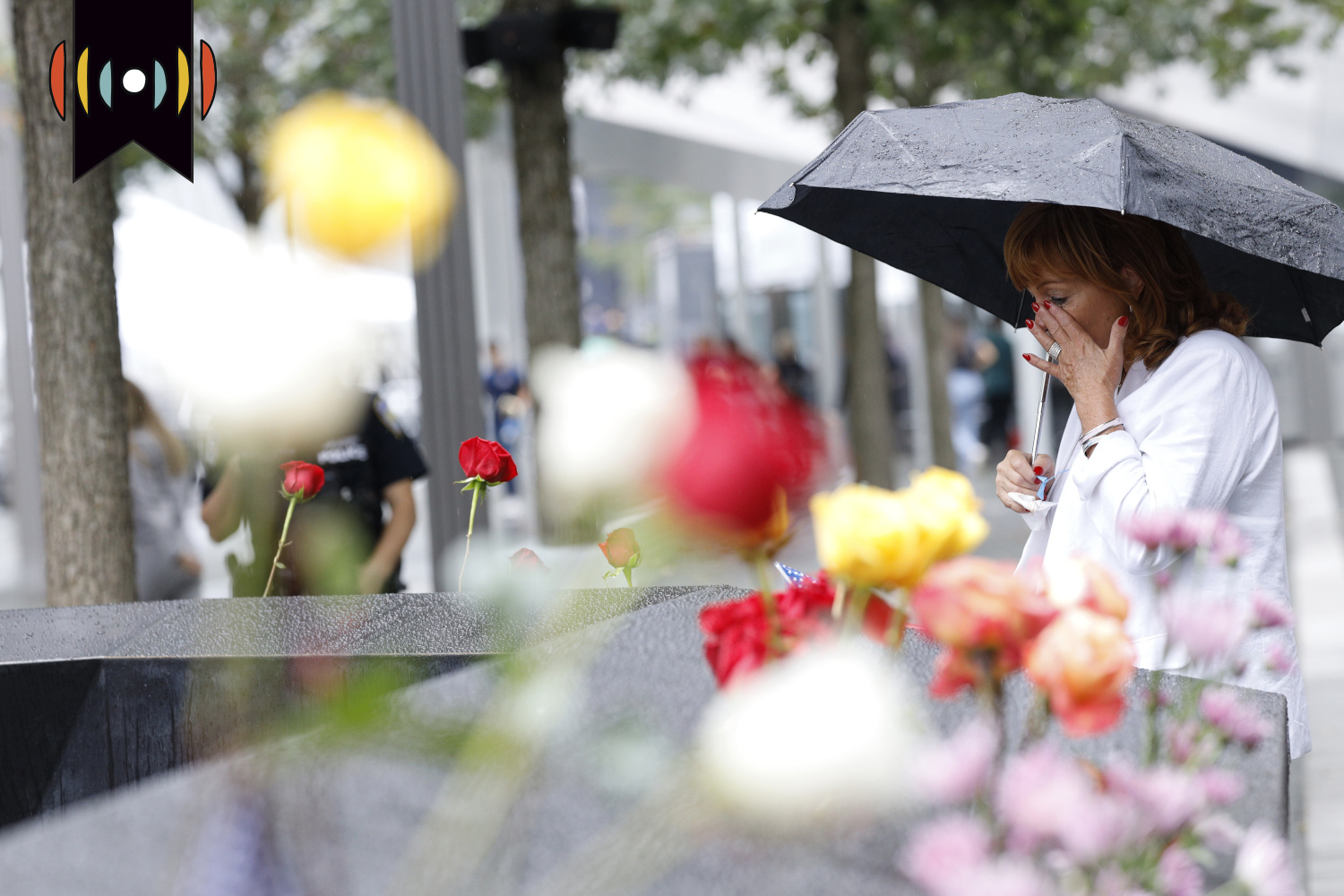 9/11 commemoration » Americans remembered 9/11 on Sunday with tear-choked tributes and promises to “never forget.”

MENTIS: It’s hard for me to talk about it. I lost my sister. She was only 25 years old at the time.

In Washington, President Biden spoke at the Pentagon…

BIDEN: Twenty-one years and we’ve still kept our promise to never forget. We’ll keep the memory of all those precious lives stolen from us.

Biden vowed that the U.S. would continue working to root out terrorist plots.

MARKAROVA: We know this pain and we feel this pain in Ukraine. We know how is it when terrorists attack you at home.

Ukrainian troops continue a major counteroffensive against Russian forces. They carried out successful strikes in the northeastern part of the country on Sunday.

Kyiv's counterattacks forced Moscow to withdraw its troops from parts of the Kharkiv region to keep from being surrounded. In their hasty retreat, they left large numbers of weapons and munitions behind.

In a video address, President Volodymyr Zelenksyy praised his military for retaking the city of Izyum.

Zaporizhzhia » Meantime, workers at Ukraine’s Zaporizhzhia Nuclear Power Plant were able to reconnect it to the electricity grid, allowing engineers to shut down its last operational reactor.

That in an effort to avoid a radiation disaster as fighting continues to rage in the area.

The six-reactor plant lost its outside source of electricity a week ago. Shelling damaged or disconnected all of its power lines.

Operators say shutting down the last reactor is the safest course of action.

King Charles III formally became the sovereign of the UK in a ceremony at Saint-James Palace in London.

He technically ascended to the throne upon the death of his mother, Queen Elizabeth II last week. But the constitutional ceremony is an important part of the process.

The king said he will strive to live up to his mother’s “inspiring example.”

CHARLES: I am deeply aware of the great inheritance and of the duties and heavy responsibilities, which have now passed to me.

The hearse drove past piles of bouquets and other tributes on the six-hour drive from the queen’s castle in Edinburgh.

The queen’s casket will be flown to London tomorrow. It will then be transported to Buckingham Palace on Wednesday to lie in state.

Yellen on recession, gas prices » Is the U.S. economy in a recession?

A recession’s widely defined as two straight quarters of negative growth in GDP. By that definition, the answer is yes. But Treasury Secretary Janet Yellen told CNN on Sunday:

YELLEN: We’re not in a recession. The labor market is exceptionally strong. The unemployment rate is extremely low.

She said as the Federal Reserve raises interest rates to combat soaring inflation, it risks tipping the country into a painful recession.

YELLEN: Of course it’s a concern. The Fed is going to need great skill and also some good luck to achieve what we sometimes call a soft landing.

That would mean taming inflation without a deep economic downturn. She said she hopes that the Fed can still achieve that.

Yellen also cautioned that gas prices could spike this winter amid a crackdown on Russian oil.