First Lady Jill Biden wears a large Ukrainian pin on her jacket as she waves from the top of the steps of her plane at Koscice International Airport in Kosice, Slovakia, Sunday, May 8, 2022. Susan Walsh/Associated Press Photo 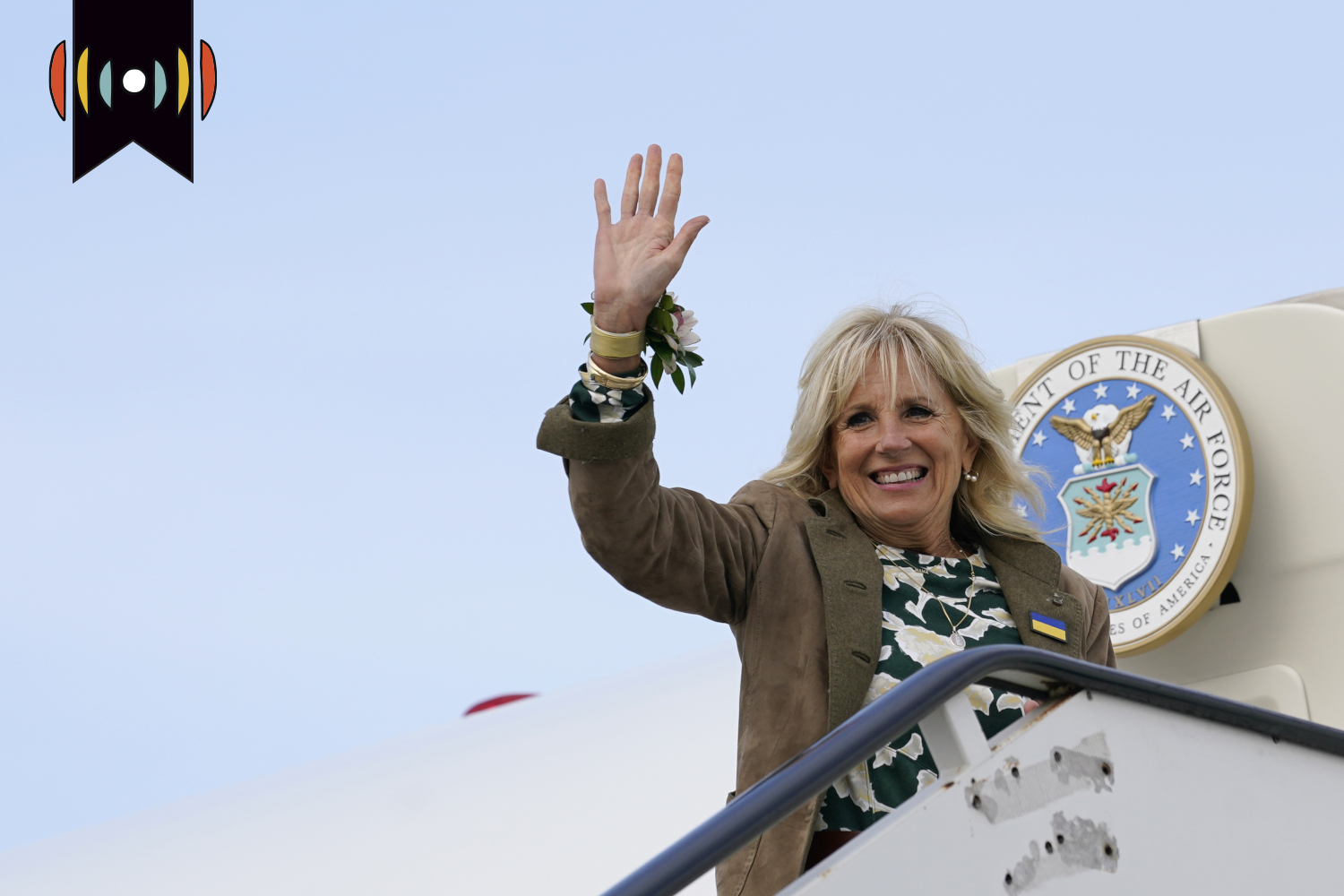 BIDEN: Hello, nice to see you …

She presented a bouquet of Mother’s Day flowers to Olena Zelenska, the wife of President Volodymyr Zelenskyy.

BIDEN: It’s important to share with the Ukrainian people that this war has to stop. And the people of the United States stand with the people of Ukraine.

The first lady became the latest high-profile American to enter Ukraine during the war. It came days after House Speaker Nancy Pelosi led a delegation of lawmakers to the capital of Kyiv.

Russia bombs school killing dozens in Eastern Ukraine » Meanwhile, Russia continues its bombardment in Eastern Ukraine, including the bombing of a school in Zaporizhzhia where nearly 100 civilians were taking shelter.

It’s unclear how many people died in the bombing, but officials say that number will likely top 60.

MARKAROVA: We can count that Putin and imperialistic Russia will do everything bad they can possibly try to do. The question is, are we all prepared, the civilized world, to do everything possible to defend our democracy and freedom.

The penalties include cutting off Western advertising from Russia’s three biggest television stations and more restrictions on Russia’s industrial sector. They will also ban U.S. accounting and consulting firms from providing services to any Russian.

The Biden administration also says the G7 — a group of the world’s top industrialized powers has committed to phasing out or banning the import of Russian oil.

Russia today will hold its annual Victory Day celebration, marking the defeat of Nazi Germany in 1945. Some believe Vladimir Putin might declare victory in Ukraine today. Other top officials say he might issue a formal declaration of war during the event.

Roughly 100 pro-abortion activists showed up at the house of two Supreme Court justices over the weekend in the Washington D.C. area.

They marched to the homes of Justice Brett Kavanaugh and Chief Justice John Roberts. That despite the fact that Roberts is not believed to be on board with reversing Roe v. Wade.

The neighborhood protests came after someone published the home addresses of conservative justices online. That in response to a leaked draft ruling that would overturn the 1973 decision.

Those protests came a day after Justice Clarence Thomas declared that mob rule will not inform the court’s decisions.

Thomas told a judicial conference in Atlanta—quote—“We can’t be an institution that can be bullied into giving you just the outcomes you want.”

Fire at Wisconsin pro-life office investigated as arson » Meantime in Madison, Wisconsin, police are investigating suspected arson at the headquarters of a pro-life group. WORLD’s Josh Schumacher has more.

JOSH SCHUMACHER, REPORTER: Firefighters arrived at the headquarters of Wisconsin Family Action to find a message spray painted on the side of the building. It read, “If abortions aren’t safe then you aren’t either.”

Madison police spokeswoman Stephanie Fryer said the fire was reported shortly after 6 a.m. Sunday morning. No one was injured in the fire.

The president of Wisconsin Family Action Julaine Appling said she considers the fire a—quote—“direct threat against us.” She added, "This is the manifestation of the anger and the lack of tolerance from the pro-abortion people toward those of us who are pro-life.”

Dr. Strange dominates the weekend box office » At the box office, Doctor Strange in the Multiverse of Madness dominated with a huge opening weekend.

TRAILER: I did what I had to do to protect our world. You cannot control everything, Strange.

The latest Marvel blockbuster hauled in around $195 million for the weekend. That made it the second-biggest opening of the pandemic era, trailing only Spider-Man: No Way Home.

The animated adventure The Bad Guys finished second with another $58 million.