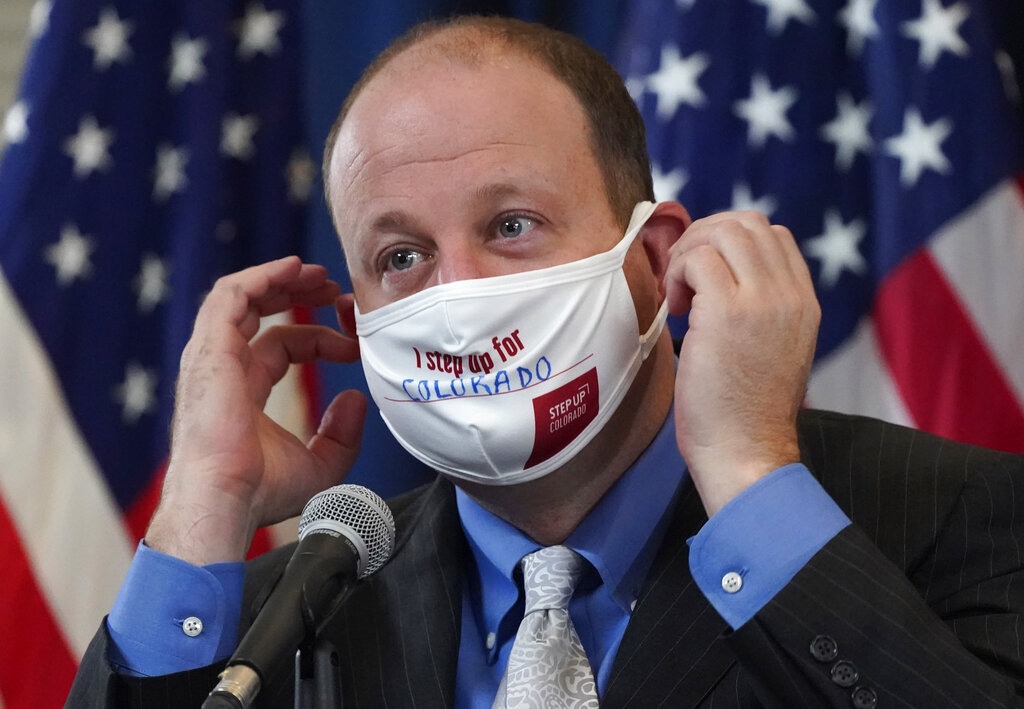 MYRNA BROWN, HOST: Coming up next on The World and Everything in It: mask mandates.

NICK EICHER, HOST: When he enters the White House, Joe Biden may have a difficult time with at least one part of his coronavirus response plan as it’s built on the foundation of a nationwide mask mandate.

But he can’t legally do that. He would have to rely on governors to implement that requirement. Some already have—with mixed results.

KYLE ZIEMNICK: Colorado Governor Jared Polis urged mask-wearing for months after the start of the pandemic. He finally instituted a statewide mask mandate in July.

POLIS: And that’s why today, I’m signing an executive order, that’s effective at midnight tonight, that requires every Coloradan age 10 and up wear a mask or face covering.

Polis pointed to evidence that a mandate would actually make more people wear masks. But a week before making that announcement, he admitted the statewide mandate was more like a request.

POLIS: So the state has minimal capability of enforcing a mask order. For a mask ordinance to work, it has to have local buy-in, meaning the municipal police, and usually a mayor or city council, and in an unincorporated area, buy-in from the county sheriff.

One of those county sheriffs is not buying in. He says it’s not the police’s job to enforce a public health order.

REAMS: So in this particular instance, when the governor issues one of the mandates, what he’s basically trying to do is convince the citizens that they should willfully obey the mandate.

That’s Steve Reams. He’s the sheriff of Weld County in northern Colorado. It’s more conservative than many of its neighbors. But its COVID-19 case count climbed dramatically in November, doubling in the first two and a half weeks.

And Reams estimates about 80 to 90 percent of county residents are wearing masks.

REAMS: They’re voluntarily complying with the order. They just don’t want to be threatened with being ticketed or arrested or anything like that.

Reams argues his department isn’t supposed to enforce public health orders. He’s not alone in believing that. Sheriffs from North Dakota, Nebraska, Mississippi, and many other states say the same. Even if they believe it’s their duty to make people wear masks, Reams says it’s not a priority.

REAMS: You know, we’ve got our hands full, just dealing with the criminal calls we deal with. I don’t see us putting a lot of prioritization into mask enforcement or restaurant closures or anything like that.

Reams has faced a little criticism for his stance. Some Weld County residents told him they want deputies to tell their neighbors to wear masks or go inside. But Reams has also received significant support from his county—and around the country.

REAMS: And then nationally, I’ve gotten a lot of feedback through social media, voicemails, emails here at work. People saying, “Hey, thanks for what you’re doing.” You’re giving my elected official an example to go by.

But even in places where residents object to a mask mandate, local business owners want one.

Graham County in Arizona has less than 40,000 residents. It broke for President Donald Trump by almost 45 percentage points. But last weekend, the county’s Chamber of Commerce sent a letter to its Board of Supervisors asking for a mask mandate.

MORRIS: You know, if we don’t get a hold on the virus here in Graham County, we could lose the open status of our businesses.

Bri Morris is the chamber’s marketing director. She had a baby this spring, and she’s personally struggled with the impact of the virus on her life.

MORRIS: So it’s just stressful, you know, to be unsure and exposing your kid every single day. My husband’s a professor, so he’s already exposed every day to his students.

MORRIS: I don’t think an enforcement thing or a fine or anything like that would go over too well here in Graham County.

So then, what’s the point of having a mandate? Graham County’s businesses desperately want to avoid another lockdown. They believe a mask mandate would give them more authority to ask people to wear face coverings.

MORRIS: It’ll at least give businesses some more strength to say, “Not only does our business require you to wear a mask, but there’s a countywide mask mandate. So we ask you to wear one when you’re in our business.”

The positivity rate measures the number of people who get tested and have the virus. In Graham County, it’s over 30 percent. Arizona recommends a full county shutdown when that number crosses 10 percent. That could be devastating for businesses in Morris’ county.

MORRIS: Well, as the chamber, we obviously want all of our chamber members to be open and thriving and, you know, bringing in their income for their families. We’re a small community.

Americans like Morris are frustrated with the impact of people without masks. Others, like those in Sheriff Reams’ county, don’t want the government involved at all.

REAMS: It’s just a point of frustration. This has been going on for a long time and the citizens are frustrated with it. And so are we in law enforcement. And we just want to see an end.

If President-elect Biden continues to push for a national mandate, he’ll be wading into the midst of this tension. And no matter what he does, as with every political move, some Americans won’t like it.

(AP Photo/David Zalubowski, File) In this Oct. 20, 2020, file photo, Colorado Governor Jared Polis adjusts his face covering bearing the state’s new message to encourage residents to protect against COVID-19 during a news conference about the steady increase in cases of the new coronavirus in the state in Denver.