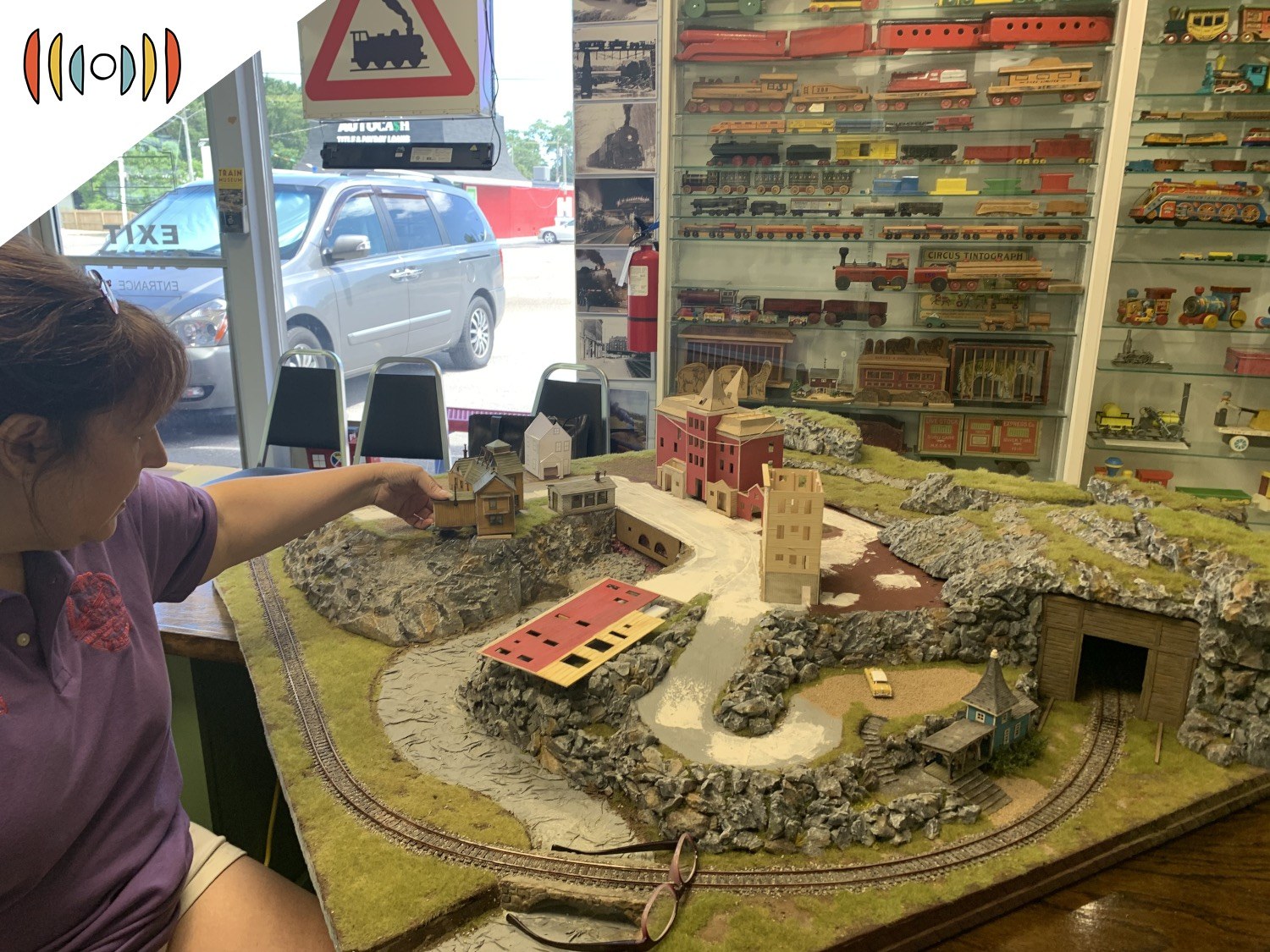 MARY REICHARD, HOST: Today is Tuesday, July 27th. Thank you for turning to WORLD Radio to help start your day.

Coming next on The World and Everything in It: another in our ongoing series, What Do People Do All Day?

Today we meet a modeler. Now, if you're thinking modeling as in fashion, that’s not quite it. This is about scenery design. In particular, scenery for model trains. Think tiny details—right down to weathered tracks and barnacles on train trestles.

REICHARD: Bringing railroads down a size is the work not only of carpenters and electricians, but of artists, too. Good ones. Here’s WORLD Senior Correspondent Kim Henderson with the story.

KIM HENDERSON, SENIOR CORRESPONDENT: The beach brings tourists to Gulfport, Mississippi, by the boatload. But when they’ve had enough fun in the sun, an increasing number of them visit the Mississippi Coast Model Railroad Museum.

CLERK: And we have one of our model makers in today, Miss Wendy . . .

Miss Wendy—or Wendy Pigott—has a room where she makes scenery that goes behind, beneath, and around model trains. And brings them to life.

PIGOTT: I always got a kick out of seeing something that looked real, but was really tiny. I've just always loved little things.

When Pigott brought her grandchildren to the museum six years ago, she saw some exhibits she wanted to get her hands on. Now she has her own key, and keeps a blow dryer and paintbrush in tow.

PIGOTT: I use the blow dryer to speed up the process, so I don't have to wait so long for the paint to dry. And I'm just taking the shine off of this corrugated metal. I will rust it up and trim out this building with it to give it an old, dirty rusty look.

Just one small part of what will be an authentic-as-possible fishing village scene.

PIGOTT: Some things are kits and others are not. Here's a building I just made out of scrap material. So, the paper building over there I designed on my computer. It's a prototype, a mock-up . . .

But Pigott isn’t just a model maker. She’s a magic maker, the kind that has kids shaking with excitement.

Most visitors have no idea of the work that goes into what they come to ooh and ahh over. Consider the grass. In modeler lingo, it’s “a base layer of vegetation.”

PIGOTT: I glue real dirt down. And when that's completely dry, then I'll take and put patches of glue where I want the static grass. I use an electric static applicator to make the grass stand up, and that's why it feels so real.

Pigott’s sage green Martha Stewart craft chest may seem a little out of place here, but the drawers are perfect . . . carefully configured to contain everything from bottle rocket sticks to fabric scraps. That’s right. Making things miniature AND realistic is an art. How do you craft chain link fencing at HO scale—when a locomotive is four inches long?

From bridal veil tulle, of course.

PIGOTT: I have an actual little lumber yard of scale lumber. I have from walls of siding all the way down to single one by two scale lumber boards.

She also has scale rulers to do micro math and some handy devices for cutting.

PIGOTT: Here’s the tiny little bitty chop saw. I know, isn't that hysterical? And I also have a table saw. It has the tilt blade and everything just like a real big table saw, but it is miniaturized.

These tools create masterpieces, like her tiny boat-building shop.

PIGOTT: We even have blueprints for boats on the workstations. There's sawdust on the floor. Every book was painted and loaded on that shelf. Yes. (laughs) All the little cans of paint and everything on the shelves in there, that's all hand done.

Pigott has a background in drafting and blueprints, but YouTube is where she learned her modeling skills. She’s set her sights on achieving the rank of master modeler, which involves several steps of demonstrated proficiency. Museum colleagues like Michael Hesser think she’s already there.

Pigott says she’ll be satisfied when her work matches that of a recent donation to the museum. It’s an over-the-top, room-sized display that’s insured for half a million dollars. But it’s the vintage scenery details—high realism done by professional modelers and artists—that interests Pigott.

PIGOTT: Let’s see. The rock faces, the landscaping, the greenery. It’s been a while since I’ve been over here. But I’m thinking my stuff could maybe fit in over here (laughs)

For Pigott, modeling is relaxing, therapeutic. But unlike many who share her hobby, she’s not tucked away down in a basement. The best part is doing her thing in front of museum crowds.

PIGOTT: Everyone who comes through is coming on vacation or for fun. So they're always uplifted, in a good mood. And so it's a very positive, happy environment, which I think is good and healthy for everyone.

VISTOR: We had a great day. Thank you. (Wendy: Thank you.)