Andrea Luster, left, and Sheri Frankum traveled an hour and a half to the Houston Planned Parenthood abortion facility to direct women to life-affirming options and present a 'pro-love' message, including handing out roses. Photo courtesy of Bonnie Pritchett 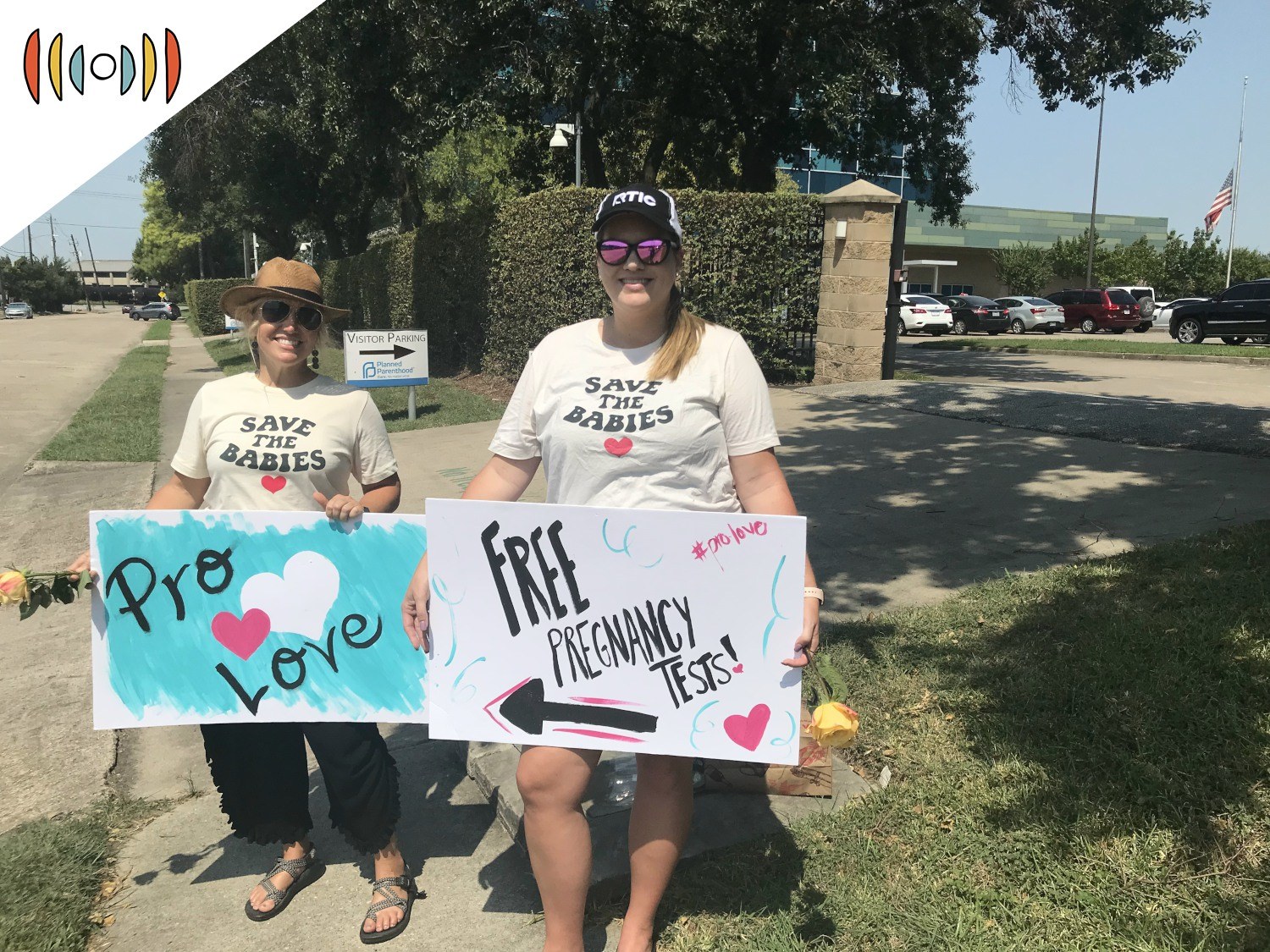 BROWN: Not long after the law went into effect, the Biden administration filed a lawsuit seeking a restraining order. A federal judge will hear arguments in that case on October 1st. The first lawsuits against abortionists who violated the law also reached state courts this week. They could set up a constitutional challenge to the abortion limits.

Until then, pregnancy resource centers are stepping up efforts to counsel women faced with making a very fast, life or death, decision.

BONNIE PRITCHETT, REPORTER: Outside the nation’s largest Planned Parenthood facility in Houston, it appears little has changed since September 1st.

Cars still come and go from the fenced-in complex. Sidewalk counselors stand ready to speak with anyone willing to listen. People pray. And the Houston Coalition for Life’s mobile ultrasound unit is parked where it’s always been—across the street.

On this steamy afternoon, Sheri Frankum and Andrea Luster are standing at the parking lot entrance. They hold up posters directing drivers to the bus where pregnant women can get a glimpse of the life growing inside them.

Frankum explains why they made the hour-long trip from their homes in Southeast Texas.

SHERI FRANKUM: So, we have a group at the central Assembly of God in Angleton. And it's called Embrace Grace. And it's for single moms that have chosen life. It's like a support group, give them a baby shower. They're ready for the baby. We love on them. And we work with the Pregnancy Help Center Lake Jackson also. And so, it's just been on our heart to come out here and pray and try to talk to some people…

Texas’ new heartbeat law, for all intents and purposes, bans abortion in the state. This is the moment pro-life advocates prayed for. Fought for.

But were they prepared for it?

JAMIESON: You know, I would love to say that the pregnancy centers, you know, my colleagues, that we were all completely prepared for this. I think a little bit, we were like, you know, this is uncharted territory in a lot of ways…

That’s Leanne Jamieson, director of the Prestonwood Pregnancy Center. It serves women in the Dallas-Fort Worth area. She and her colleagues across the state have seen an influx of clients since the law went into effect. Jo Markham kept count. She’s director of the Agape Pregnancy Resource Center in Round Rock, north of Austin.

MARKHAM: I ran numbers last week. So, since the law went into effect on September 1, we've seen a 38 percent increase in clients over the same time in August. And of those, most of them are abortion minded or abortion vulnerable.…

Markham and Jamieson say the women are panicked. Mad. Scared. More than usual.

Before the new law went into effect, Texas women had up until the 20th week of pregnancy to decide whether to have an abortion.

JAMIESON: But often also it was a standing weekly appointment where they came in and they sat with someone, and they got good guidance, and they discussed their situation. That element is gone for us. And so you know, Praise Jesus, that we have the Holy Spirit and his wisdom, but we are learning to pivot. And so, you know, no longer is the discussion, okay, you know, you've got time, but it's about how do you make a healthy decision…

Markham says they may not know it yet, but the heartbeat law is sparing women from the horrors of abortion.

Both Jamieson and Markham know these frantic women can still decide to have an abortion in a neighboring state. And, so, for the most part, the heartbeat law hasn’t changed the way pro-life pregnancy resource centers operate.

JAMISON: You know, we just take it day by day. I don't know what the future of this law looks like for the state of Texas. I guess at the heart of it, our ministry didn't change with the law. It changed our client's situation more than it changed how we love and operate. Yes, we had to fine tune a few things. But at the heart of it, our mission has not changed. Jesus has not changed. The law changed.

If the heartbeat bill survives the legal challenges, Markham and Jamieson are confident their donors and volunteers are prepared to meet any increase in need.

FRANKUM: Yeah, I know, just from our experience with our church, and it's not a big church, but they step up every time, every shower, we have, even through the pandemic, they have bombarded us with diapers and wipes. And that's all God, you know. So, I feel like, if we had an overwhelming onslaught, I feel like he always makes a way…

Luster called on people who say they are pro-life to, well, act like it.

FRANKUM: I feel like our little group will step up. Yeah, I do feel like it's time for those who say they believe a certain thing, like Sherry said earlier, to put their time and their money and their effort where their mouth is, and get off, get off the social media sharing little squares and little pictures and little opinions and do something.