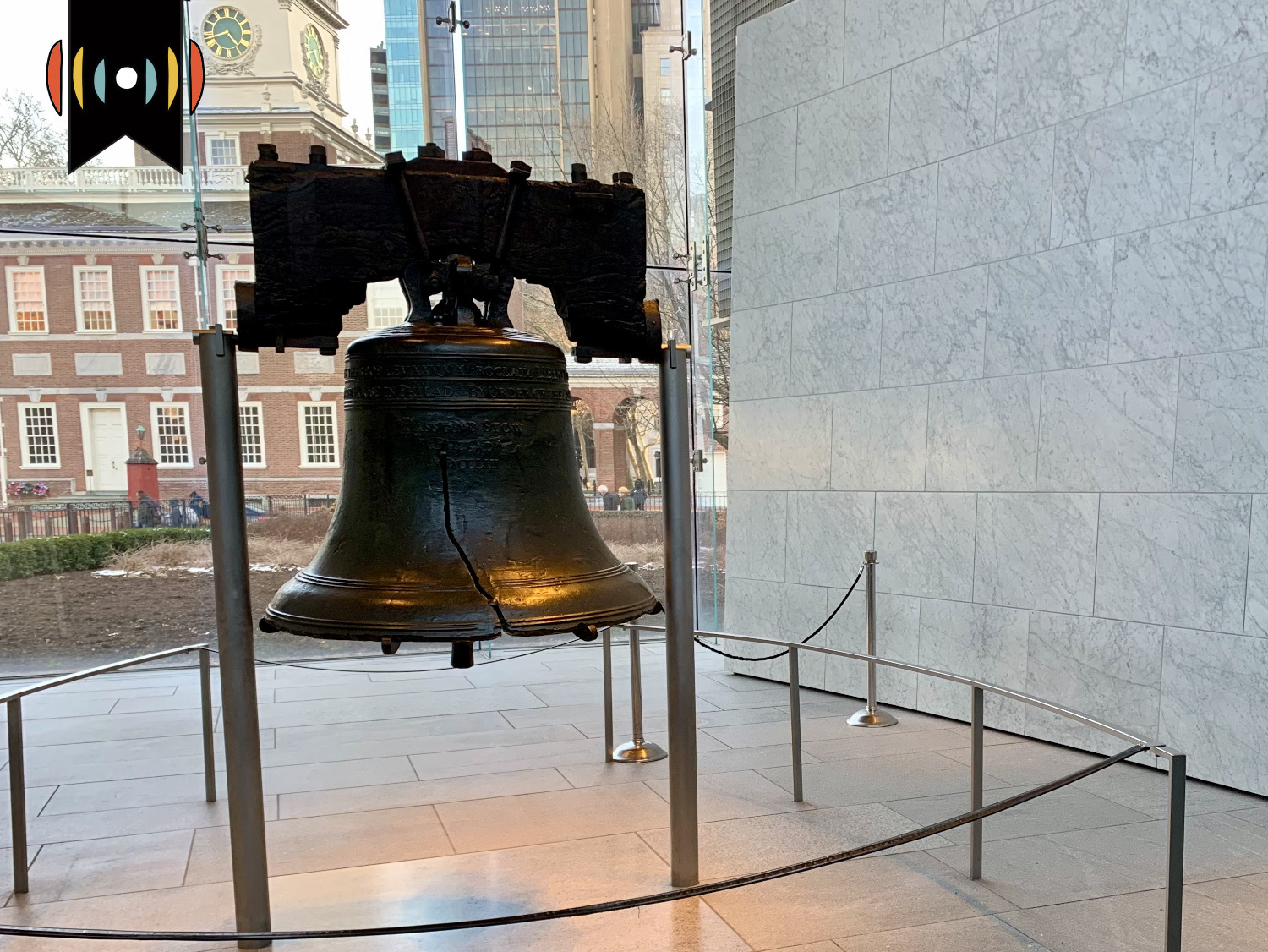 MYRNA BROWN, HOST: Today is Thursday, June 30th. Thank you for turning to WORLD Radio to help start your day.

Well, we’ve arrived at the last day for our Spring Giving Drive and not just because it’s officially Summer now!

I want to take this moment to say thank you so much for your generous support of our work. It does allow us to pursue our mission of biblically objective journalism and allows us to be bold in pursuit of it. We’re sooo close to our goal but not quite there. I do hope this will remind you if you haven’t given yet, to please visit WNG.org/donate and help us reach or even exceed our goal. Thanks again!

Coming next on The World and Everything in It: Let freedom ring! The Fourth of July is right around the corner, and it has us looking back at our nation’s beginnings. There may be no better place to do that than historic Philadelphia, Pennsylvania.

BUTLER: Earlier this year WORLD Senior Writer Kim Henderson paid a visit to Independence National Historical Park in the heart of that city. 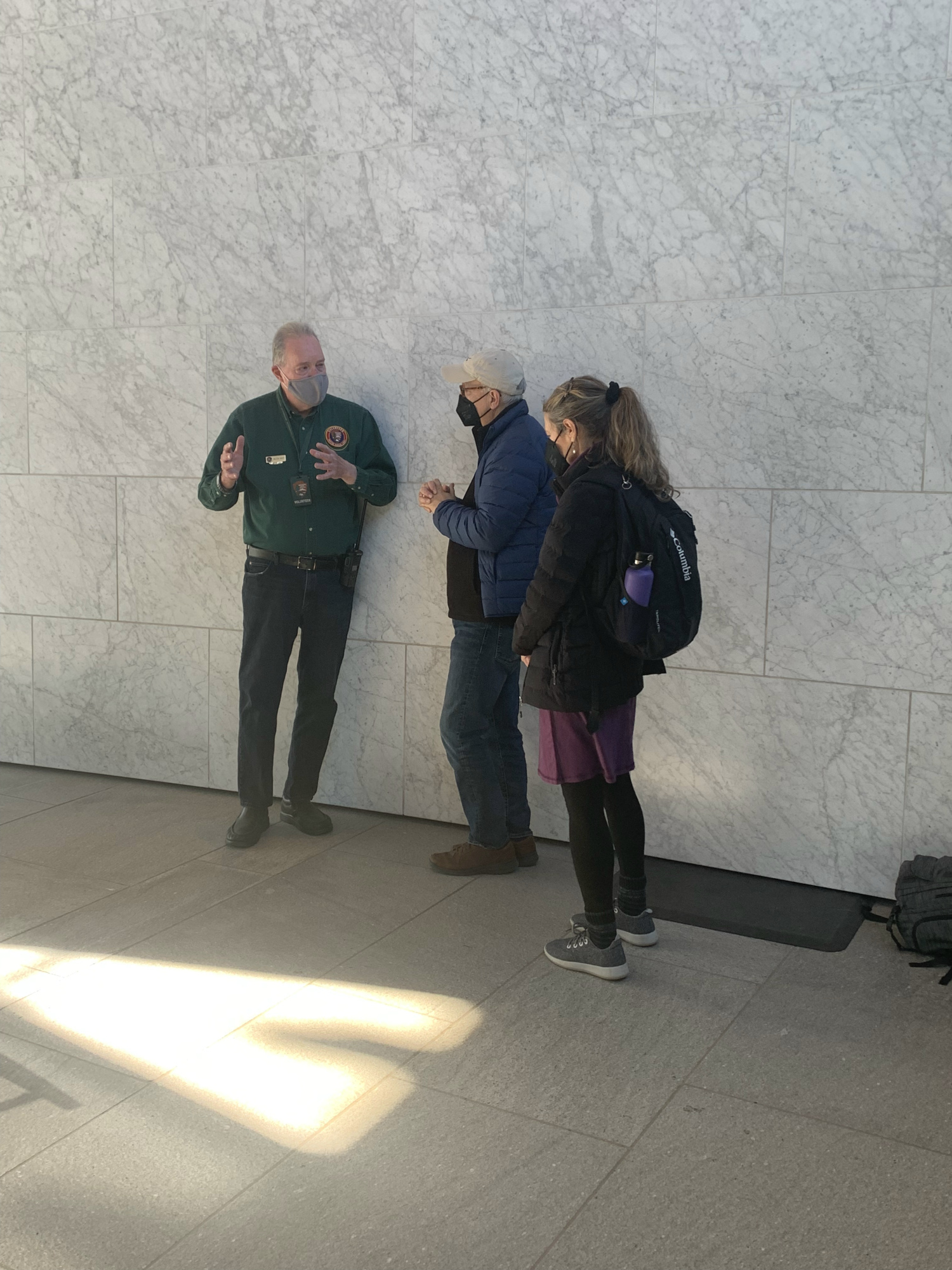 WIEST: I love being here. And then in the West Wing, which is closed now, where we have a Declaration and Articles of Confederation and the Constitution . . .

Wiest really has to know his stuff.

WIEST: It was 1789 [WOMAN: when the Constitution was right, finally ratified 1787 was written, but then two years for . . .] WIEST: Yes, to get it. Right. Because under that, in that period, we were still under the Articles of Confederation.

Today Wiest is volunteering in the Liberty Bell Center. He likes the kind of visitor that comes to see this famous symbol.

WIEST: They're going to ask questions, as opposed to a school room where kids have to be there and they don't necessarily have any interest in the topic.

So he’s used to smart visitors, like this man who’s checking out a gauge near the bell. 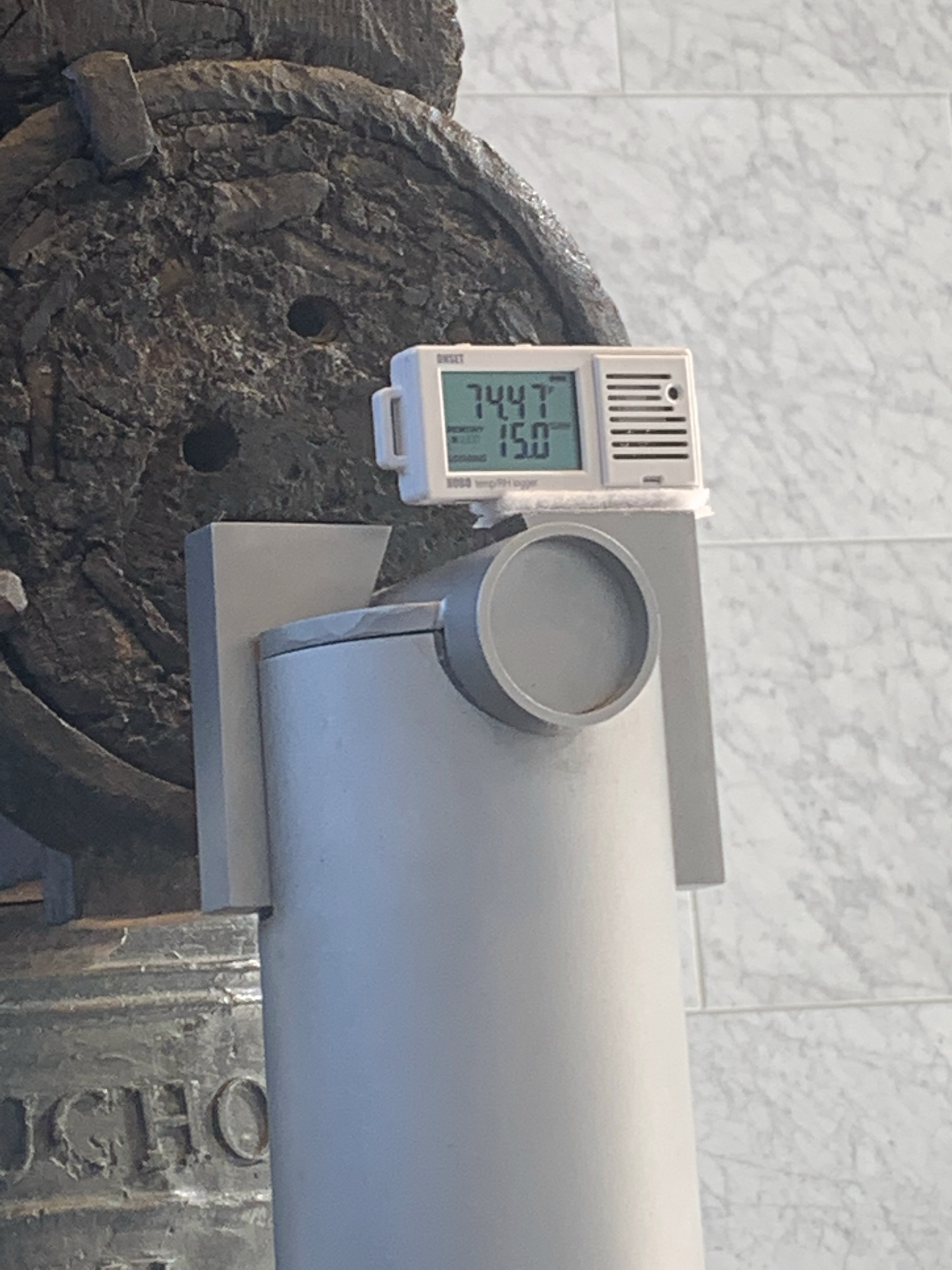 MAN: The temperature is 74 degrees Fahrenheit, and the bottom part is 15% humidity. When it gets a certain temperature, he lowers the shades to reduce the heat. [And you were wondering why] why wasn't it automated in a closed loop?

When visitors talk to Wiest, they learn that the Liberty Bell once resided in the steeple of the Pennsylvania State House. Today it’s housed across the street in the Liberty Bell Center. The center includes an outdoor interpretive area, an exhibit hall, and an impressive bell chamber with high ceilings and generous walls of windows and light. The bell is visible from the street 24 hours a day.

WIEST: It's made of bronze, which is a mixture of metals. It has iron, it has zinc, it has tin.

That mix of metals in the Liberty Bell matters. No one living today has heard the bell ring freely with its clapper. Wiest explains why.

WIEST: At home when you want to make the cake, you have eggs and butter and milk and flour. And if you leave one of those ingredients out, the cake doesn't come out right. Well, that's what happened to the bell. It didn't have the right ingredients. So when they rang it, it cracked.

It did crack—twice—and that silenced the Liberty Bell forever. But thanks to modern computer modeling and some grad students at Penn State, we have an idea of how it once sounded. How it sounded back when Benjamin Franklin heard it every day. 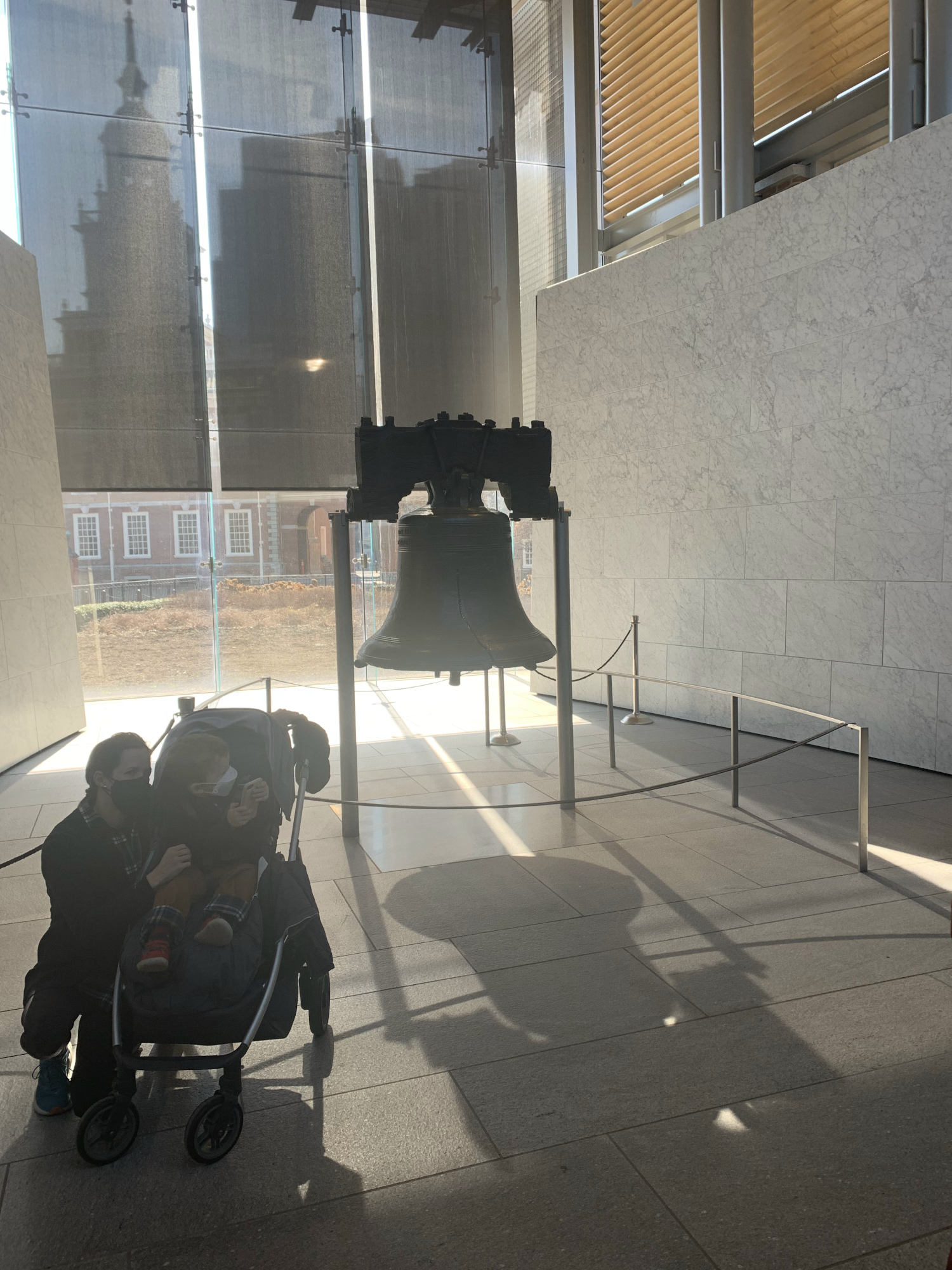 More than a million people come to see the Liberty Bell up close each year. They marvel over its scarred beauty, its yoke, its mass. The beloved 3-foot-tall symbol weighs in at more than 2,000 pounds.

Weist remembers one visitor who couldn’t take in the sight, though.

WIEST: A couple years ago, I was here at the bell. Not a lot of people, but a few people around, coming down the aisle was another ranger.

The ranger was escorting a mother and her highschool-aged son.

WIEST: Totally blind. With a stick. And I'm thinking, “Okay, how's he going to do this?”

Wiest said the whole place grew silent as the mother held the stick and the ranger took the boy’s arm.

WIEST: He took the boy's finger and let him trace the crack all the way down. And he after he did that, he then took his fingers up and found the word “liberty” and traced the boy’s finger on the word liberty.

The crowd remained quiet and still as the boy reached up further and touched the wooden yoke.

WIEST: It was silence. I mean, it was just silence. And it was just such a marvelous thing. How else would this boy know what he's here for? . . . How does a blind person see the bell? 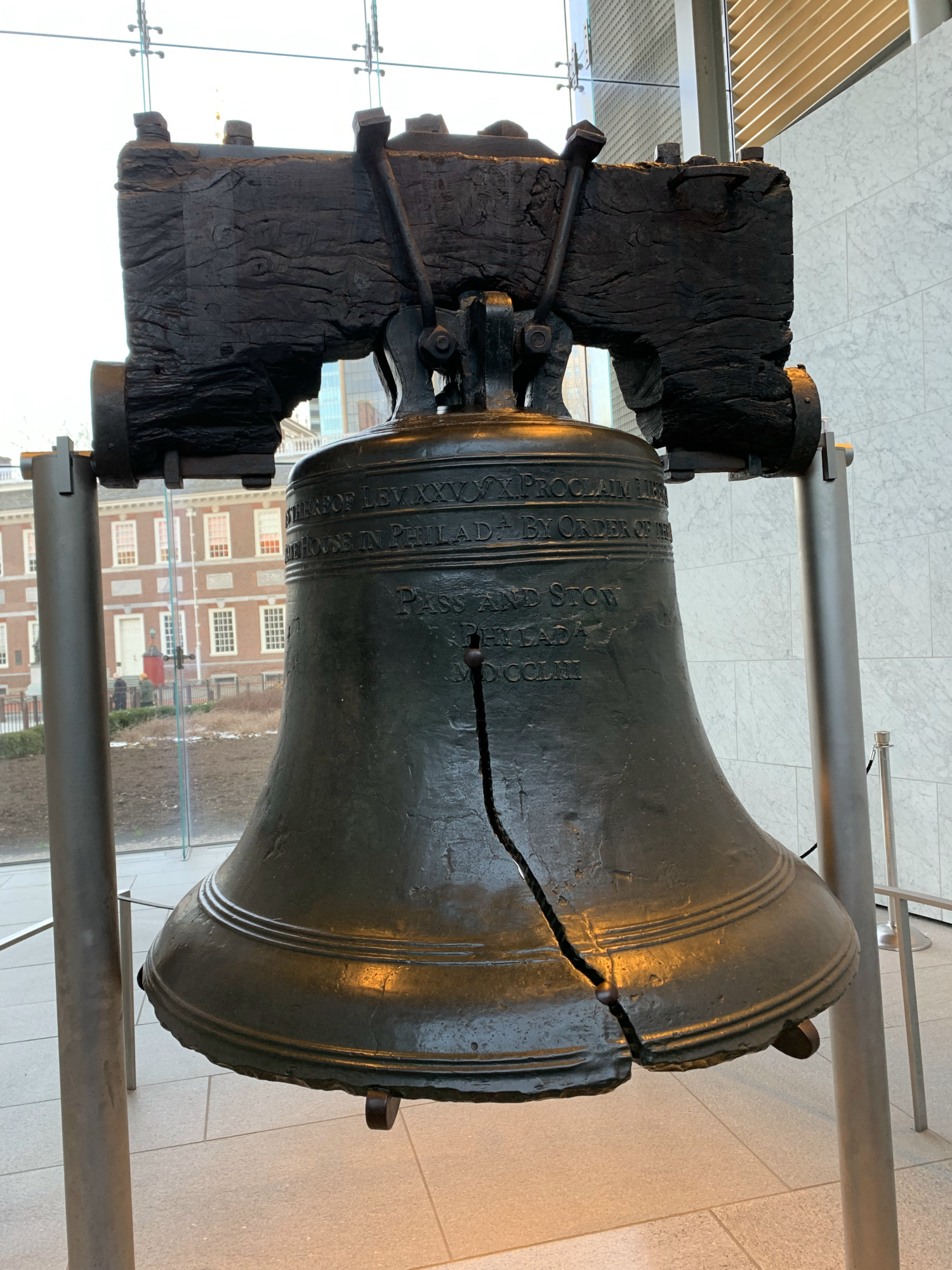 Pennsylvania lawmakers commissioned the bell in 1751, but that bell cracked on its first test ring. Local metalworkers John Pass and John Stow melted down that bell and cast a new one right here in Philadelphia. Just like the original bell, it has an inscription around the top that comes from the book of Leviticus. It reads: "Proclaim LIBERTY Throughout all the Land unto all the Inhabitants Thereof."

The bell that so many people come to see today fell into relative obscurity after the Revolutionary War. But abolitionists adopted the bell and its biblical message as a symbol in the 1830s. That’s when it became known as the "Liberty Bell."