A Supreme Court case challenging the limits of government surveillance

The Supreme Court is seen on the first day of the new term, in Washington, Oct. 4, 2021. J. Scott Applewhite/Associated Press Photo 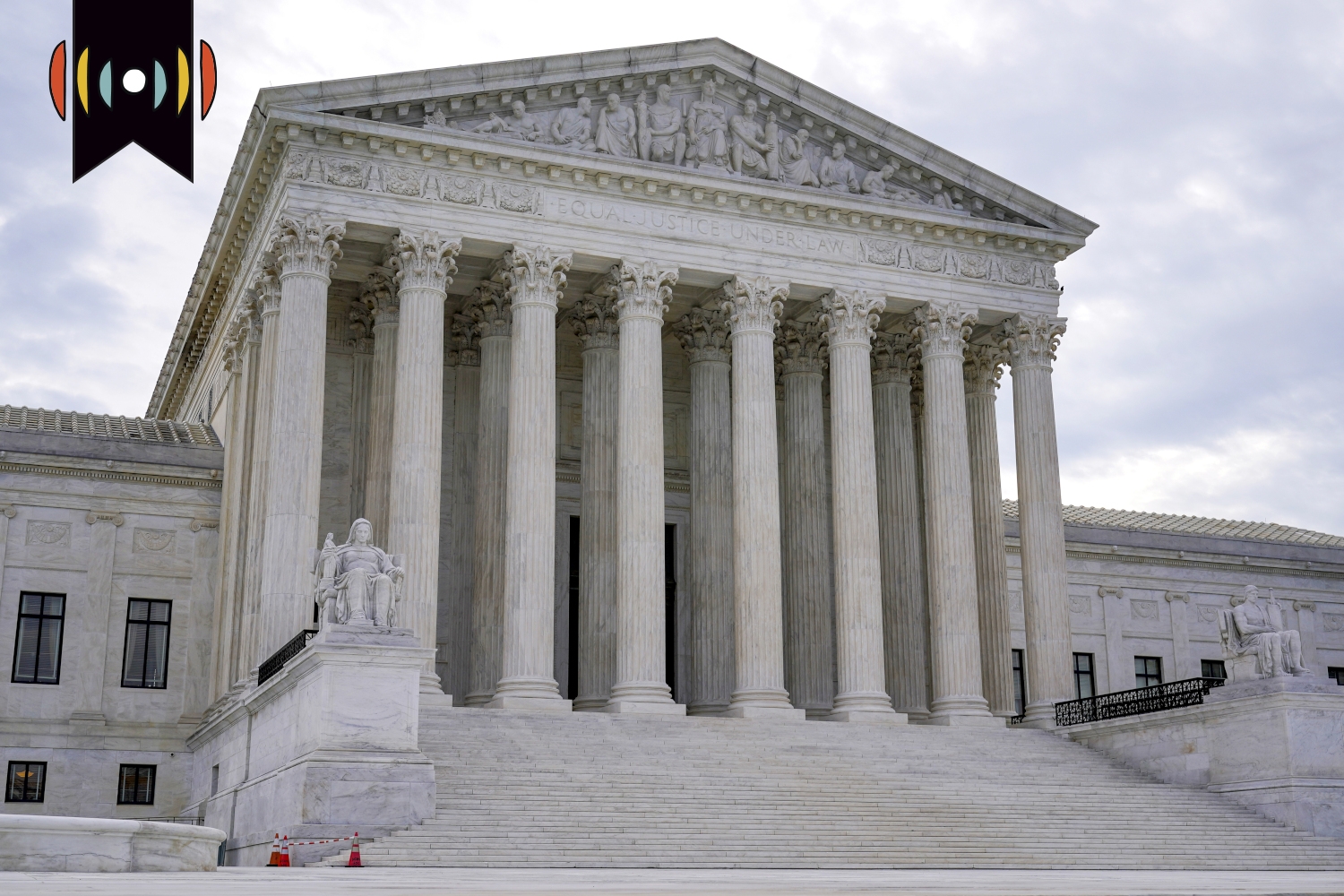 NICK EICHER, HOST: It’s Monday, December 13th and we’re so glad you’ve joined us for today’s edition of The World and Everything in It. Good morning. I’m Nick Eicher.

EICHER: Received a kind note from a listener who worried we may be talking about the giving drive a little too much and I respect that and want to be sensitive to that. So let me keep this short and to the point:

You may be in a position to give out of more illiquid assets—in other words, you may want to donate appreciated stock and you can do that very simply online at WNG.org. I want to call your attention to the “GIVE” button at the top right hand corner—when you hover over that, you’ll find an option to give stock. You can select that and just follow the process.

I want to mention that today because it’s helpful to get stock gifts in earlier rather than later in December to make sure you get the tax benefit this tax year because it does take a little time to convert that.

Now, you can also give through a donor advised fund if you have one, something like the National Christian Foundation, for example. But all that info is just a click away at WNG.org, hover over the “GIVE” button and you’ll see what I’m talking about.

So that’s it for today and let’s jump into this week’s Legal Docket.

REICHARD: On Friday, the U.S. Supreme Court left in place a 6-week abortion ban in Texas while it permits doctors and abortion businesses to proceed with their legal challenges in lower court.

The Texas Heartbeat Act authorizes anyone to sue anyone else for aiding and abetting in an abortion of an unborn child six weeks’ gestation or older.

The big issue is not the merits of the law. It’s about identifying which party is responsible for enforcement, because the typical state authorities are not responsible in this case. Eight justices agreed to limit the ongoing challenge to the law as against only state medical licensing board officials. But not against state’s judges, court clerks, attorney general, or even an activist pro-life pastor.

EICHER: It’s entirely possible the case may return to the High Court again if the same scenario plays out as it did before. That is, a trial judge issues an order invalidating the law, and then the U.S. Court of Appeals for the 5th Circuit issues an order reinstating it.

As for the Biden Justice Department's challenge, the court dismissed it as improvidently granted known by the acronym “DIG” and meaning the court mistakenly accepted the case to begin with.

REICHARD: On to oral arguments now, two of them from last month.

First, a dispute over government surveillance after 9/11. Not long after that horrific day, President George W. Bush signed into law The Patriot Act. It greatly expanded the authority of the FBI to monitor Americans.

One surveillance project took place in Orange County, California. For over a year, the FBI paid an informant to pose as a convert to Islam and secretly record conversations with Muslims.

In 2011, three of the men the FBI spied on sued the FBI. They say the agency targeted them solely because of their Islamic faith, in violation of their constitutional rights.

EICHER: The weekly public radio show, This American Life, aired a series about this back in 2012. A quotation from an Egyptian man the producer did not name underscored one of the problems that arose after the surveillance came to light:

AYMAN: Really, what they did is they made everybody in the mosque not trust everybody. Nobody would talk about it, but nobody—you would see some weird looks, you know what I mean? People are looking at each other weird.

Suspicion abounded, even in unexpected directions.

Some of the Muslim men under surveillance reported the FBI’s paid informant to the FBI! That informant scared them, as being a potential terrorist.

For its part, the FBI says it can’t disclose those recordings without putting national security at risk. The agency claims the “state-secrets privilege.” That allows government to resist orders by a court to disclose information during litigation, if there’s a reasonable danger that the disclosure would harm national security.

REICHARD: So the legal question is whether the state secrets privilege means case dismissed, or, whether the Muslim men could use another law to permit a private review of evidence by a judge. The Foreign Intelligence Surveillance Act, known by the acronym FISA, permits that private review and restricts when the federal government can conduct surveillance without a warrant.

But lawyer for the Muslim men argue that his clients have a right to due process. And FISA’s entire point aims to stop the persecution of minority groups.

ARULANANTHAM: Congress might have looked—seeing a backdrop of abuses identified in the Church Committee, surveillance of Vietnam War protestors and MLK and even a justice of this court, I believe, they would have said we don't just want to know whether this is secret. We also want to know did you break the law.

The individual FBI agents had their own lawyer. She argued it’s unfair to let a claim against the agents proceed, even with a judge’s private review determination. If the judge sides with the government that the information is a state secret, then her clients can’t defend themselves. That information wouldn’t be available to them.

Justice Alito asked about that. What if the judge in private review says what the government did was based on religion alone, rendering it illegal? Would that end the case for the individual FBI agents because they can’t access info to defend themselves?

Arulanantham, lawyer for the Muslim men, answered “no.”

ALITO: How can that possibly be consistent with—with due process?

“Star Chamber,” a pejorative term for a proceeding that’s grossly unfair. Star Chambers were used during the Middle Ages, and they were the subject of a 1983 movie starring Michael Douglas, a fictional story about a secret panel of judges fed up with bad guys getting away with crimes over legal technicalities.

Civil libertarians warn that the federal government abuses the state secrets defense to get challenges against it dismissed, especially when it comes to warrantless surveillance.

The justices are aware of this risk, but they also didn’t seem to agree on a way to let the Muslim mens’ lawsuit proceed. I suspect they’ll remand the case.

This last dispute today is over those digital billboards, the ones that change every so many seconds to a new ad.

Billboard companies like digital signs because you don’t need to send someone out there with a ladder to change the ads. A computer can instantly update them.

But the City of Austin, Texas has a rule about all this. If you want to convert an old style billboard to digital, you can only do that for signs that advertise on the premises of the business or activity advertised on the board.

So if you have an old style billboard on your business premises right now, you can’t trade it out for a digital one.

The city says that’s for aesthetic and public safety reasons.

The billboard company says that’s a violation of its free speech rights.

And this really is a big deal. Justice Brett Kavanaugh:

KAVANAUGH: Unlike some of our decisions, this decision is going to affect every state and local official around America. They spend a lot of money and a lot of time trying to figure out how to comply with the First Amendment implications of sign ordinances.

Here’s the problem. Signs are a form of speech. If the government wants to regulate speech that’s based on the content of what is said, the law presumes the government can’t do that without a compelling reason. Even then, the restriction must be narrowly tailored to achieve that purpose.

Or is it just policing the location of the sign, as the city of Austin argues?

Justice Neil Gorsuch had a hypothetical to test out what “content” means. Listen to this exchange with lawyer for the billboard company, Kanon Shanmugam:

GORSUCH: Let's say a sign just says "Black Lives Matter." I think we'd agree that that's not an off-premises sign because it doesn't identify a particular location. Is that right?

SHANMUGAM: Yes. I would say that that would not qualify as an off-premises sign because it's not advertising an activity.

GORSUCH: But what if Black Lives Matter has a local office and it isn't there?

SHANMUGAM: Well, I mean, it would be a question for Mr. Dreeben. I think he would say that sign does not advertise an activity, business, or person.

GORSUCH: So that one’s okay?

GORSUCH: How about—how about if it says "Black Lives Matter, Do Something About It," anticipating an upcoming rally, but no information is provided?

SHANMUGAM: I mean, that seems like it might be advertising an activity at that point. And, again, I don't mean to—

GORSUCH: So that one might not be permissible. And—and then what if it gives the date and the time of the rally?

SHANMUGAM: At that point, it seems more clearly to be advertising a particular activity.

GORSUCH: And so an official would have to—somebody's going to have to read this and decide which side of the line these four examples fall on.

Justice Alito a hypothetical of his own:

Signs about Black Lives Matter, signs in Chinese, and then a sign about Justice Stephen Breyer’s hypothetical Kale shop:

BREYER: All right—my own kale shop, I sell fried kale, and right outside I want a big picture of kale that lights up, okay? It's mine. This is my shop. I want to decorate it the way I want. A strong interest! I don't have the same interest in what the billboard 40 miles outside the town says about my kale shop. Okay?

Most of the justices didn’t want to define what is “content based” speech too broadly, nor did they want to disrupt the thousands of regulations around the country on billboards.

As Justice Elena Kagan put it:

KAGAN: Down that road, madness lies.