Legal Docket - The hands that hold the gavels

WORLD Radio - Legal Docket - The hands that hold the gavels

Who has President Biden nominated to fill vacancies on the federal courts?

In this Wednesday, April 28, 2021, file photo, Ketanji Brown Jackson, nominated to be a U.S. Circuit Judge for the District of Columbia Circuit, testifies before a Senate Judiciary Committee hearing on pending judicial nominations, on Capitol Hill in Washington Tom Williams/Pool Photo via Associated Press 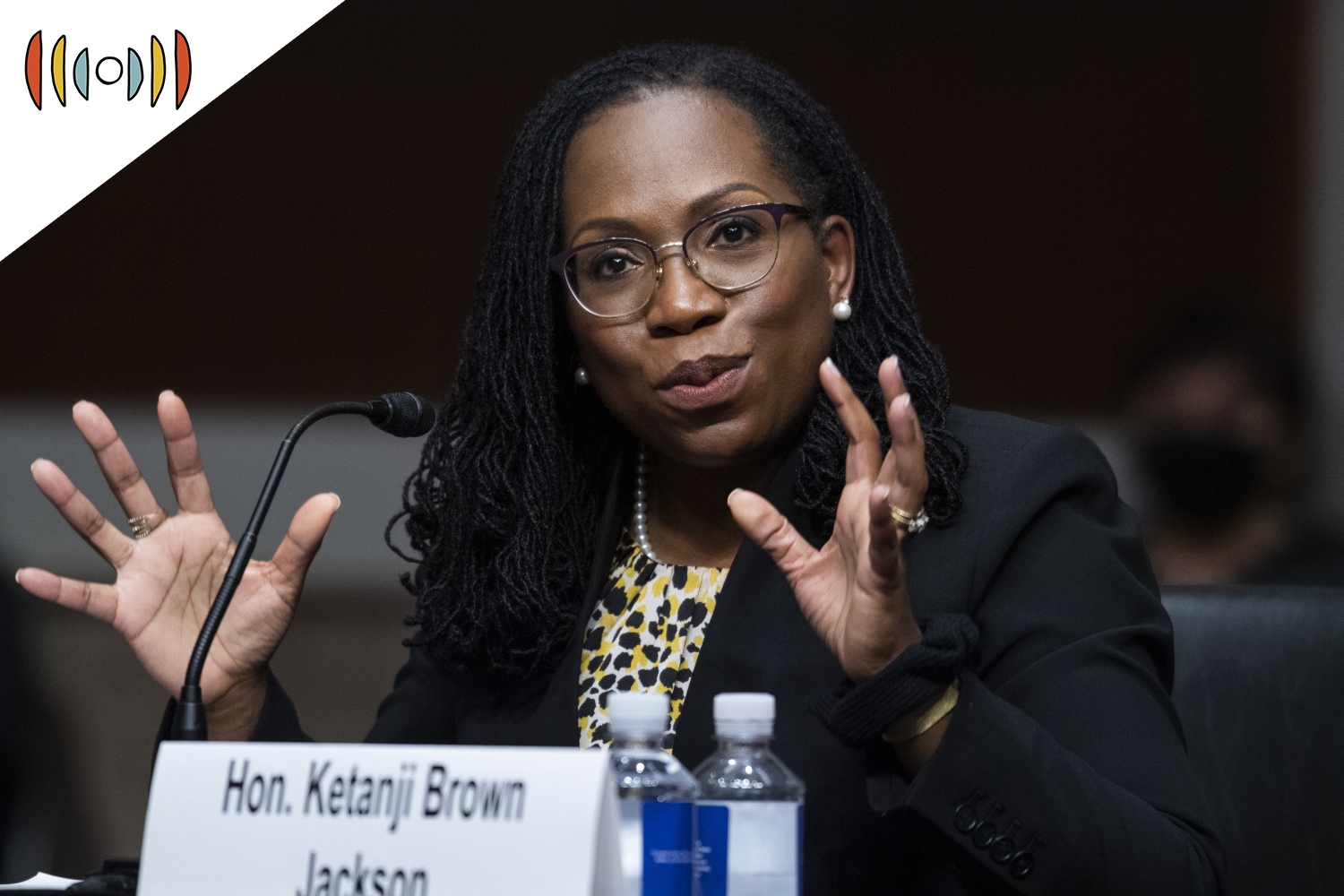 MARY REICHARD, HOST: It’s The World and Everything in It for this 23rd day of August, 2021. We’re so glad you’ve joined us today. Good morning! I’m Mary Reichard.

First, an update on last Monday’s story. It had to do with the law professor at George Mason University who sued the school over its vaccine mandate. Todd Zywicki recovered from COVID-19 and has multiple antibody tests to prove it.

The day after that story ran, the university granted Zywicki a medical exemption from having the shot. Officials gave no specific reason for changing course.

But Zywicki will still have to submit to Covid testing once a week.

REICHARD: Here’s what I received from the school. No one would talk with me about Zywicki’s case, but the school’s PR department sent a five-paragraph statement and I think this is the key passage:

“Professor Zywicki has been treated the same as any other Mason employee and is required to comply with all Mason policies regarding vaccination, testing, face coverings, physical distancing, and other COVID safety precautions. His litigation had no impact on the consideration of his request for a medical exemption from the vaccination requirement.”

Since taking office, the president has kept a campaign promise—and sent a steady stream of judicial nominees to fill vacancies in those courts.

At first glance, Biden’s nominees appear to align with campaign promises: to wit, promising his progressive supporters he’ll make “diversity” the centerpiece of his choices.

Yet, some progressives are unhappy, saying his nominees are not diverse enough.

REICHARD: Here to talk about it is Maryrose Delahunty. She is a practicing attorney and correspondent for World Magazine, and wrote about this topic for the August 28th issue.

MARYROSE DELAHUNTY, REPORTER: Thank you. I’m glad to be here!

DELAHUNTY: Sure. As of his last round of judicial picks, President Biden has sent 33 candidates to the Senate to fill open positions for judges on the federal district and appeals courts.

REICHARD: So 33 candidates so far. Before we get to that, how does President Biden’s pace of nominations and confirmations compare to past presidents?

REICHARD: And tell us about some of these candidates?

DELAHUNTY: Well, twenty-six are women. Twenty-three are people of color, and two identify as lesbians.

REICHARD: President Biden touted LGBT diversity in his latest round of nominations this month. Not something Christians put forth as a characteristic of merit for the job of judge.

Not to conflate sexual orientation with race or sex here. Women make up 70 per cent of his nominees. People of color make up 78 per cent.

Am I correct to suppose progressive supporters of the president are pleased?

DELAHUNTY: I can answer that like a lawyer: yes and no. Most of his nominees do check the boxes for progressive ideas of diversity- mostly meaning boxes for gender, color, and sexual orientation. Still, progressive advocacy groups are vocal in their dissatisfaction with some of Biden’s choices. Groups like Demand Justice, for example, a progressive left-leaning group that claims its goal is to restore balance to the courts by implementing reforms, such as expanding the number of Supreme Court justices.

REICHARD: Let’s talk specifics. Tell us about a few particular judges that caught your attention.

DELAHUNTY: One is Judge Zahid Quraishi, previously a federal magistrate judge and two-time Iraqi war veteran. He’s the first Muslim American to ever serve on a Federal Bench with his confirmation to the District Court of New Jersey.

While many celebrated that “first”, Slate reported some Muslim Americans in the legal community were hostile to his nomination. Opponents cite his prior work as a problem. He worked for U.S. Immigration and Customs and as an Army legal advisor for detention operations in Iraq.

Another nominee is Regina Rodriguez. She has a Mexican American Father and a Japanese American mother. She’s confirmed to the District Court of Colorado. Progressive groups criticize her for her background as a former prosecutor and corporate lawyer representing large companies such as Eli Lilly and Bristol-Myers Squibb.

REICHARD: I can guess the answer to this, but why would her background elicit criticism from these progressive groups?

DELAHUNTY: Demand Justice views the federal bench as already too packed with judges brought in from large law firms that mostly represent corporations. They want a bench with more judges who have experience as “civil-rights litigators, public defenders, and legal-aid lawyers.”

That belief was echoed in a letter that White House Counsel Dana Remus sent to Senate Democrats. She requested, and I quote here: “individuals whose legal experiences have been historically underrepresented on the federal bench.”

Others from Biden’s base complain that the bench needs more judges with experience representing consumers and workers.

REICHARD: Maryrose, you looked into this. How serious do you take these criticisms?

I recently spoke with Thomas Jipping, a Senior Fellow at the Heritage Foundation. He served as chief counsel on the Senate Judiciary Committee under Senator Orrin Hatch. According to Jipping, the objections are basically a smoke screen to make Biden’s picks appear to be more mainstream than they really are.

REICHARD: We’ll get to that as a strategy in a moment. But for now what else can you tell us about some of the other nominees?

DELAHUNTY: Certainly each the nominees have unique characteristics, but I’ll highlight three nominees announced earlier this year who’ve been confirmed.

Judge Tiffany Cunningham is the first black judge to sit on the U.S. Court of the Federal Circuit. She’s a Harvard Law grad with a Bachelor of Science from MIT. She once practiced patent law.

And she’s followed by Judge Candace Jackson-Akiwumi, the second black woman to serve on the 7th Circuit Court of Appeals. She’s a Yale Law alumni with 10 years as a public defender who represented over 400 indigent clients.

Judge Ketanji Brown Jackson is also a former public defender. She was confirmed to the DC Court of Appeals. And as you know, Mary, that court is viewed as the farm team for future Supreme Court justices. Judge Jackson has the bona fides for a potential high court nomination: undergraduate and law degrees from Harvard, law clerk to three federal judges including Supreme Court Justice Stephen Breyer. And prior to her confirmation, she sat on the US District Court for DC. Only one thing is lacking: an actual vacancy on the High Court.

REICHARD: She sounds like someone to keep an eye on?

REICHARD: Maryrose, we mentioned a strategy earlier by groups like Demand Justice. Why do you think they seem so zealous to advocate for particular judicial nominees?

DELAHUNTY: These groups see the federal courts as being in crisis because of the conservative judges President Trump added to the bench. Groups like Demand Justice, the American Constitution Society and Take Back the Court. Trump successfully appointed over 230 total, including 54 to the appeals court and three highly publicized Supreme Court justices. Progressives see that as a serious imbalance in the federal judiciary.

DELAHUNTY: Yes, but according to Heritage Fellow Thomas Jipping who I mentioned earlier – the words liberal and conservative are political terms. The actual distinction is a difference between ends and means. Outcomes versus process. Judges are supposed to follow an objective process, whatever the result, like a baseball umpire. An umpire doesn’t pick who wins or loses, he applies the rules impartially.

The kind of judge advocated by the Left is one who focuses on outcomes, what political interests they serve and what political outcomes they want to achieve.

REICHARD: Many consider the most important judicial appointments to be those to the U.S. Supreme Court. But that’s not true, is it?

DELAHUNTY: It’s not true. The power judges wield at federal district and appellate courts should not be underestimated. Of the over 7,000 cases submitted each year for appeal to the Supreme Court, the justices accept only 100-150 of those cases. For the remaining cases, the appellate courts have the final say.

REICHARD: And Americans live with the results of those lower court decisions in critical areas, including vaccine mandates, religious freedom, and abortion – just to name a few.

DELAHUNTY: Right! You’ve heard the saying “the hand that rocks the cradle may rule the world, well, in modern society – the hand that holds the gavel makes the laws.

REICHARD: Certainly seems that way! Maryrose Delahunty is a correspondent for World Magazine. You can find her articles at wng.org. Thanks for joining us today Maryrose!